The elections in France's 18 administrative regions, five of which are overseas territories, were supposed to be a boost for far-right candidate Marine Le Pen's campaign in the 2022 presidential election.

Polls ahead of the first round of voting on June 20 were showing Le Pen's National Rally (RN) party ahead in the first ballot in six regions, and with a good chance to win the following week's runoff vote in two of them.

Winning the presidency of a regional council would have been a first for the party and an occasion to show it can govern — not just in cities, but regions with budgets of several billions of euros and responsibilities that include transport, education, economic development and regional planning.

"There are dynamics around the National Rally [RN] which allow us to say that more and more of the French agree with our proposals," Le Pen told news channel CNews in early June, speaking of her far-right party.

But her high hopes were dashed. Only one of the RN's candidates — Thierry Mariani in the southern region of Provence-Alpes-Cote-d'Azur — made it into the second round of voting on Sunday. And lost.

Is Le Pen's bad result down to voter apathy?

Reacting to the results on Sunday, Le Pen blamed a record abstention rate of roughly 65% — and the governing party of President Emmanuel Macron.

"I'd like to thank all those who have turned out to vote, although everything pushed them to abstain," she said in front of TV cameras, referring to a "disastrous and erratic" election organization, voter disenchantment with Macron's policies and France's "never-ending [COVID] lockdown."

"The presidential elections appear more than ever as the election to change politics and I invite all French people to, from tomorrow on, construct together with me the alternative that France needs," she added, seemingly unabated.

But Vincent Tiberj, professor for electoral sociology at Sciences Po Bordeaux University, said putting Le Pen's defeat purely down to abstention would be too easy.

"Yes, a high share of her voters didn't turn out — but [it was the same with] supporters of the other parties," he told DW. "What's more, the election campaign was very much focused on Le Pen's core topics: immigration, insecurity, Islam — and yet, her party didn't win."

Tiberj added that the fact that polls had predicted a different result put a question mark over their accuracy in general. "Should we now also be more prudent with the surveys that predict Le Pen will be facing President Emmanuel Macron in the runoff vote in next year's presidential election?"

His note of caution is also addressed to Macron, whose Republic on the Move party party (LREM) didn't even make it into the second round in some of the regions. The poor showing for Macron's party led satirical weekly Canard Enchaine to joke on its front page last week that it had become "Republic on the Margins." 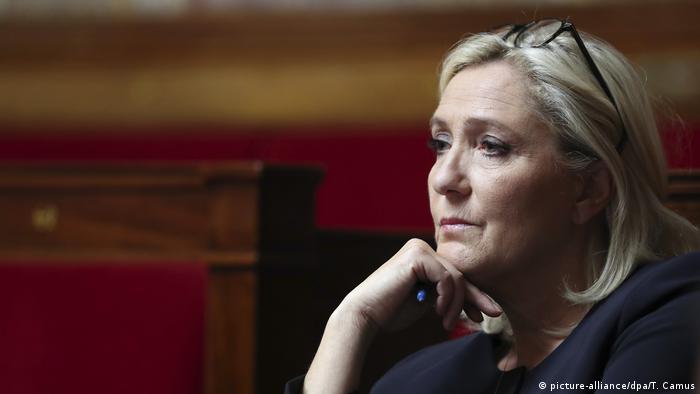 The president, who surged to power in 2017 with his brand-new party, had hoped for another strong outcome and even sent several of his ministers into the election fight.

"The result is a warning shot to his party, which still depends mainly on him as a person and doesn't have a strong foothold in the territories," said Tiberj. "His supporters are clearly volatile and willing to vote for other parties."

Meanwhile, it was a good election night for what Macron likes to call, dismissively, "the parties of the old world."

The Socialists managed to maintain all of their five regions in mainland France, and the center-right Republicans won back all but one of theirs.

"So maybe these parties are not as dead as people were saying after Macron swept to power in the 2017 presidential elections," said Gilles Ivaldi, a Nice-based research fellow for politics at France's National Center for Scientific Research.

Vote for stability in the times of uncertainty

"It seems voters wanted to go with people they knew in the times of uncertainty — instead of testing an extreme candidate such as Le Pen or the far-left Jean-Luc Melenchon," he explained. "Such a vote for stability could happen again and benefit traditional parties, if the [COVID] crisis were still ongoing next year."

Still, the road ahead is far from clear for the traditional parties, he emphasized. "The Republicans would have to agree on one candidate — out of several competing leaders. And the Left would need to join forces, as the Socialists are no longer strong enough to win on their own. But forming alliances has never been the Left's forte."

Political cards have been reshuffled

In any case, Sunday's outcome has changed the game for 2022, thinks Bruno Cautres from Paris-based Center for Political Research at Science Po.

"It contradicts the narrative that the far right is on an unstoppable ascent and shows that candidates from the Republican party can win without partnering with LREM," he told DW.

"What's more, the Socialists did manage to form some alliances with other left-wing parties," he said. "All this will definitely have an impact on the upcoming election campaign."

And there is one other key moment of Sunday's results, said Philippe Marliere, a French-born professor for French and European politics at University College London: the abstention rate, the highest ever in any French election.

"This just shows how disenchanted the French are with our political system and that they don't feel represented by their politicians anymore," he said.

That's something parties will have to address, no matter which one wins next year's presidential election.

France could ease path to parenthood for single and lesbian women

France is poised to lift tight restrictions on medically assisted reproduction, making it easier for thousands of single and lesbian women who until how have faced an uphill battle to have children.

Violence has returned to the streets of France, with yellow vest protesters seeking to breathe fresh life into their movement. While some demonstrators rallied peacefully, others clashed with police and looted stores.