With his "En Marche!" movement, French President Emmanuel Macron has a good chance of becoming the strongest power at parliamentary elections in June. His success can be attributed to his fresh political perspectives. 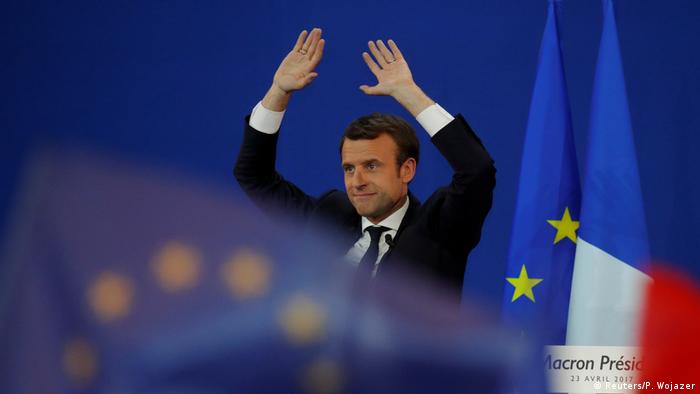 During the election campaign Macron the candidate used the phrase "at the same time" so often that many journalists thought he had some sort of verbal tic. He would declare his position on an issue, then say "… at the same time …" and then he would explain his ideas from another perspective, often one that was completely opposite. 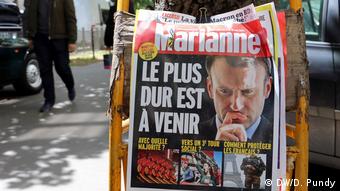 'At the same time' – more than just a tic

Le Monde quotes from one of Macron's speeches, in which he explained why he likes to weave the phrase, "et en meme temps", or "…at the same time…" into his arguments. He explained that the phrase "simply means, that one picks up ideas that appear contradictory, but it is essential for society that they be reconciled."

The conviction that seeming inconsistencies can be reconciled is something that Macron adopted from the philosopher, Paul Ricoeur, with whom he once studied. In this way, a concept from the pinnacle of French philosophical thought has descended into the everyday political arena.

The impact of this can be seen in Macron's cabinet. His ministers come from both the left and the right – and above all, in equal proportion. According to political scientist Eileen Keller, from the Franco-German Institute in Ludwigsburg, "Macron is trying to get past this right-left pattern and to establish a government in the center – a government made up of politicians from the right as well as from the left, in an equally balanced relationship.

One of the other key terms cited by Le Monde in its analysis of Macron's thought process is the term, "revolution." "Revolution" is also the name of the young president's recently published book that came out last November, in which he outlines his political concept. As early as the first page he talked about the "democratic revolution."

This also means that Macron is breaking with the conventional party mentality in France. His predecessors in office – whether Francois Mitterand or Jacques Chirac, Nicolas Sarkozy oder Francois Hollande – were resolute representatives from either the conservative or socialist camps and their respective networks and contacts. Without these networks it is almost impossible to have a political career in France. Almost all of these politicians came from the country's social and academic elite, and many passed through the training ground of the Ecole nationale d'administration (ENA). Indeed this has not changed under Macron: Both he himself and many of his ministers are ENA graduates.

The traditional political order used to correspond to the voting behaviour of the French, writes Thierry Pech, director of the think tank Terra Nova, in his book "Insoumission" ("Insubordination"). "The elections used to consolidate this type of partisan mentality with their own strategies and programmes. This gave French democracy a bipartisan character, which left little room for dissidence and minority movements."

Macron has brought movement into the traditional order, says Eileen Keller. "The president has cracked the old logic of partisanship. Thereby he stands out as a kind of political entrepreneur who wants to set something in motion."

More and more French seem to be buying into this desire to start a new era. A new parliament will be elected on June 11. Amongst the candidates are representatives of Macron's still young "En marche!" movement. Polls are predicting good chances for the movement. According to the most recent opinion polls "En marche!" could count on up to 330 of the 535 seats in total, claims French paper Les Echos.

Macron likes to explain this – albeit preliminary – success with another favourite term: "roman national". What he means by this is the belief that the French, despite all prophecies to the contrary, are quite capable of turning their future to the better after decades of crisis. Macron likes to quote the heroes of French history and he calls on the French to collectively lift their spirits to start something new.

This spirit, says Eileen Keller, is for example reflected concretely in Macron's initiative to fight the most pressing social and political problem of the country: the high unemployment rate. "Macron wants to do this in close consultation with social partners. He wants to make the job market more flexible and he wants to extend the powers of the social partners for that purpose." According to Keller, their responses have been positive. "They have signalled their willingness to reform."

Macron wants to change many things. He wants to standardize the pension scheme, which currently consists of a good two dozen different retirement funds with vast differences in contribution rates and benefits. Unemployment insurance is to be administered by the government in the future instead of the current practice, where it is administered by employers and unions. He wants to limit the size of school classes in deprived areas to twelve students. And employers will not have to pay social security contributions for up to three years for employees who graduated from schools in these neighbourhoods, which are typically inhabited by migrants. This is supposed to facilitate the integration of these youths into the job market. Whether this is sufficient for a real "democratic revolution" a la Macron remains to be seen.

He will likely say this many times again: "…et en meme temps"- "…and at the same time". It seems at least that Macron has inspired the French to think in more complex and different ways. Perhaps he will succeed in uniting this nation that is deeply divided, not only ideologically, but also socially.