France's new president has traveled to Berlin aiming to reinvigorate the Franco-German relationship. After talks, Chancellor Angela Merkel said the two countries would work together on a new road map for the EU.

He was received with military honors ahead of the talks at the chancellery, where the two shook hands and greeted each other warmly in front of a large group of onlookers ahead of the closed-door discussions.

In remarks to reporters afterward, Merkel said the two had agreed to "breathe new dynamism" into French-German cooperation, including a meeting of ministers from both countries in July, after France has held legislative elections.

Merkel said the pair wished to develop a "road map" to strengthen the European Union and the eurozone.

Both said they were open to changing existing EU treaties as part of their modernization efforts, if need be.

"In the past, the subject of treaty change was a French taboo. It will no longer be the case," Macron said.

During their talks, it was expected that the leaders would have discussed one of Macron's most controversial ideas - a shared budget for the 19 countries which use the euro currency.

Under his proposal, the move would also include creating a new finance minister for the eurozone. Macron has said such measures would allow for joint investments and help the eurozone better cope with financial crises. The idea has been met with skepticism by some in Germany, Europe's strongest economy, which has faced the biggest share of bailouts for weaker eurozone members.

Last week, Merkel's spokesman Steffen Seibert commented on the subject of eurobonds. "I can tell you that the federal government's dismissive attitude toward eurobonds remains valid," when asked if Germany would back Macron should he push for the creation of such financial instruments. Some German politicians are concerned taxpayers would see themselves as once more having to foot the bill for the rest of Europe - in a critical election year.

On Monday, Macron aimed to ease those concerns, saying he did not favor the idea of taking on joint responsibility for old debts in the eurozone. He added that he wanted to set up new investment mechanisms for future projects.

Voter disillusionment at the forefront

The meeting between Macron and Merkel comes amid ongoing challenges to European unity, including the UK's exit from the bloc and the rise of euroskeptic movements across the continent. Germany is gearing up for its own nationwide elections in September. 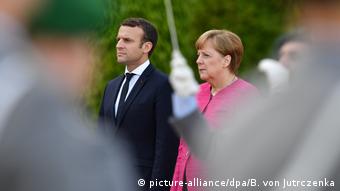 Macron was received with military honors

Macron, who won a second round runoff against anti-EU candidate Marine Le Pen, told Merkel on Monday he had not forgotten the message of "concern and rage" which was also expressed during that election.

Le Pen got more than a third of the vote, and an unprecedented number of people returned spoiled or blank ballots.

"That message reminded us reforms need to be made," Macron said, citing France's long-term inability to deal with mass unemployment as a key area where changes were needed, though he stressed that they would be on France's terms "not because Europe requests it, but because France needs it."

Merkel, whose conservative Christian Democats enjoyed a confidence-boosting victory in a crucial state election on Sunday, nevertheless also acknowledged the concerns that have fuelled euroskeptic movements.

"We are much too slow presently in taking some decisions," Merkel said of the EU.

Emmanuel Macron's win presents the opportunity to reset Franco-German relations to the advantage of the wider EU. But one has to want to do so, says German parliamentarian Franziska Brantner of the Greens party. (14.05.2017)