French President Emmanuel Macron has named centrist Le Havre Mayor Edouard Philippe as his prime minister. The naming of other ministers, usually announced at the same time, has been delayed until tomorrow. 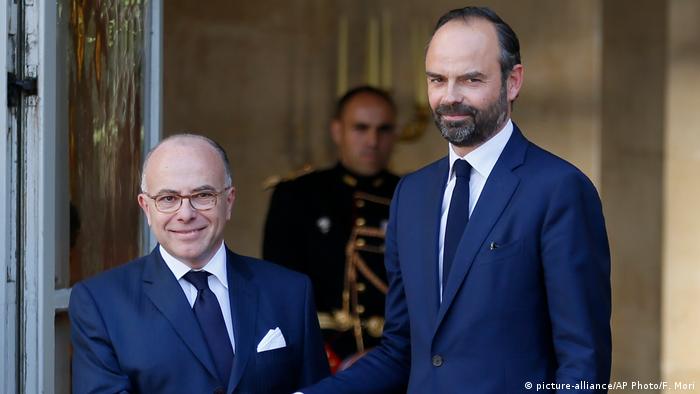 Freshly-elected French President Emmanuel Macron announced his pick for prime minister on Monday, his first day on the job.

'Man of the right'

Edouard Philippe (pictured above, right) has served as mayor of the northern port city of Le Havre since 2010, but is largely unknown to voters on the national level. The 46-year-old son of two teachers studied at the same universities as Macron and shares many of his political positions. He is known politically for his support of moderate French conservative ex-prime minister Alain Juppe. 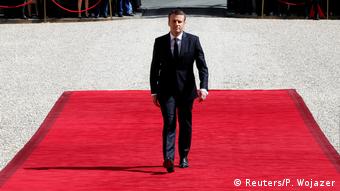 Having won the presidency, Macron's next challenge is to build support in parliament

Philippe's first engagement was a handover meeting at Matignon palace with his predecessor, Bernard Cazeneuve (pictured above, left), a Socialist, during which both men paid tribute to one another with warm remarks while acknowledging they were from different sides of the political spectrum.

"You said you were a man of the left, I do not doubt it, and myself, I am a man of the right," Philippe told Cazeneuve.

The move is a signal that Macron hopes to attract other young modernizers from the center of the political spectrum to his new centrist party, La Republique en Marche (Republic on the Move).

The 39-year-old President Macron is set to travel to Berlin later on Monday for his first official trip. The journey and the scheduled talks with Germany's Chancellor Angela Merkel are seen as the first move toward Macron's pledge on renewing the European Union.

Macron hopes to gain the support of mainstream lawmakers as he takes over from the socialist Francois Hollande.

The new president has promised to fight unemployment, boost security, and heal political divides after a contentious campaign that involved clashing with the right-wing firebrand Marine Le Pen.

Macron hopes to win a majority in the 577-seat assembly in the June legislative elections.

"I will not reverse course on any of the commitments taken in front of the French people," Macron said as he took office on Sunday.

Inside Europe: What's next for Macron?

Inside Europe: Macron and the EU