France′s Next President: Nicolas Sarkozy | Europe | News and current affairs from around the continent | DW | 07.05.2007 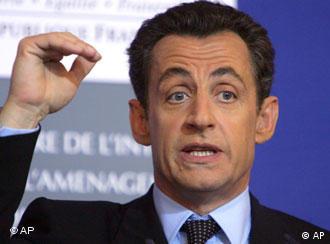 In the final round of polling on Sunday, May 6, conservative Nicolas Sarkozy claimed the French presidency with 53 percent of the vote.

His Socialist Party opponent, Segolene Royal, garnered 46 percent and had already trailed in the polls in the run-up to the election. She would have been France's first female president.

Click on the links below for more about the election, the issues facing France and what Sarkozy's win means for his country.

European newspapers hailed Nicolas Sarkozy's victory at the polls as a milestone in the history of the 5th French Republic. Editorialists noted a rightward shift -- some with satisfaction, others with suspicion. (07.05.2007)

In electing Nicolas Sarkozy on Sunday, the French voted for national reform. But DW's Anke Hagedorn says France's European partners may have little reason to cheer a nationalistically inclined leader in Paris. (07.05.2007)

Demonstrators in city suburbs across France threw rocks and bottles as conservative Nicolas Sarkozy won the country's presidential election. Police moved in with tear gas and made scores of arrests. (07.05.2007)

Conservative Nicolas Sarkozy won the French presidency against Socialist Segolene Royal on Sunday. Read DW-WORLD.DE's dossier in the run-up to one of the most exciting races in recent French history. (07.05.2007)