European Press Review: The Right Revolution in France? | Europe | News and current affairs from around the continent | DW | 07.05.2007

European newspapers hailed Nicolas Sarkozy's victory at the polls as a milestone in the history of the 5th French Republic. Editorialists noted a rightward shift -- some with satisfaction, others with suspicion. 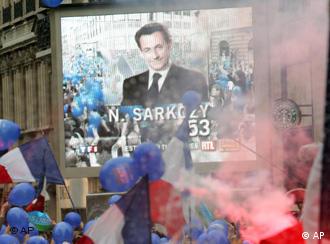 French editorialists across the board were full of praise for this year's electoral process in France, which saw unprecedented voter turnout during both rounds of presidential voting and a decisive victory for former Interior Minister Nicolas Sarkozy. But French papers were divided over the outcome of the vote.

In the French daily Le Figaro, Nicolas Beytout doted on the "brilliant election of Nicolas Sarkozy." The campaign "has been exceptionally active and controversial, with massive participation in the first and second rounds," and it "will certainly leave a permanent mark on the country's history," Beytout wrote. At the same time, he observed that the French Right won "a score against the Left that hasn't been reached since General de Gaulle." Noting that for the first time in three decades, French voters elected a candidate from the outgoing camp (outgoing President Jacques Chirac and Sarkozy both belong to the conservative UMP party), the editorialist opined that "gone are the days of systematic alternation, that frenzied back-and-forth that all too often has seen the country do and then undo that which it just created." As for Socialist candidate Ségolène Royal, Beytout wrote that she lost by a wide margin chiefly because "she was chosen by her own party based more on her personality than on the maturity of her project." France is ready for change, and the paper called Sarkozy's campaign "a victory for movement."

Meanwhile, the French daily Libération was not so excited about Sarkozy's victory. Despite a clear preference for the Socialist candidate, Laurent Joffrin wrote that "France made a clean choice." The editorialist said Sarkozy "is a legitimate president," and that the campaign was "dignified, passionate and civil to the highest degree." But Joffrin was concerned about Sarkozy's stated goal of "reconciling France with the dominant norm of conservative liberalism," and wondered whether Sarkozy is a "Thatcher sans petticoat?" The editorialist conceded that the "values of competition" demand the modernization of France, but that "the values of solidarity and justice remain" as a programmatic building block for the Socialist Party. "The cherry season will return," Joffrin concluded, but "for the time being, it's pit season. Take courage."

German newspapers were hopeful that Sarkozy would bring about badly needed changes in France, but also worried that he might embark on a unilateral crusade if his party wins the upcoming parliamentary elections, as well.

The online edition of the popular German magazine Der Spiegel observed that French voters elected what they perceived as "the candidate who has announced a new beginning, a change, even a 'break' with hardened traditions" following "the leaden times of twelve years of 'Chiraquie.'" But the editorialist, Stefan Simons, went on to question the integrity of Sarkozy's campaign promises: "Whoops, hold on a minute, and what about the last five years?" he asked. As former Interior Minister, "wasn't he (Sarkozy) -- number three in the government -- also responsible for the slow decline of the nation?" The "perfect feat" of Sarkozy's campaign, according to Simons, was that his team was able to "refashion Jacques Chirac's long-time minister as a 'newcomer,' an outsider, even something of an opposition leader." Simons was concerned over Sarkozy's courting the Far-Right vote, saying that he "has made the slogans of (far-right) Front National-leader Jean-Marie Le Pen acceptable in mainstream discourse." The parliamentary elections in June, so the editorialist, will prove whether Sarkozy is really interested in national unity, as he has said, or whether France will be ruled by "Sarkozy the Terminator."

Spanish observers were hopeful that Sarkozy's election would give new impetus to the European Union project, which faltered after French (and Dutch) voters rejected the draft EU-Constitution in a referendum.

Spanish daily El País mirrored the widespread opinion that Sarkozy's victory "reflects a desire for change, and comes at the hands of an authentic revolution in French politics." The commentator was suspicious of Sarkozy's propensity for populism, but also noted with satisfaction that he "has not passed through the grandes écoles from whence most of the French elites have come." Sarkozy's election also indicates that "French society has moved to the right," and that "Le Pen has contaminated all of French politics." The editorialist believed that "Europe has waited a long time on France, and they can wait a little longer until June, when this country, which is key to Europe, recovers much of its intellectual, social and economic vitality" following what the editorial opined will be another victory for the conservative camp at the parliamentary polls. "Sarkozy sympathizes with Spain," the daily paper wrote, and "as minister of the interior, he acted with total support and loyalty." That is why, in the view of the Spanish editorialist, "Spain and (Spanish President José Luis Rodríguez) Zapatero have a perfectly viable ally."

Finally, Italian journalist Massimo Nava, author of an essay on Nicolas Sarkozy, evaluated the French election campaign for Italian daily Corriere della Sera. Like most of his European counterparts, Nava was of the opinion "the new French revolution has begun." He wrote that "Sarkozy has disinhibited the right, freeing it from its complexes." Furthermore, "he has swung the National Front voters away from Le Pen and could become the Blair of the European right." Meanwhile, Ségolène Royal "has shrunk the Far-Left to a minimum and freed the Left from its archaisms and heavy machinery."

Demonstrators in city suburbs across France threw rocks and bottles as conservative Nicolas Sarkozy won the country's presidential election. Police moved in with tear gas and made scores of arrests. (07.05.2007)