France have been crowned World Cup champions after beating Croatia 4-2 in the final match in Moscow. It's the second time France has taken home the trophy, after winning its first World Cup in 1998.

What was the atmosphere of the final like? Barbara Mohr, DW sports, was there

An own goal from Croatian striker Mario Mandzukic and a penalty from Antoine Griezmann, the first ever awarded by a video assistant referee (VAR) in a World Cup final, canceled out Ivan Perisic's strike for Croatia to give France a 2-1 halftime lead.

In the second period, two sublime finishes from Paul Pogba and teenager Kylian Mbpappe sealed victory for Les Bleus ("The Blues") and head coach Didier Deschamps, who has become only the third man in history to win the World Cup both as a player and as a coach — joining Brazilian Mario Zagallo and German legend Franz Beckenbauer.

For France, it's a victory which crowns an exemplary campaign in Russia, but also represents the coming-of-age for a new generation of players who, with an average age of just 26.1 years, constituted the second-youngest squad at this World Cup. At home, it's a moment to savor for the country's new millennial generation for whom France's 1998 victory on home soil is already history. 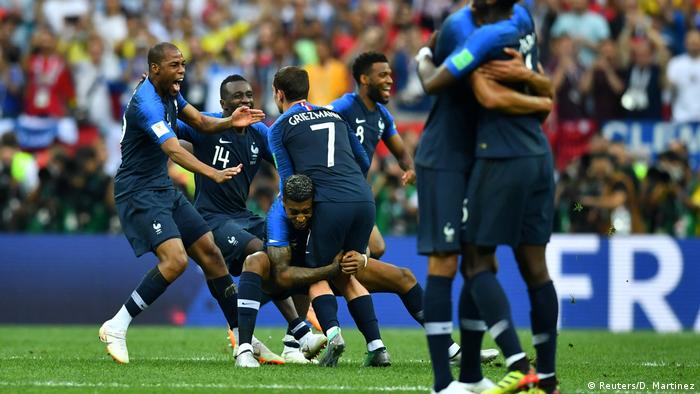 Croatia had played over 90 minutes more football than France en route to the final, but if those three periods of extra time and two penalty shootouts had taken a physical toll, it didn't show in the opening ten minutes in the Luzhniki Stadium.

Modric set the tone with a foul on Umtiti on the edge of the French box. Perisic replicated the Croatian press on the opposite flank, winning the ball off Stuttgart's Benjamin Pavard who, like his teammates in blue, was struggling to settle.

But if this World Cup has taught us anything, it's that protracted spells of possession or territorial dominance don't necessarily count for much. This is the set-piece World Cup.

Danijel Subasic should know that better than most after being beaten by England's Kieran Trippier four minutes into the semifinal in this stadium. He was beaten again here when the unfortunate Mandzukic inadvertently helped Antoine Griezmann's free kick into the back of the net for the 12th own goal of this tournament.

Croatia refused to be deterred by the setback, hitting back just 10 minutes later. A dead ball was again the catalyst. Vrsaljko nodded down Modric's floated cross, center back Domagoj Vida showed great awareness to prod the ball back to Perisic, who deftly moved the ball onto his left with his first touch before smashing home on the half-volley with his second.

Just as he was after equalizing against England in the semifinal, the Inter Milan man was the hero again. But how quickly fortunes can change in football — or rather how slowly, as VAR made its World Cup final bow. 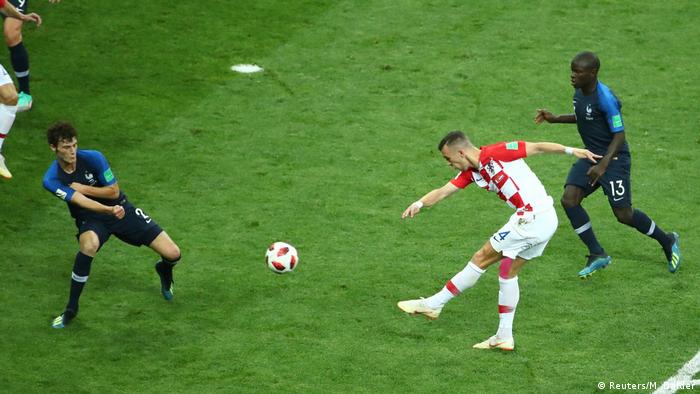 Over four minutes passed between the ball striking Perisic's arm in the box and the talisman Griezmann converting the resulting penalty to restore France's lead. Four long minutes in which the French players appealed for a penalty and Argentinian referee Nestor Pitana consulted VAR in his earpiece before checking — and checking again, and again — for himself in the pitch-side review area.

Proponents of the system will argue that the correct decision was reached, regardless of how long it took — although the extent to which the handball was deliberate or whether it constituted a clear and obvious error is debatable. Opponents will question how anyone can be one hundred percent sure of a decision which has taken four minutes and an apparent change of thought to make.

The whistles from the crowd inside the Luzhniki Stadium weren't as ferocious as those heard at most Bundesliga games last season, but they were audible nonetheless. Croatia certainly felt hard done by but they had ample time to recover because, incredibly, it was still only halftime.

If there was frustration in the Croatian dressing room at the break, head coach Zlatko Dalic, 51, found the right words to channel it. The Vatreni ("The Fighting Ones") started the second half as they had done the first, showing no sign of fatigue and immediately putting France under pressure. Eintracht Frankfurt's Ante Rebic forced Hugo Lloris into a spectacular save after being played in by the mercurial Ivan Rakitic.

It was a moment to remember for the Tottenham Hotspur goalkeeper, although he would later have a moment to forget. Luckily, by the time the 31-year-old French stopper inexplicably tried to dribble around Mandzukic inside his own six-yard box, allowing the former Bayern Munich striker to score Croatia's second, two of France's undisputed stars had fired Les Bleus into a 4-1 lead in a ferocious six-minute exhibition of attacking verve. 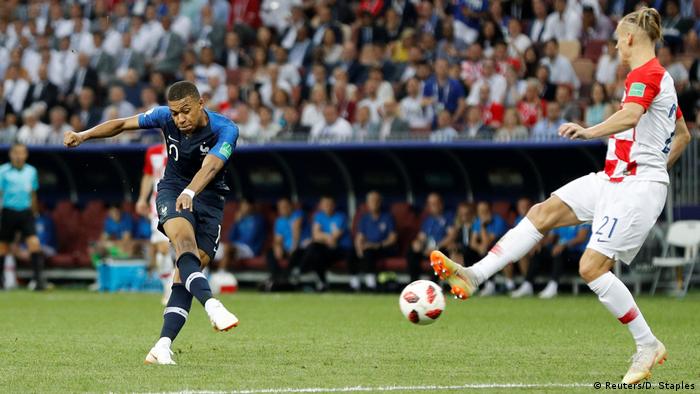 The warning signs were there as early as the 52nd minute when Mbappe ignited the afterburners to power beyond Vida and into the box, only to be thwarted by an alert Subasic. "Alerte rouge!" had been one headline in French sports daily L'Équipe in the buildup — and Les Bleus certainly had Croatia on "red alert" now.

Seven minutes after the chance, Mbappe was on the ball again, fed by a long, raking pass from Pogba. The 19-year-old's cross found Griezmann in the box who calmly laid it back to Pogba who had made up ground to reach the edge of the box. The Manchester United man's right-footed effort came straight back at him but his left-footed follow up flew past Subasic.

It took only another six minutes for Mbappe to wreak havoc again, firing past the hapless Subasic to make it four and give France a cushion to soften the blow dealt by Lloris' subsequent moment of madness as the clock ticked down to immortality.

For Deschamps, the 1998 World Cup winning captain who was given the rather unflattering nickname of "the water-carrier" by Eric Cantona, it will be champagne in Moscow tonight.

What was the atmosphere of the final like? Barbara Mohr, DW sports, was there

What was it like when the goals went in? Alima Hotakie, DW sports, from Paris

How disappointed are the Croatian fans? DW's Melanie Cura Dabell from Zagreb