Meat is off the menu at Lyon's schools, at least for now

Lyon is one of France's culinary hubs. It's known throughout the country for its bouchons, or traditional restaurants, serving high-end hearty fare. But now Mayor Gregory Doucet has decided that the city's schools should only serve meatless meals during lunch breaks — a sacrilege to many in this city.

Farmers from the Rhone region suspect that Doucet's political beliefs — he's a member of the Green Party — are behind the meat ban. The Greens, after all, have always been critical of conventional agriculture. 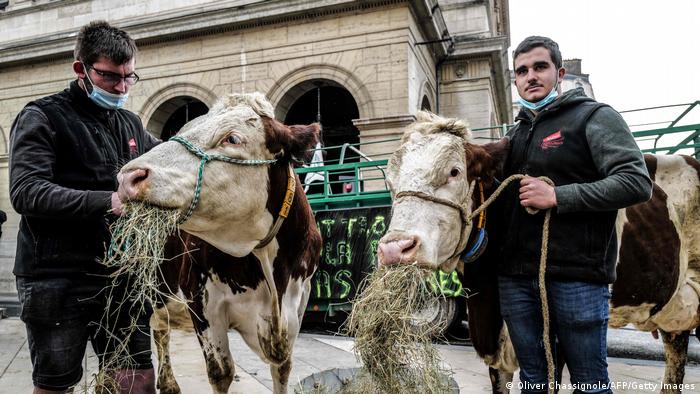 Doucet's decision was met with protests by local farmers

It wasn't long until representatives from two agricultural associations gathered outside Lyon's city hall to express their displeasure with the meat ban. They even brought along cows for extra effect.

The local dispute has now come to the attention of lawmakers in Paris. Interior Minister Gerald Darmanin of the governing Republic on the Move party decried the meat ban as the result of a "scandalous ideology," and fellow party members also sided with the minister.

Agriculture Minister Julien Denormandie declared the move a disgrace earlier this week, pointing out that it would disproportionately affect children from poorer families who may not be able to afford meat. He vented his anger on Twitter, stating: "Stop putting this ideology onto our children's plates! Just feed them what they need to grow. That includes meat."

Denormandie's comments drew pushback from his colleague Barbara Pompili, who heads France's Ecological Transition Ministry. She criticized the "prehistoric debate" over meatless lunches and debunked Denormandie's claim that the meat ban would exacerbate social inequality, referring to a study showing that children from poor families tend to consume more, not less, meat on average.

From a nutritional perspective, at least, Lyon's schoolchildren aren't being deprived of animal proteins. Eggs, fish and milk products remain on the menu.

But is a single set menu featuring a possible meal of fish, yogurt, veggies and a baguette really the right way forward? How should schools cater to vegetarian and vegan schoolchildren? And what about the lactose and gluten intolerant?

"Some children cannot eat certain kinds of fish for religious reasons," said Sabine von Oppeln, a political researcher at Berlin's Free University and an expert on all things French. She told DW that food "has been a hotly debated issue in France for a while."

Several years ago, Germany's Greens similarly advocated introducing a vegetarian day once per week in school cafeterias, primarily for environmental reasons. But Mayor Doucet has said he was not motivated by such considerations in Lyon.

His move is designed to speed up school lunch breaks during the pandemic. Doucet has said that going from a range of optional dishes to a fixed menu is the only way schoolchildren can eat lunch in an appropriate amount of time, especially now that kids must observe physical distancing rules. Fewer options in the lunch line means less time spent mingling with other students. 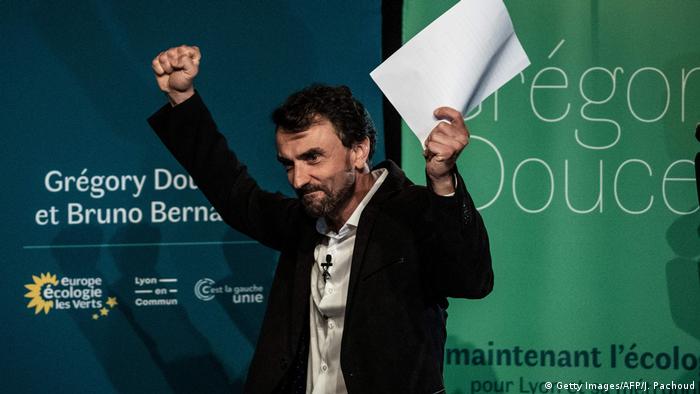 Many major cities like Lyon, Marseille, Bordeaux and Strasbourg are now governed by Green mayors like Doucet

The political backdrop to the heated debate may lie in the shaky electoral situation that President Emmanuel Macron's government finds itself in. Macron's party won none of last year's mayoral races in France's 40 biggest cities. Many major cities like Marseille, Bordeaux and Strasbourg are now governed by Green mayors. Others were won by the conservatives.

Macron responded with a Cabinet reshuffle. One week after the election debacle he appointed Pompili, a member of the Ecologist Green Party, to her new position, along with the conservative-leaning Darmanin and Denormandie. Just one month later, in August 2020, Denormandie and Pompili were already feuding over the approval of a pesticide. The government, in other words, was anything but united, even though Denormandie and Pompili have been at pains to downplaytheir differences.

The dispute, therefore, is less about what children should eat and more about ideological differences. "The row is really about French traditions versus recognizing particular cultural needs — especially those of Muslim individuals," said von Oppeln.

It's hardly surprising that Doucet — a self-declared flexitarian who only occasionally eats meat — had less qualms about removing meat from school cafeterias than other politicians. Incidentally, his right-wing predecessor Gerard Collomb introduced the exact same measure during the first coronavirus lockdown in spring 2020, without arousing much criticism at all. Then, as now, meat-free meals were only to be served for a limited period. The current measure is expected to be in place for at least seven weeks.

Demand for meat-free foods is up — 23% in the US last year alone, according to The Good Food Institute. But can plant-based alternatives replace classic burgers and sausages, and are they really better for the climate?

Plant-based meat alternatives will have to come up with new terminology in France. The country adopted a measure banning plant-based products from using the same names as food from dead animals.

The government has accused the mayor of Lyon of insulting French butchers and harming the health of children by keeping school lunch menus meat-free.