A spotlight is on the German meat industry following allegations of poor animal welfare and working conditions amid coronavirus outbreaks at meat plants. Food Minister Julia Klöckner has called for less "cheap meat." 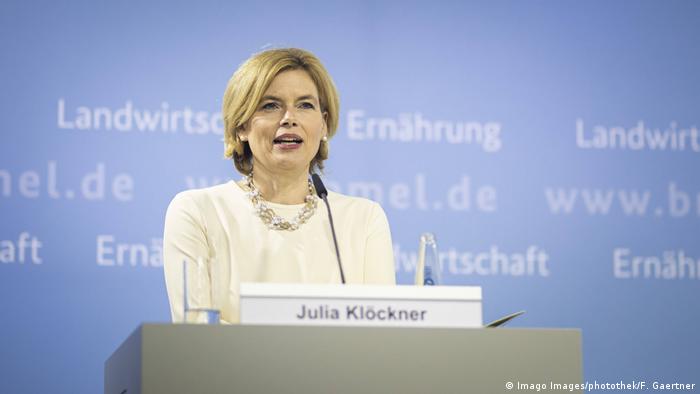 German Food and Agriculture Minister Julia Klöckner invited meat industry officials to discuss the future of livestock farming on Friday. The meeting comes after several coronavirus outbreaks at meat-processing plants in Germany have led to increased scrutiny on conditions for workers and animals in the industry.

At a press conference following the talks, Klöckner spoke of sometimes "emotional" discussions about the way meat is often sold at "dumping prices" in Germany.

Klöckner stressed that excessively low prices for meat did not reflect its true value and the fact that an animal had been reared and lived especially to produce it. Although meat should not become a luxury for the rich, she said, it must not be too cheap.

She once more stated that Germany was intending to introduce an animal welfare levy that would be added to the price of meat.

In addition, she said, representatives at the talks had agreed that authorities should look at the ethical background to cheap food in general and at unfair trade practices in the meat industry.

Another aspect discussed at the talks was the introduction of a quality seal to help consumers decide what meat products they are happy with buying.

Industry representatives from abattoirs, meat-processing plants, the farming sector, animal rights groups as well as veterinarians were invited to attend the talks in Dusseldorf, along with the agriculture ministers of the states of North Rhine-Westphalia (NRW) and Lower Saxony, where many of the affected plants are based.

Trade union: 'We've heard it all before'

While some have welcomed the talks, the German Federation of Trade Unions (DGB) dismissed the negotiations as a "show." They said the "last-minute" talks would not bring real change for the working conditions of thousands of workers.

"There have already been enough announcements and promises," the DGB's Anja Piel told the Neue Osnabrücker Zeitung. "We've heard it all before — but nothing ever happens."

The meat-processing industry has been harshly criticized for poor conditions for workers, many of whom are brought in from eastern Europe, described by activists as akin to "modern

slavery." Two districts of 60,000 people were recently put back into lockdown after more than 1,000 workers at a Tönnies meat-processing plant tested positive for COVID-19.

Countries across Asia are continuing to battle COVID-19, and DW's newsletter is here with trustworthy and accurate information on the pandemic's social and economic impact. Subscribe now, find out more, and stay healthy. (06.04.2020)

Two western German districts are spending their first full day back in lockdown following a fresh outbreak of COVID-19 at a meat-processing plant. Residents will return to measures first imposed in March. (24.06.2020)

In the Netherlands, government plans to slash nitrogen emissions 50% by the end of the decade have sparked backlash from angry farmers. Yet the country's intensive animal farming practices come at a high cost to the environment.