French Gender Equality Minister Marlene Schiappa has presented a bill to combat sexual violence and harassment. The legislation includes groundbreaking changes to laws regarding the age of consent and street harassment. 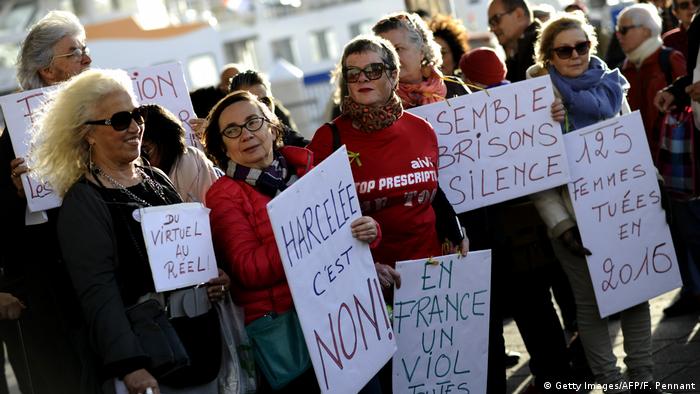 France presented a bill against sexual harassment and abuse on Wednesday, with measures including a law that states people under 15 years of age cannot consent to sex and fines for sexual street harassment.

The legislation, which still needs to be approved by the parliament, will also extend the age limit for reporting underage rape and redefine sexual and moral harassment to better cover online offenses.

President Emmanuel Macron has said the bill is meant to ensure "women are not afraid to be outside," following a flood of sexual assault allegations brought to light through the #MeToo movement.

The new legislation states that minors below the age of 15 cannot consent to sex with an adult. Schiappa said this measure would facilitate rape prosecutions.

Sexual acts with someone below the age of 15 are illegal under French law. However, as the law now stands, in order to charge an offender with rape, it must be proven that the sexual encounter was forced.

The introduction of the new bill was heavily influenced by two landmark cases that shocked France, involving adult men who allegedly had sex with 11-year-old girls.

Fines could be even higher for repeat offenders or in the event of aggravating circumstances.

"The idea is that it is high enough to be a deterrent but also that we could be sure the harasser can pay it immediately, so that the law can be efficient," the gender equality minister said in a Facebook Live session.

Schiappa has said street harassment included situations such as repeatedly asking a woman for her phone number when she has made it clear she is not interested.

Read more: How do you fight back against online harassment in Germany?

Underage rape victims will have until the age of 48 to file a rape complaint, an increase of 10 years from the current deadline of 38.

The push to extend the age deadline gained momentum after French television and radio presenter Flavie Flament accused controversial British photographer David Hamilton of raping her when she was 13 years old.

France's statute of limitations protected Hamilton from prosecution as Flament was 42 when she came forward. Hamilton died just weeks after the allegations came out at the age of 83, in a suspected suicide.

A new definition for sexual and moral harassment

The bill states that sexual and moral harassment offenses are defined "where such words or conduct are imposed on the same victim in a concerted manner," Le Monde reported.

This definition has been used in an attempt to crackdown on coordinated attacks conducted online, whose authors are currently able to avoid prosecution because they have not acted repeatedly.

"We want to put an end to this group cyber-harassment by making clear that every single person that is taking part will have to answer for it, even if they just sent a few tweets," Schiappa said on Tuesday.

Under the new laws, sexual harassment and moral harassment will be punishable by three and two years' jail time respectively, according to Le Monde.

"Apologists for rape"? Harvey Weinstein victim Asia Argento and women rights' activists in France and around the world have excoriated French star Catherine Deneuve and co-signatories of a letter criticizing #MeToo. (10.01.2018)

French star Catherine Deneuve and other artists wrote in an open letter published in daily Le Monde that the wave of "denunciations" in the wake of the #MeToo movement is a threat to sexual freedom and a "witch-hunt." (09.01.2018)