NGOs and activists demonstrated throughout France on Sunday to urge President Emmanuel Macron to do more to tackle climate change. They claimed a new bill aimed at slashing emissions does not go far enough. 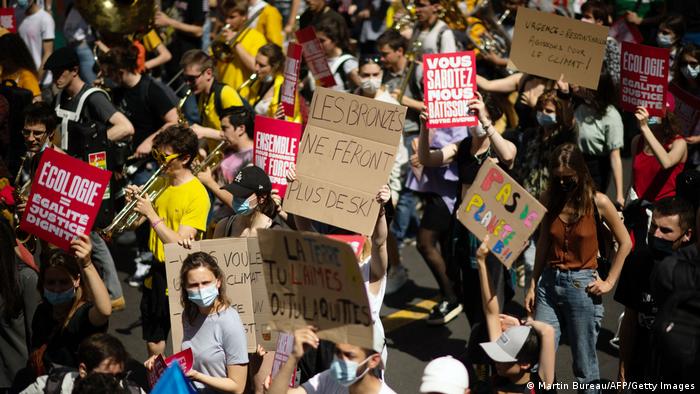 Tens of thousands of people took part in the marches

Thousands of climate protesters took to the streets of France on Sunday to call on President Emmanuel Macron to do more to tackle global warming.

The "Ensemble pour le climat" marches were held in Paris and in other major French cities to demonstrate a planned enviromental law that they say does not go far enough to limit a rise in temperatures.

Organizers said as many as 115,000 people took part in more than 160 events across the country; police said the figure was closer to 47,000.

In Paris, the demonstrators gathered behind a banner "climate law = failure of the five-year term” at the Place de la Republique.

One protester, Patricia Samoun, said that she was "obviously disappointed" by Macron's presidency.

What were Macron's climate plans?

The government's climate bill has already been approved by lawmakers in the National Assembly.

The plans will ban domestic flights under two and half hours that can be done by train.

There are also measures to support renovation of high energy-consuming buildings and to encourage greener cars.

President Macron promised a referendum during his 2017 election campaign on green reform, but the French weekly Le Journal du Dimanche reported on Sunday that this pledge had now been scrapped.

Under the French constitution, approving such a plebiscite would need backing from both houses of parliament.

But the upper-house Senate, where the conservative Les Republicains party holds a majority, has not been able to find a deal to support the idea of putting environmental reform to the public.

Speaking in Strasbourg, Macron downplayed suggestions that the plan had been ditched, saying it "won't be abandoned."

The initial bill itself was the result of a citizen climate assembly.

What else has France been doing on climate?

Macron was also behind a push to beef up the EU’s 2030 targets to reduce greenhouse gases by at least 55% compared with 1990 levels.

That is much higher than the previous 40% target.

Last month, the EU reached an agreement to become "climate neutral" by 2050.