Pastor Terry Jones, whose call to "burn the Koran" has led to fears of global repercussions, worked as missionary for decades in Germany. Here, too, he was known for his extreme convictions. 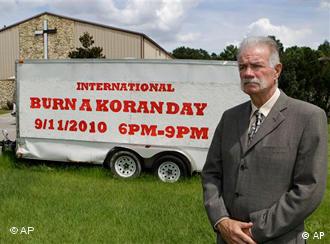 Jones insists on going through with his plan

A German church founded and formerly led by Terry Jones, the American pastor who international attracted attention with controversial plans to stage a Koran-burning ceremony, expressly denounced those plans on Wednesday. 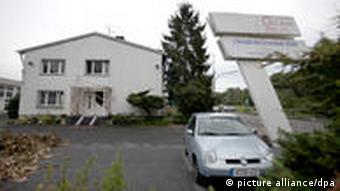 Jones' former church is 'deeply disturbed' by their former leader

Stephan Baar, deputy chairman of the Christliche Gemeinde Koeln (CGD), the Christian Community of Cologne, told Deutsche Welle that Jones preached a strict, even fundamental understanding of the Bible, but that no direct comparisons could be drawn between his sermons there and the radical views he is currently espousing at his new church.

"We want to make it clear that our church is opposed to what Terry Jones is advocating at the moment and that the CGD, even though he is the founder, has no more contact with him," Baar said.

The community asked him to leave in 2008. Baar insisted that there were no controversies surrounding his departure.

"He just left; we did not witness any of the deeply disturbing things we are seeing now. Pastor Terry Jones was placing too much emphasis on himself and distracting our members from their Christian faiths. He and our church simply went their separate ways."

Brigitte Baetz, a Cologne journalist who is a regular contributor on German public radio, said Jones espoused radical Christian views while at the helm of the CGD. 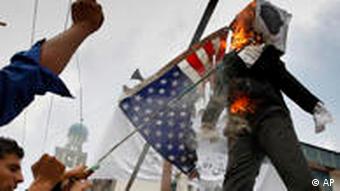 Protests against the actions have begun in Kabul

Baetz told Deutsche Welle that Jones commonly referred to the city of Cologne as a "Gate to Hell" and emphasized that Christians were "persecuted" there and took on the role of "innocent victims who would be rewarded for their suffering."

"In his sermons Terry Jones often convinced the members that they were made to suffer hardships because they were part of the CGD. He said again and again that the members were the victims of persecution and that it led to them losing their jobs and social status, for instance."

Baetz said that Jones' sermons bordered on fundamentalist interpretations of the Bible. She singled out his vehement opposition to Cologne plans to construct a mosque in the city as an example of his extremist views.

"Terry Jones saw religion as wrong and right. He told his followers here in Germany that Christians, and especially members of his CGD, were the only ones who were right. This is the basis, I believe, for what he is doing right now with his new church in Florida," Baetz said.

US unable to prevent controversial burning

Leading figures around the globe have expressed fears that Jones' planned "International Burn a Koran Day" could seriously strain relations between Muslims and the West. 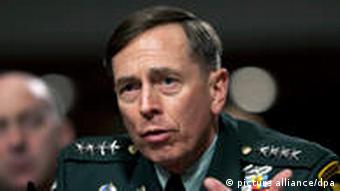 David Petraeus, the top US and NATO commander in Afghanistan, warned that "burning the holy book of Islam provides propaganda for insurgents and could endanger the [Alliance's] overall effort." Petraeus' comments were echoed later by NATO Secretary General Anders Fogh Rasmussen.

The United States government appears unable to prevent Jones' September 11 commemoration plans on Saturday. Although Florida fire authorities have turned down Jones' application to stage the open-air burning ceremony, police will not be allowed to intervene until the Korans have actually been lit.

An academic advisory council has said it is high time Germany set up centers for Islamic studies at universities to train Muslim scholars and teachers for the country's Muslim minority. (01.02.2010)