′Football needs to decide what its fans are worth′ | Sports | German football and major international sports news | DW | 27.02.2018

'Football needs to decide what its fans are worth'

More than 20,000 Borussia Dortmund supporters boycotted their team's Bundesliga game against Augsburg in protest at Monday night football. They feel left behind by the commercialization of the game. 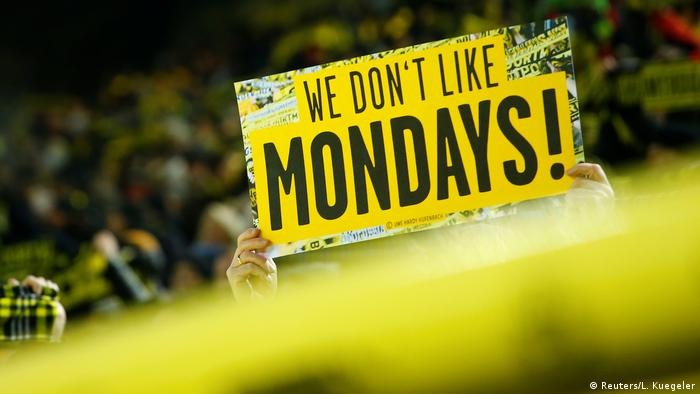 Something was different on the Dortmund underground. The trams to the Westfalenstadion, on matchdays usually packed with black-and-yellow clad football supporters, were strangely empty.

"So how many are boycotting?" asked one fan, on his way home rather than going to the match. "About 15,000, I heard," replied his friend. "Maybe more because of the cold."

Inside the stadium, the famous Yellow Wall, usually a sea of color in the buildup to kickoff, was a sad patchwork of gray punctuated by the relatively few fans who had braved the minus temperatures. The central block right behind the goal, the usual home of Dortmund's vocal ultras, was completely deserted.

The last time the "Südtribüne" was so empty for a league game was when it was forcibly closed by the German Football League (DFL) after crowd trouble. But on Monday night, this was a self-imposed exile.

"For fan-friendly kickoff times!" read a huge yellow banner stretching across the front of the terrace. "No to Monday games!" Another flag along the side of the pitch, presumably positioned for the benefit of the television cameras beaming the match to millions around the globe, demanded: "Whether first division or second: abolish Monday games!"

"We don't want Monday games to become established so that we end up with 30 per season," said Jan-Henrik Gruszecki, an active Borussia Dortmund supporter in an interview with Kicker magazine. "That's why we want to make it clear early on where we stand." 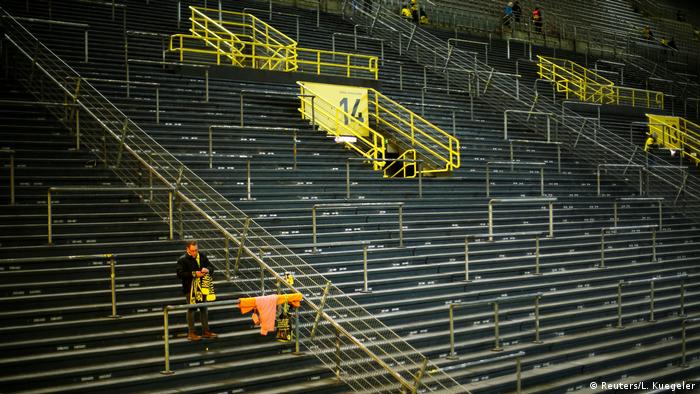 Thousands of Borussia Dortmund supporters stayed away from Monday's match

On a basic level, the supporters' concerns are purely practical. "People have to work on Tuesday and they have to get up early," said Joanna, a fan who had taken advantage of the unusual availability of tickets to attend her first game – perhaps a positive aspect of the boycott.

But the concerns also go much deeper. For many, the addition of Monday night games is just the latest in a string of developments which match-going supporters feel are threatening their fan culture.

"It's not just about Monday nights; lots of issues are coming together at the moment," explained Thilo Danielsmeyer, a social worker and researcher with the Dortmund Fan Project, responsible for organizing trips to away games as well as dealing with social issues concerning fans in Dortmund.

"We have the debate around investors and the 50+1 rule. We have the DFB (German Football Association) wanting to allow a Chinese national team to play in the regional league. There's a huge discussion about commercialization in German football at the moment." 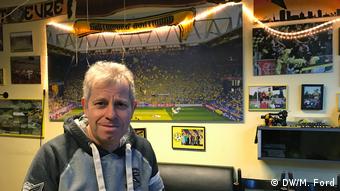 Danielsmeyer's comments echo those of supporters across the country who feel that those at the top of the game are more interested in television audiences and have failed to understand the wider importance of football in peoples' lives.

Indeed, for many Dortmund regulars, the game against Augsburg wasn't just a chance for BVB to restore their three-point lead over rivals Schalke. It's never just about points or the league position.

"Football is about more than just sport, especially here in the Ruhr region," Danielsmeyer continued. "Football is culture, football is tradition. It's what Dortmund stands for."

The approximately 10,000 fans who had taken their place on the towering south stand, which usually holds 25,000, initially did their best to get behind the players. But, without the hardcore ultras leading the singing, the chants quickly dissolved into Mexican Waves — usually a feature of meaningless friendlies — as a blunt BVB were forced to settle for a 1-1 draw.

Had the muted atmosphere affected the players at all? "We're pretty spoiled here in that we always play in front of sellout crowds," World Cup winner Mario Götze told DW. "But that's not a factor that influenced us."

Could he understand why so many fans had chosen to stay away? "Of course, I have a certain understanding for that, yes."

Will the league listen?

Whether the protests will bring about any significant change in the scheduling of Bundesliga matches remains to be seen; the current Bundesliga TV deal runs until 2021, so there will be no change before then. But there are signs the clubs are taking notice.

Last week, Eintracht Frankfurt bosses permitted their supporters to protest peacefully, instructing stewards to allow them to leave the terrace and surround the pitch, delaying kickoff by 10 minutes. And if the words of Dortmund stadium announcer Norbert Dickel are anything to go by, Borussia Dortmund are listening too.

"We respect the opinion of those who have chosen to stay at home tonight," Dickel told the 54,300 fans present in the 81,360-capacity stadium. "We are also against a further stretching out of Bundesliga matchdays and will be raising this when the next TV deal is discussed."

But actions speak louder than words, and supporters will only believe they have been taken seriously when they see the hard evidence. German football is at a vital crossroads and has existential questions to answer.

"Football needs to decide what its fans are worth," said Danielsmeyer at the Dortmund Fan Project. "How much? We'll see in the next few years."