The amount of food thrown away and buried in landfills around Europe and the United States is contributing to the global food crisis and adding a new dimension to the climate change debate. 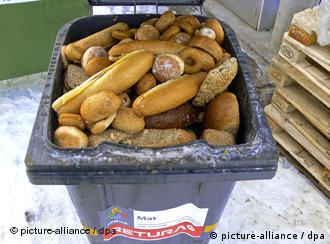 Around 40 percent of food produced in Europe is wasted

Christmas has become a traditional time for over indulgence in Western countries. The holiday season seems to provide everyone with an excuse to eat and drink to excess. Supermarkets burst with sweet treats and a mind-boggling selection of festive fare.

While most of it will be ingested, more than a third of food in Europe and the United States will grow moldy fur in the back of the fridge, pass its use-by date and land in garbage.

In the United Kingdom, one of Europe's worst food waste offenders, around 6.7 million tons of purchased and edible food, worth £10.2 billion (11.2 billion euros, $16.6 billion), are annually discarded. Around 4.1 million tons of this wasted food comes directly from food manufacturers. 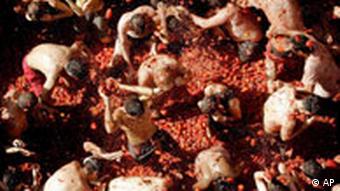 One third of the food produced in Europe is thrown away

"Only 30 to 40 percent of produced in Europe ends up at your table," Henrik Harjula, the principal administrator at the Organization for Economic Cooperation and Development (OECD) in Paris, told Deutsche Welle. "It is already disappearing when it is transported, when it is rotting and when it doesn't meet European standards. On top of this, in many countries in Europe, one third of the food that consumers buy is thrown away and 50 percent of that is thrown away without even being opened."

Add Europe's waste to that of the United States and the food waste problem becomes even larger. Around 40 percent of all food manufactured and put on sale in the United States is wasted, and studies show this trend is increasing. Food waste - including waste from farms, manufacturers, retailers and consumers - has risen 50 percent since 1974, reaching about 150 trillion calories per year in 2003.

A fascination with super and hypermarkets are partly to blame for the West's food waste, according to Harjula.

"People tend to go to these supermarkets once or twice a month but how can you accurately evaluate how much you a going to consume?" he asked. "They can't tell so they buy extra. Of course, this suggests that consumers are to blame too but there is this trend across Europe of 'buy one, get one free' so people are buying a lot of food that they don't need." 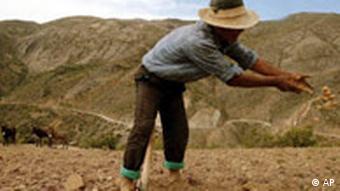 Farmers in the developing world can't compete in the market

The statistics relating to food waste sit uncomfortably with the continued reports of global food shortages and food price spikes. While there are other factors sharing the blame for a global food shortage, including the high cost of oil, a growing population, poor harvests and diverting grains to use for bio-fuels, food waste contributes to the problem.

"A lot of the food and agriculture in Europe and the West is subsidized and this is a huge problem for producers in the developing world," Harjula said. "Their products are not competitive on these markets and as a result they cannot sell their products, which leads to farmers losing income, losing their land and the poverty and hardship which comes from that."

In addition to its effect on food supply in the developing world, landfills full of food are also detrimental to the environment.

"Here in Europe we consume so much globalized food, like kiwis from New Zealand and pineapples from Australia – all of which has to be transported over thousands of kilometers to get here," Harjula said of food's environmental cost. 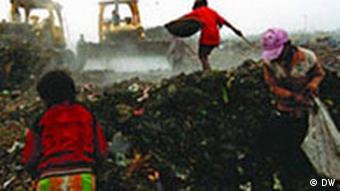 But it's the methane created by rotting food that is having the worst effect on the climate, he added. A greenhouse gas estimated to be 20 times worse for the atmosphere than carbon dioxide, methane is emitted from landfills as food rots.

"There are ways of collecting this gas from the decomposing food and using it for energy purposes but it is not a widespread practice at the moment," Harjula said. "What must be done in the meantime is to find away of taking the organic material out of landfill refuse."

Until there are more efficient means of harnessing methane, it's important to keep food out of landfills, according to Tom MacMillan, executive director of the British Food Ethics Council.

"Food waste is harmful and unfair, and it is essential to stop food going into landfill," he told Deutsche Welle. "Now is the moment all parties should be searching out ways to define prosperity that get away from runaway consumption. Until they succeed, chucking out less food won't make our lifestyles more sustainable." 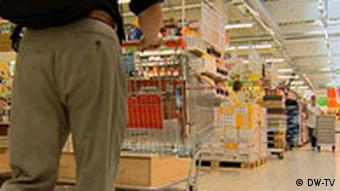 Consumers can help by planning their shopping better

European countries are already taking steps to reduce the production of methane from food waste deposited in landfill sites, Harjula said. The enforcement of the EU's landfill directive is expected to reduce the amount of organic material in landfill sites to 35 percent by 2016, but a number of European nations, including Germany, the Netherlands and Switzerland, have already reduced their levels to 5 percent and in some cases even less.

Consumers of course can also do their bit. By planning before shopping for food, consumers can reduce their food waste output at point-of-purchase and in their homes, while adhering to efficient food storage ideas can the amount of food which becomes inedible quickly and then thrown away.

Dumpster diving, once the pastime of squatters or the hard-up, has spawned a slew of nicknames; freeganism, skipping, containering. And it’s not just about necessity, it's about ideology. (11.11.2009)

Over one billion people to go hungry in 2009, says UN food agency