Dumpster diving stays on trend in Germany | Germany | News and in-depth reporting from Berlin and beyond | DW | 11.11.2009

Dumpster diving, once the pastime of squatters or the hard-up, has spawned a slew of nicknames; freeganism, skipping, containering. And it’s not just about necessity, it's about ideology. 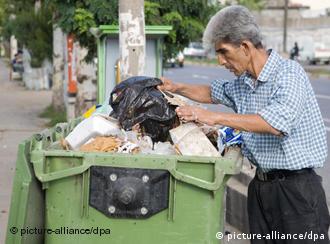 Dumpster divers are people who search for things that other people have thrown out that are still useful, can be eaten or recycled, and have value.

Dumpster divers will not only pick up discarded items left outside people's homes, but they will climb into dumpsters or bins at apartment buildings and behind shopping centers.

Mostly, the so-called divers go about their scavenging under cover of darkness. Some, though, operate openly.

Those who dumpster dive out of conviction consider it immoral in these times of economic crisis and widespread hunger that so much that still has value is thrown away.

According to the Worldwatch Institute in Washington, between 30 and 40 percent of edible goods are discarded by supermarkets. There are as yet, no official statistics for Germany.

One man's rubbish is another man's treasure

Rasol Eramouni and Joerg Bergstedt are two German dumpster divers. Armed with protective gloves and torches they set out for the night's scavenge.

Things to look out for: food where the sell-by date has only just expired, or food that is edible but where the packaging has been damaged.

Twenty-eight year-old Rasol is from Syria, a country, he says, where people hardly throw anything away. In this case Rasol, who is unemployed, has joined the dumpster diving tradition out of financial necessity and says it's a terrible waste, how much good stuff is being thrown away.

"Poor people could live from what is discarded. Saving in these hard times can't hurt. Why should I walk past fresh bread or a box of good eggs?" Hasan asks.

Hasan has a family to provide for; for others, like Bergstedt, skipping or freeganism is a political statement.

"In some ways, containering has become pretty cool"

"Young people put on their Che Guevara hoodies and go containering for a couple of years," Bergstedt said.

Bergstedt is one of the German spokespeople for containering. He has been doing it for fifteen years. And has managed to get by without spending a cent on basic living.

Aside from his political convictions, Bergstedt has an economic agenda. Consumerism is fuelled by supply and demand, he says. If people such as himself don't buy certain products, there will be no reason for the big supermarkets to keep ordering them.

In this way, Bergstedt says, he can remain true to his convictions. This, he says, is something that wouldn't be possible if he had to worry about getting to work every day.

The dumpster-diving movement started in the mid 1990s in the US. The Freegans used it as an expression against waste. With the movement's growing popularity, corporations have felt obliged to find a legal framework regulating how to deal with it.

In the US, for example, the foodstore chain 7-Eleven has left it up to individual stores to decide whether they allow skipping. In Germany it is mostly considered illegal.

"If people trespass," says lawyer Michael Biela-Baetje, "then they are acting illegally according to paragraph 123 of the German Basic Law. If the bin or skip is in a public space, then I assume that there is nothing illegal about it."

Opening a sealed bin to remove food is also illegal in Germany and, if caught, the dumpster diver could be charged with theft, says Biela-Baetje. This option is often used by supermarkets, which in many cases seal their bins or keep them in enclosed areas.

The larger German supermarkets, it seems, do not share the view that one man's rubbish is another man's treasure. Neither REWE nor the Tengelmann Group were prepared to comment.

Listen to a report on dumpster diving in Germany

African countries were already swamped by trash before the pandemic hit. Now COVID-19 related waste is making the situation worse.