German police have taken Porsche manager Jörg Kerner into custody, amid concerns that he could flee the country. The emissions scandal has spread from Volkswagen's core VW division to many other brands. 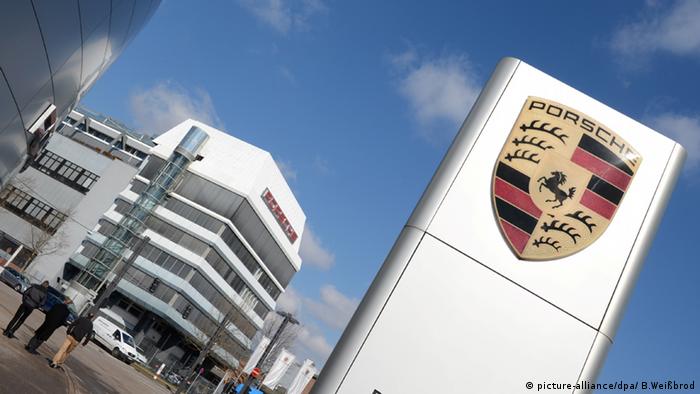 Jörg Kerner, head of Porsche's engine division, was arrested and was being held on remand amid concerns he may be a flight risk, German media reported on Friday.

Porsche chief Oliver Blume confirmed the detention of one of the luxury carmaker's staff in a letter to employees, seen by several news agencies. But Blume didn't name the staff member, who was arrested on Thursday.

The detention follows a series of raids at the company this week in connection with the alleged manipulation of emissions controls on diesel cars, which Porsche denies.

"We reject these allegations and will do our utmost to clear up the matter," Blume told staff in the memo.

Kerner is one of three Porsche employees being investigated on suspicion of fraud and criminal advertising. He was working at fellow German carmaker Audi when the diesel scandal broke in 2015. The other two suspects are a current member of the Porsche board of directors and a former employee.

Reports suggest Kerner was on his way to work on Thursday when he was informed that his home was being raided by police, German newspaper Bild reported. When he decided to return home, his sudden change in destination made investigators think he was attempting to flee, the newspaper added.

On Wednesday, some 200 officers from the police and public prosecutor's office searched locations belonging to Porsche and sister company Audi, securing mostly data. Further searches were carried out on Thursday.

Both high-end carmakers are owned by Volkswagen, which admitted in 2015 to using cheating software designed to dupe pollution tests in some 11 million cars worldwide, mainly in its own-brand VW cars but also in those made by Audi, Porsche, Skoda and Seat.

Last week, the Volkswagen group replaced its CEO — former Porsche boss Matthias Müller — in a new bid to turn the page on the "Dieselgate" scandal. He was succeeded by VW brand chief Herbert Diess.

Müller took the helm of the VW group in the turbulent days after the scandal broke. But he too became implicated while the firm dealt with a host of legal challenges at home and abroad that have already cost the auto giant over 25 billion euros ($31 billion) in fines, buybacks and compensation.

Stuttgart prosecutors said last year they were investigating Müller over market manipulation, suspecting he failed to share information about the diesel scandal quickly enough with shareholders.

Porsche at the Retro Classic

Porsche at the Retro Classic