There are new images of a strange, mud-dwelling mollusk previously only known to exist thanks to fossils. The freaky sea creature lives in an incredibly harsh environment, turning a noxious chemical into energy. 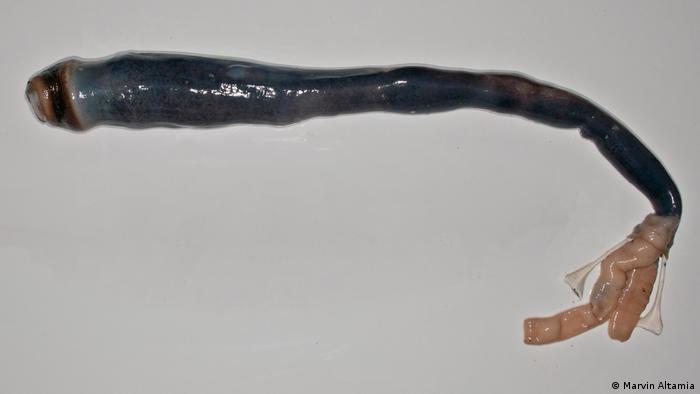 It might look like a creature straight out of the movie "Alien" - but the newly discovered giant shipworm, scientifically known as Kuphus polythamia, was found by a team of scientists in a marine bay on the island of Mindanao in the Philippines.

The enigmatic shipworm has been known to exist for up to 200 years thanks to fossil evidence, but no living specimen has been caught and examined - until now.

"Being present for the first encounter of an animal like this is the closest I will ever get to being a 19th century naturalist," said senior author Margo Haygood from the University of Utah College of Pharmacy.

The details of the findings were published in the Proceedings of the National Academy of Sciences (PNAS).

The exact location of the discovery remains a secret, however, so as not to attract shell collectors to the area.

Not actually a worm

Despite its name, the giant shipworm is actually part of the bivalve family, putting it in the same category as clams and mussels.

The creature can reach a sizeable 1.55 meters (5 feet) in length and 6 centimeters (2.3 inches) in diameter - making it the longest known living bivalve, or mollusk.

It spends the majority of its life inside a hard shell made of calcium carbonate, which it creates by secreting a special substance. It then submerges itself head-down in the mud, where it feeds on marine sediment.

The head is also protected by a hard cap, which can be re-absorbed if the animal needs to grow or burrow deeper into the mud. 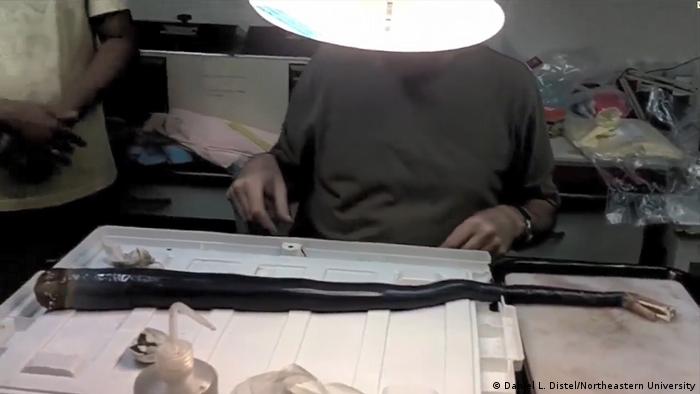 Found in the Phillipines: Kuphus polythalamia

If you thought the giant shipworm couldn't get any stranger, think again. The creature doesn't actually eat like a normal shipworm does - in fact, it hardly eats at all.

Other smaller types of shipworm usually feed directly off of rotting wood that has been washed into the ocean. By contrast, the giant shipworm uses bacteria in its gills to turn the hydrogen sulfide in the water into an energy source, essentially transforming carbon dioxide into nutrients.

This is similar to the process of photosynthesis used by plants. Due to lack of use, the creature's digestive system has shrunk considerably.

The giant shipworm has adapted to life in a harsh environment that would prove noxious for most life forms, taking advantage of the rich organic mud.

Scientists dove down to 800-meter-deep waters in the Coral Sea off northeastern Australia - and found astonishing species, some of which had never been observed before. Have a look at what is living in the depths. (22.01.2016)

Jellyfish have a bad rep. Most people are disgusted by or even afraid of them. But the squishy sea-dwellers are beautiful creatures - who don't even need a brain to gracefully float through the seas. (13.01.2017)