Earthworms help recuperate soil and enrich it with much needed minerals. But environmentalists are concerned as earthworms have come under threat from intensive use of manure and acidic soil.

Earthworms, it seems, are the unsung heroes of our world. Labeled slimy and disgusting by many, these lowly invertebrates work unseen and underground where they till, fertilize and improve soil.

But environmentalists are concerned that industrial agricultural practices are making life difficult for this surprisingly important animal.

Intensive use of manure and acidic soil with a pH value below five harm the worm, although it remains unclear whether herbicides affect earthworm's ability to reproduce.

Still, one thing is for sure: the destruction of its habitat every few months with heavy machinery stresses the animal.

Fewer than 30 earthworms are found per square meter on intensively farmed fields. But on organic farms, where the fields are rarely ploughed, up to 450 worms live in the same area, according to the World Wide Fund for Nature (WWF).

That's bad news according to agronomists and gardeners. A thriving earthworm population is an indication of healthy soil. And the retreat of the species is so evident the WWF has published an "Earthworm Manifesto" to publicize the faith of these dirt-dwellers.

"If earthworms suffer, so too does our soil and thereby the basis for agriculture and food supply," said Birgit Wilhelm, a WWF expert in the farming sector. For Wilhelm, these worms are the least appreciated creatures on the planet.

Earthworms are industrious and irreplaceable in that they tirelessly work to fertilize and aerate soil, and in the process help prevent soil erosion.

"Strictly speaking, there are 45 species and four categories [of worm] that carry out a range of tasks," explained Professor Heinz-Christian Fründ, an environmental scientist with expertise in soil at the University of Osnabrück. 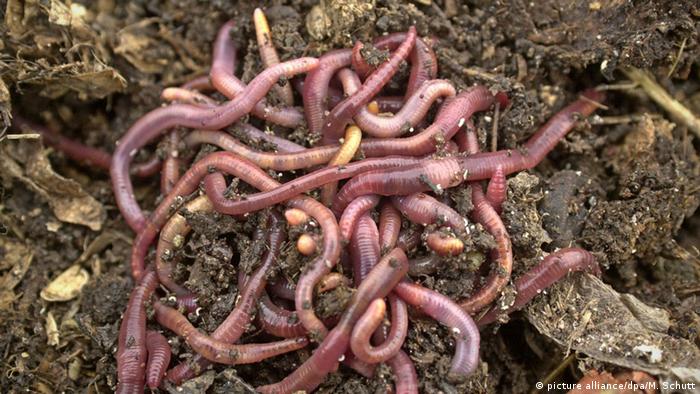 Some eat fallen leaves and wood on the soil's surface. Others gather en masse in compost heaps. A third category lives in mineral soil, which is derived from minerals or rocks and contains little humus or organic matter.

The worms replenish the soil with their excrement, which contains all the nutrients plants needs to thrive, including nitrogen, phosphorous, and calcium.

"The most well-known species of worm, the common earthworm, plays a major role for the farming sector," said Fründ. The animal builds a system of tunnels in which it lives. It digs a vertical main entrance from the top layers of the soil until it gets to a damp, reliable depth. In an enormous show of strength, the worm burrows through the earth, aerating it, so oxygen and plant roots can reach further down. This act contributes to soil formation and regeneration and improves its ability to absorb water.

The common earthworm feasts on rotting, bacteria-rich plant matter that it finds on the soil's surface. "Therefore, it's essential that farmers don't harvest right down to soil level, but instead leave some remnants," Fründ said.

Droughts are particularly devastating for worm populations. If there are too few worms, the soil will become dense, poorly aerated and won't absorb enough water.

"Soil that contains many earthworms will absorb up to 150 liters of water per hour and square meter," said WWF's Wilhelm. "If the soil has too few worms, it will act like a blocked drain. Very little will get through. That can lead to floods." 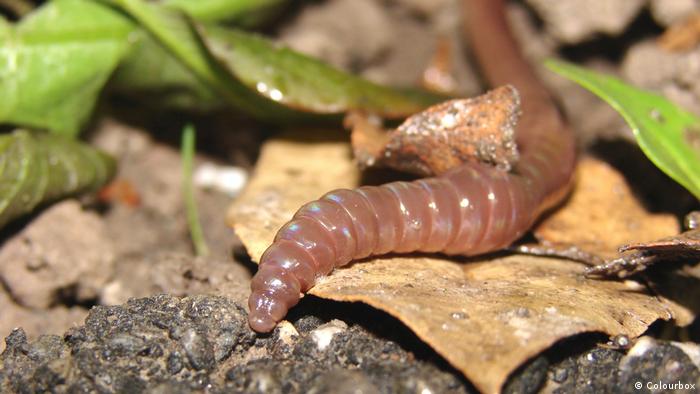 Heavy metals, such as copper, are one of the factors that can reduce earthworm numbers. However, copper compounds are used mainly by organic farmers - particularly in vineyards. Wine producers have been using the substance as a fungicide for about 100 years, although the European Union has designated it a "candidate for substitution," compelling member states to seek more favorable alternatives.

"Large amounts of copper can negatively impact an earthworm's enzymes. It inhibits their growth or they can no longer reproduce properly," according to Bernd Hommel, an expert in analysis and organic chemistry at the Julius-Kühn-Institute, a federal research center for cultivated plants. Although the researcher also established that some earthworm species can excrete the absorbed metal.

Even the agricultural sector has long known that earthworms need to be protected, says Hommel. "Only synthetic pesticides that have been tested in the lab and out in the field for compatibility with earthworms are coming to market," he added.

Still, the WWF warns of a "dangerous chain reaction for humanity," and has called for politics and society to encourage an agricultural sector more focused on soil and humus-friendly farming. The goal of the EU's farming policy should be the promotion and maintenance of natural soil fertility, said WWF's Wilhelm.

At a time when development is swallowing up more and more countryside, good soil is becoming increasingly important to ensure a secure food supply for the world's growing population. Long-term soil fertility and the ability of farmland to recuperate are under threat and protecting earthworms with their ability to improve soil should be an agricultural goal.

Research has shown there are solutions. "Using a soil cover with a catch crop such as grass during winter led to a sharp rise in earthworms," Fründ said. It's a glimmer of hope for these underground dwellers.

The power of worms

A Zimbabwe organization is at the forefront of earthworm technology. It’s producing nourishing organic compost that ensures great farm produce - and offers solutions for waste disposal. (16.09.2016)

The lowly earthworm is a jack of all trades. It fertilizes, stabilizes and aerates soil - out of sight and out of mind. Some may find them icky, but they're a vital part of our ecosystem. (27.01.2017)