Fire and ice: The untapped fossil fuel that could save or ruin our climate | Environment | All topics from climate change to conservation | DW | 31.05.2018

Fire and ice: The untapped fossil fuel that could save or ruin our climate

Methane hydrate buried below permafrost and the ocean floor could meet the world’s energy needs for 100 years – but would extracting it be catastrophic for the climate? 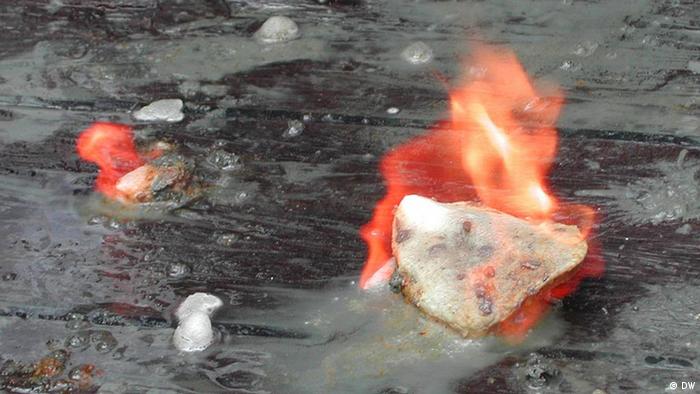 When we think of the planet's diminishing fossil fuel reserves, we might picture oilfields, coal gouged from open-pit mines, or the controversial business of fracking to extract shale gas that was once beyond our technical reach.

But what if earth's biggest store of fossil fuels was in fact a little-known, and even less accessible, untapped source of natural gas?

Beneath the sea floor, methane is trapped in ice crystals under high pressure and extremely low temperatures. The resulting substance is sometimes called "fire and ice."

"You will find YouTube videos of this," Steve Holbrook, professor of geosciences at Virginia Polytechnic Institute told DW.

"You hold a lighter or a match to it, and it will ignite. For a few minutes you can actually have burning ice. The match is igniting the methane gas that's been released. At the end of that you've just got a puddle of water left."

The scientific name for this energy source is methane hydrate.

Another 100 years of hydrocarbons?

It's found in two places on earth – under the ocean floor, and beneath Arctic permafrost. Deposits can be hundreds of meters deep and scientists say it could be more prevalent than any other fossil fuel.

"Methane hydrate has the potential to extend the fossil fuel age by a century or more," Richard Charter, a senior fellow with The Ocean Foundation told DW. "There may be more methane hydrate out there than all of the remaining oil and gas."

Methane is a natural gas that contains carbon. Burning it releases less CO2 into the atmosphere than coal or oil, but emissions still contribute to climate change.

Worse, methane itself is a greenhouse gas that's about 30 times more potent than carbon dioxide. If it's not extracted carefully, leaks pose a real risk to the climate.

"That would accelerate warming of the seas and melting of permafrost, which could, in turn, cause the release of even more methane," Charter said. "We could end up frying the planet."

Charter has been studying methane hydrate for more than 50 years and says there is still much to learn about how it behaves under different conditions. 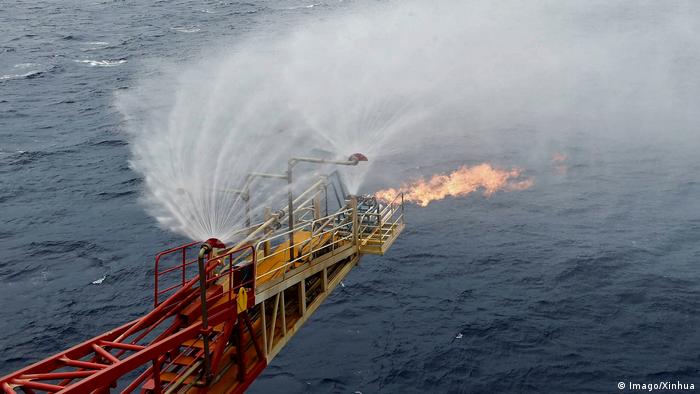 We do know that when methane is freed from its icy confines it expands rapidly, creating a risk of explosion. In fact, some scientists think methane hydrate, which is plentiful in the Gulf of Mexico, was to blame for the blast there that led to the BP oil spill in 2010.

The fossil fuel that captures carbon?

But accessing this volatile hydrocarbon might not be all bad news for the climate.

Charter has long been fascinated by methane hydrate's ability to hold carbon in place. If scientists found a way to replace the methane in hydrate deposits with excess carbon dioxide, it might be possible to remove greenhouse gases from the atmosphere while extracting methane for fuel.

A team of scientists from the United States and Japan made a breakthrough in 2012. They drilled into a methane hydrate deposit on the North Slope of Alaska, and injected a mix of carbon dioxide and nitrogen into the well.

Scientists say much more research is needed before commercial drilling for methane hydrate is possible. To this end, the US Department of Energy recently launched a six-year, $80 million (€65 million) project to drill core samples of methane hydrate from the Gulf of Mexico.

"It's a delicate task that requires transporting samples from great depths to the surface without depressurizing them," Peter Flemings, a geoscientist at the University of Texas and the project's principal investigator, told DW. 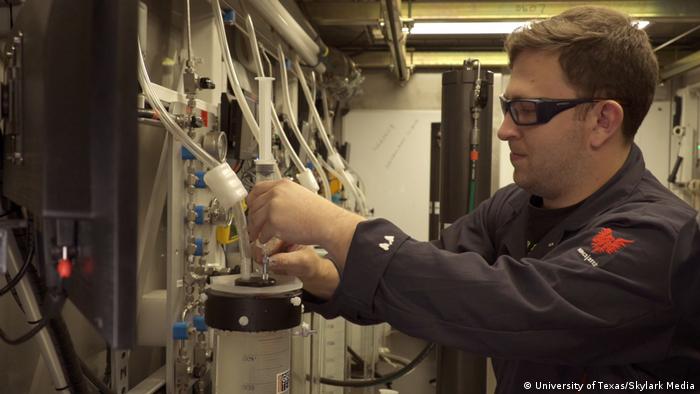 A researcher tests methane hydrate samples. The volatile hydrocarbon must be handled with great care

The cost and technical challenges of mining methane hydrate mean it's a long way from being commercially viable, particularly in North America where gas and oil are relatively cheap.

Race for the new fracking

But Flemings says that could change as the science improves. "This could be analogous to shale 30 years ago," he said. "None of us thought we were going to produce oil and gas out of shale back then."

India and China are also looking into exploiting under-sea reserves, while Russia and Canada focus on extracting it from beneath permafrost.

"Russia and Canada have done a lot because they have vast arctic territories where methane hydrate is known to exist in permafrost," Holbrook said. "They have done cutting-edge work both in understanding the reservoir and in experimenting with ways to try to produce it."

Countries with few energy resources may be the first to find extracting methane hydrate financially attractive. Since the nuclear disaster at Fukushima, Japan for example, has been forced to import large quantities of expensive liquefied natural gas.

"Japan is frantically trying to develop an industry because they have hydrates off their coast," Charter said. But he believes it will be another decade before it's clear whether methane hydrate extraction is a viable proposition, even for Japan.

Until then, fire and ice's potential to slow or hasten climate change remains an unknown quantity in our energy future.