Three German children along with their German "IS" mother must be brought back from a Syrian refugee camp, a Berlin court has told the Foreign Ministry. The judiciary cited state obligation to protect citizens abroad. 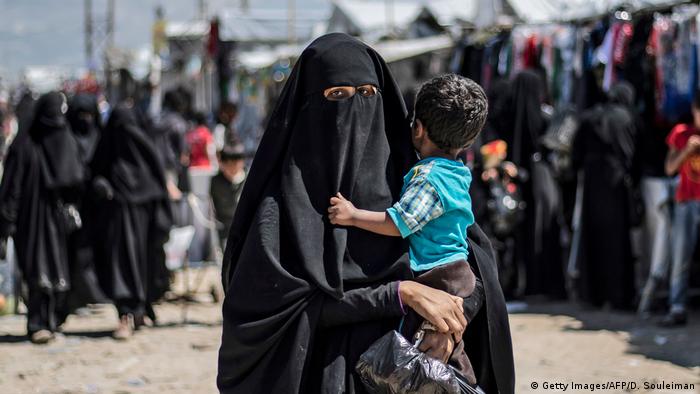 Germany's Foreign Ministry said late Thursday it was "examining" the Berlin Administrative Court's ruling that three children and their mother, originally from Germany's northern state of Lower Saxony, be located and returned to Germany from a Syrian refugee camp.

German media said the case marked the first time a German court has decided that consular protection for citizens anchored in Germany's Basic Law also extended to German families whose members left the country to support the "Islamic State" (IS) terror group.

A Berlin court spokeswoman said the fast-track ruling — made public Thursday — is still subject to appeal, and specified that intended returnees be formally identified.

A media consortium comprising two public broadcasters, NDR and WDR, and the newspaper Süddeutsche Zeitung, had earlier reported that the Foreign Ministry did not see itself obliged to bring the mother to Germany from al-Hol, a remote desert camp just inside Syria's border with Iraq.

Germany: Returning from the Field of Terror

The Berlin court ruled that the three children, reportedly aged 2, 7 and 8, were entitled to German consular protection from the "dangerous" conditions in the camp, which the International Red Cross recently described as "horrifying."

Among the thousands of camp inhabitants, according to the news consortium, were dozens of male German IS militants, their wives and hundreds of children of German nationality.

Hanover-based lawyer Dirk Schoenian, representing relatives seeking the children's return, said the ruling showed that the Foreign Ministry could not withhold consular protection when it disagreed with the affected person's mindset.

"This is a fundamental decision in which the Federal Foreign Ministry was clearly shown that one cannot avoid political responsibility and legal responsibility," Schoenian told the German ARD public broadcasting group, of which NDR and WDR are members.

Counseling head Claudia Dantschke, whose center Hayat Deutschland looks after families seeking returns, said: "Now we finally have a ruling from a German court that the Federal Republic of Germany is obliged not only to take back the children but also their mothers@.

No taking children without mothers

ARD reported that "isolated returns" of children — alone without their mothers — had been ruled out by Kurdish authorities.

In May, there were 76,000 people living at al-Hol after Kurdish-led forces overran the last sizeable remnant of theIS' nearly five-year-long caliphate in March. Three months earlier there had only been 10,000 people there, the International Red Cross said.

A separate section of al-Hol had 12,000 foreign women and children of IS fighters, the AFP news agency reported in early June.

Other countries, such as France and Britain, have refused to repatriate their nationals. In early June, Norway reportedly fetched five children whose father had died and whose mother was missing,

German media reported in late May that the Foreign Ministry had signaled its readiness to retrieve two orphaned German children, aged 2 and 4, from al-Hol.

Their mother, an IS affiliate killed during the militant group's defeat at Baghouz, originated from the southwestern German state of Baden-Württemberg.

US representatives had requested Germany increase their military presence in Syria as the US plans to move its own troops out of Syria in the near future. Germany has said it is already making "significant" contribution. (08.07.2019)