Berlin ready to fetch 'IS' German children after court case 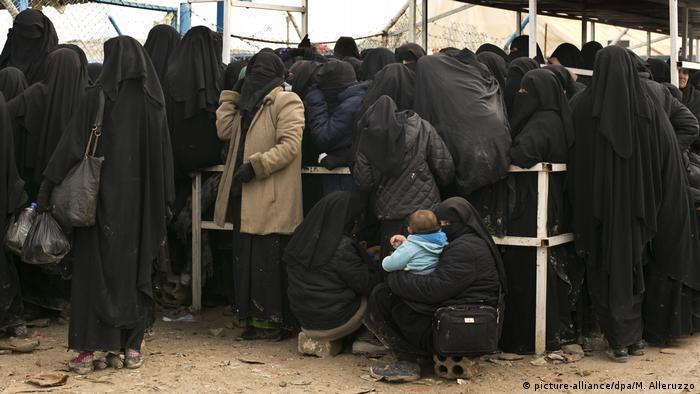 Germany's Foreign Ministry, reacting to a legal bid by two girls' grandparents before a Berlin administrative court, declared its readiness to find the orphans of Germans who supported Islamic State and bring the children to Germany, a media consortium reported Friday.

The public broadcasters WDR and NDR and newspaper Süddeutsche Zeitung said it was the first time the German government had shown a readiness to fetch such children from Syria under German family law that declares children to be "especially worthy of protection."

Hanover-based lawyer Dirk Schoenian told the media consortium that the girls had acute health problems and might possibly die "in two or three months."

It was "good that the Foreign Ministry now recognized its responsibility," he said.

So far, more than 40 nations have shown reluctance to take back citizens deemed IS-supporters or members and seen as likely radicalized or traumatized, given public anxieties after terrorist attacks in recent years.

In March, Kurdish-led Syrian Democratic Forces (SDF) overran Baghouz, the last sizeable remnant of the IS' nearly five-year-long "caliphate," prompting survivors to swell the number of people at make-shift camps under Kurdish control and run by aid groups along the Syrian-Iraqi border.

The two girls involved in Berlin case were at al-Hol, a tent camp of 76,000 internees, Germany's ARD public broadcasting network reported on May 14, attaching pixelated photographs to obscure their faces. Dozens of German "IS" children were in the camp, ARD reported.

The girls' mother, from the southern German state of Baden-Württemberg, was reportedly killed during the IS defeat at Baghouz.

Citing the International Red Cross, ARD's Tagesschau said conditions at al-Hol were "horrifying" and likely to lead to the radicalization of people living there. Diehard IS "moral-police" had even set fire to the tents of presumed defectors.

At least 25,000 of al-Hol's inhabitants were school-aged children, reported the French news agency AFP in March, citing Red Cross President Peter Maurer as saying "needs are huge and the camp is overwhelmed."

The Associated Press reported in April that 11,000 people were being held in al-Hol's foreign section, including internees from South Africa, Germany, Canada, Turkey, Russia, Tunisia, and Trinidad and Tobago.

The precept of protecting children's wellbeing (Kindeswohl) — implying that the state should intervene if parents neglect their childcare prerogative — is anchored in German family law and the EU's Charter on Fundamental Rights.

In early May, French grandparents of two children — a boy aged 4 and a girl aged 3 — stranded with their French jihadi mother in Kurdish-held Syria took their case to the European Court of Human Rights (ECHR) in Strasbourg.

That suit also accused France of violating the right of entry for child citizens — the first time that this argument had been pressed in the case of jihadis' children, said lawyers Marie Dose and Henri Leclerc.

Distressed children should "not have to pay for their parents' choices," they said.

In April, France's State Council rejected several similar requests, saying it was a French diplomatic matter outside the council's jurisdiction.

The Forgotten Children - Europe's Failure in the Refugee Crisis