It doesn't feel that way now, but Germans weren't enthusiastic about football in the 19th century. Christoph Marx, a World Cup historian, explains how special terms for soccer were developed to change that.

With the FIFA Women's World Cup kicking off on June 7, get to know how Germany developed its own terms for the sport: Historian Christoph Marx is the author of a book on the German jargon involved in the realm of soccer.

DW: Mr. Marx, you are an expert on the language of soccer. In Germany, people use the words "Torhüter"  and "Ecke," but in Switzerland and Austria, they use the actual English words "goalie" and "corner." Why is that?

Christoph Marx: German teacher Konrad Koch of Braunschweig introduced the game of soccer to Germany in the 19th century, but he made it his passion to create a language for the game in German. After all, at the end of that century, soccer was still considered an English sport in the German Empire. In other words, the enemy's game. Koch made it his task to "Germanize" the linguistic expressions for the game.

So "Torhüter" is used in Germany, and not "goalkeeper," as it is in other German-speaking countries. "Linesman" became "Linienrichter" and "offside" became "Abseits." These are all standard expressions in Germany, but it never came to this purist approach in Switzerland and Austria.

How did the German expressions establish themselves here?

In a typically German way, Konrad Koch wrote up a pamphlet in 1903, a long essay, which all the German soccer clubs had to approve. It was a "rule book" on the German expressions and that's how they came to be used on the soccer fields.

Things were noted down to the smallest detail, like not saying "passen" (pass), but "abgeben" (give up) the ball. A player was therefore not allowed to say "pass the ball to me," but "give it up to me."

That may sound crazy nowadays. But back then, it was a very serious business. You have to realize that there was a great deal of opposition to this game. So it was important to demonstrate that it was not only an English game. At the time, people called soccer an "English illness." It seemed "un-German," while gymnastics were "very German" at the time.

Read more: Get to know the concept of the German Verein

Gymnastics had become popular through "gymnastics guru" Friedrich Ludwig Jahn in the middle of the 19th century. Why did sports enthusiasts not welcome soccer with open arms?

People weren't familiar with soccer yet. It started out as a kind of rugby game in the middle of the 19th century in England, at colleges, and it was considered an elitist game. It was a slow process that allowed it to become popular in Germany in the late 19th century.

There is evidence of the very first soccer game in Germany in Braunschweig in 1874. That is pretty late. And it was still considered obscure, and even into the 20th century it was not always considered a legitimate sport. There was also an educational aspect to it in the beginning — that it was part of one's upbringing and fitness training for military service. 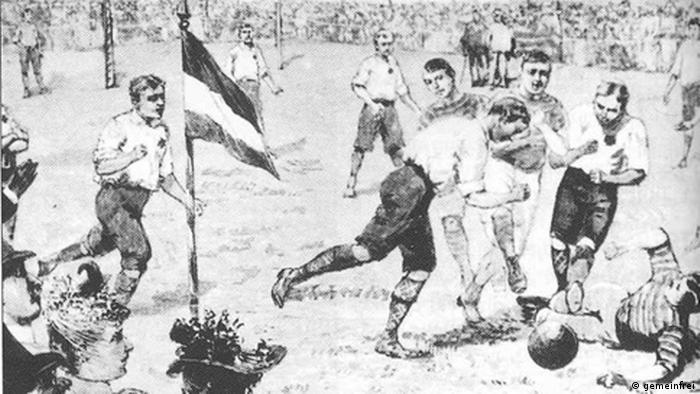 Speaking of military service: There are a lot of military terms in the German expressions for soccer, like "Tore schiessen" (shooting goals) and "Zweikampf" (in soccer: tackle, but can also mean duel). Why is that?

The language is metaphorical because there is a resemblance in the aim of the game. Football is also about beating the opponent, to conquer and outwit them. Soccer emerged in a period when war was still relatively common. A "battle of attrition" is also a military term. In soccer, the same effect is desired: wearing down the opponent.

German football jargon comes from all sorts of areas: Sometimes it's from the animal world, such as the "Schwalbe" (literal translation: swallow, i.e. the bird; the English term for this type of foul is "diving"), or inspired by the shape of a fruit, as in the "Bananenflanke" (literally, a banana kick; refers to a curl or bend)...

Yes, the swallow… it's a rather elegant bird, and yet it stands for something rather rough in soccer. The "swallow" (the dive) is supposed to represent the movement when one feigns that a foul has been committed.

Because it's known as "diving" in English, the British press called former national coach for Germany, Jürgen Klinsmann, "the diver."

Yes, exactly. There was an ironic element to all of that, and which was appealing to the British. And he would always make an ironic reference to it after scoring goals when he played himself — by sliding across the field. That really developed from the cultural context at the time. And it just established itself, without anyone being able to say who actually invented it. After that, everyone was using the expression. 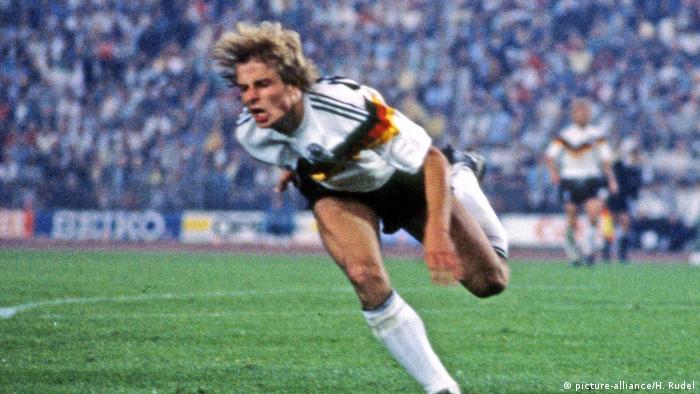 What role do journalists and the public play in establishing terms?

Journalists have of course played a huge role in creating new terms, as well as social media. For instance, the term "Abstiegsgespenst" (specter of relegation). Such terms which journalists have coined end up sticking, and are used by everyone because they are very apt and clever.

You explained earlier that initially, German soccer jargon aimed to clearly distinguish itself from English. Are things reversing now, with terms such as "one touch soccer" or "derby" for instance being used in German?

Yes, that is the case. "Derby" is an English word, of course. It also stems from the fact that everything has become more international. It used to be that it was primarily German coaches in the Bundesliga, and they spoke German. But now there are coaches from other countries who are not fluent in German, but they still try to speak the language to integrate themselves more. And then strange new terms develop in this "globalization speak."

For instance, the phrase that former Bayern coach Giovanni Trappatoni once said: "ich habe fertig" [correct German uses the verb "sein" (am) and not "habe" (have) to express "I have finished"], which has become part of everyday language. 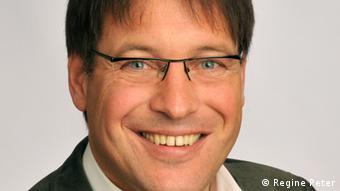 Exactly. That can almost be put in the Duden dictionary: Everyone knows what it means, even though it is grammatically incorrect. Just like with "no-look pass." That's a mixture of English and German which has developed from players who speak different languages.

What is your favorite term in soccer jargon?

One of my absolute favorites in the famous "soccer god" because it expresses a bit of wisdom: the part that remains incalculable, capricious, irrational, emotional, despite all of the scientification surrounding the sport. That term expresses all that in a very ironic way and yet is very apt.

New expressions keep being invented: Since Germany's surreal winning match over Brazil in 2014,7-1 has become a familiar phrase…

Yes, that's great. You only have to say "seven to one" and it's an immediate symbol for complete catastrophe. But there will not be another 7-1 again; I would bet on that. Who would have ever thought there would have been a 7-1 at all? But that's soccer. And it's now the phrase of all phrases.

Christoph Marx is the author of the book Der springende Punkt ist der Ball. Die wundersame Sprache des Fußballs (The springing point is the ball: The wonderful language of football), 2018.

The German obsession with clubs

From Carnival to football and even odder hobbies like rabbit-breeding, there's a club for everyone in Germany. Nearly half of Germans belong to one - and the numbers continue too grow. (06.09.2017)