An eventful match at the Volksparkstadion resulted in HSV being finally relegated. However, it was an afternoon to be proud of for most of Hamburg’s support, proving the magnitude of the club will pull them through. 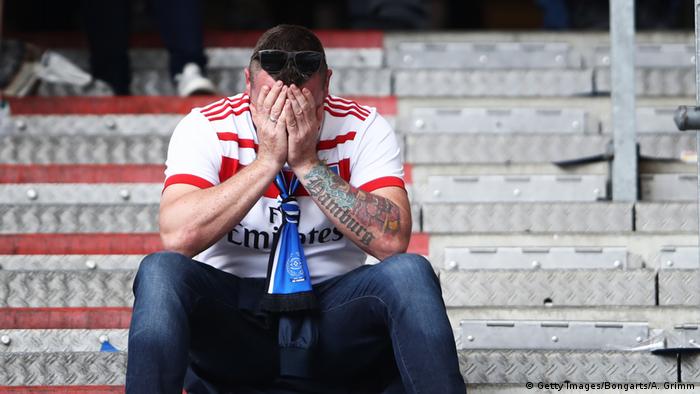 It was a surreal day in Hamburg. Despite the fact that HSV went into matchday 34 needing a miracle to keep their record as the only side ever to stay in the Bundesliga in its current form, the streets were full of people that looked — and spoke — like they believe their beloved Hamburg can pull off the escape of all escapes.

Read more: Hamburg down after 55 seasons

Asking a group of five Hamburg fans for their bets ahead of the game, all of them thought their team would somehow pull it off. Up until the moment Max revealed the unfortunate truth. "We have to be… erm… realistic,” he said with a heavy Hamburg accent. His friends made sure to silence him. "Stop it, Max!”

When the players arrived at the Volksparkstadion, the fans showed them exactly how much this game matters to them. No matter how small the chances, for the HSV faithful it was about the fight. It was about pride. And most of all, it was about the players showing the same passion their fans have shown so many times over the years.

And it worked. The atmosphere at the ground was electric. The traditional Hamburg anthem was sung with the pathos of a cup final.

Be it in Juve or in Rome,

I think of Hamburg, my pearl,

The players looked just as affected by the atmosphere. Endless runs, tackles and aggression reserved for a World Cup final showed that the message had been received. And along came the first goal, after VAR awarded a penalty for handball.

When Borussia Mönchengladbach equalized, the stadium was silenced for a few short moments. However, the Nordtribüne made sure the volume was quickly restored. Hamburg were back in the rhythm, and again, the players' fighting spirit showed they're not willing to give up just yet.

These were tense moments, supporters constantly looking up to the big screen to check for an update from the Wolfsburg game. The occasional chant supporting Cologne was heard in the Hamburg stands. But the tensions were mostly translated into passionate support for the local side, through non-stop singing and jumping, led by the Nordtribüne.

And it worked. HSV scored a second, and the stadium went wild.

Still, the travelling Gladbach fans taunted their hosts with a clock counting backwards towards HSV's official relegation, and the reaction from the home end was unwavering. The away end's chanting was swallowed by the decibels created by the HSV fans.

'Even when times are hard'

As the end of the game, and indeed the season, edged closer, it was clear that HSV would not manage to escape relegation this time. But the home fans let their players know that they can forgive:

"Hamburg I love you so,

Even when the times are often hard,

I know that I belong here,

Where I was born,

Where I played as a kid,

In the streets that I call home.”

Tears were running down the eyes of some fans, as if they themselves felt like they could stop their club's first ever relegation with their voices alone. Chants about local rivals St. Pauli were their way of saying: 2. Bundesliga, we're on our way. 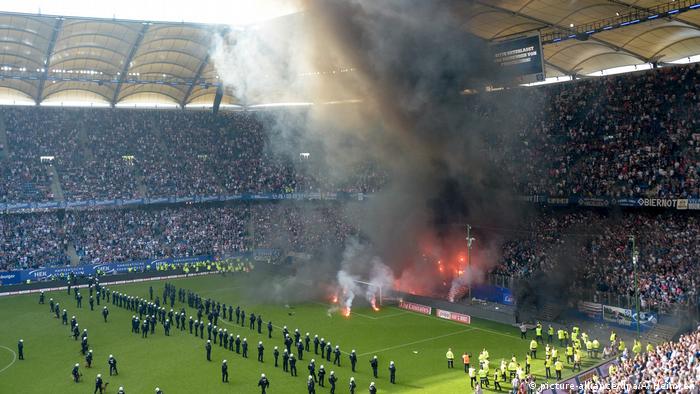 Play was stopped for several minutes in stoppage time after some fans threw pyrotechnics on the field.

And then, just before the final whistle, a series of explosions was heard.

A small group of HSV fans started throwing pyrotechnic devices towards the pitch, causing the match to be stopped. It felt like a complete distortion of the fans' reaction from minutes beforehand. The majority of Hamburg's support, however, made sure that their club will earn their dignity and respect that were seemingly hurt by the actions of a few.

'We are the people of Hamburg'

Chants of "We are the people of Hamburg, you are not” were heard from most of the stadium, the Nordtribüne included. Hamburg's different fan groups were not willing to let that ruin their final goodbye from the Bundesliga. Once the group that caused the match to be stopped started leaving the stadium, the rest of Hamburg's active support started calling them "cowards,” accusing them of running away from the massive police presence that awaited on the pitch.

And that was it. The clock has officially stopped, and Hamburg will play in the 2. Bundesliga next season. But a club of HSV's stature is well-equipped to deal with the fall, both on and off the pitch. The fans have certainly showed that they're behind their club, even "when times are often hard.” Now bring on the Hamburg derby.

After 55 seasons in the Bundesliga's top flight, Hamburg have been relegated despite victory on the final day. Elsewhere, Borussia Dortmund clinched fourth by the skin of their teeth as Hoffenheim claimed third. (12.05.2018)