Father of Palestinian girl at center of refugee controversy thanks Germany | News | DW | 17.07.2015

Father of Palestinian girl at center of refugee controversy thanks Germany

The father of Palestinian girl Reem Sahwil, who burst into tears at a meeting with Chancellor Merkel in an incident that unleashed a social media storm, has told DW he is thankful to "Germany and the Germans." 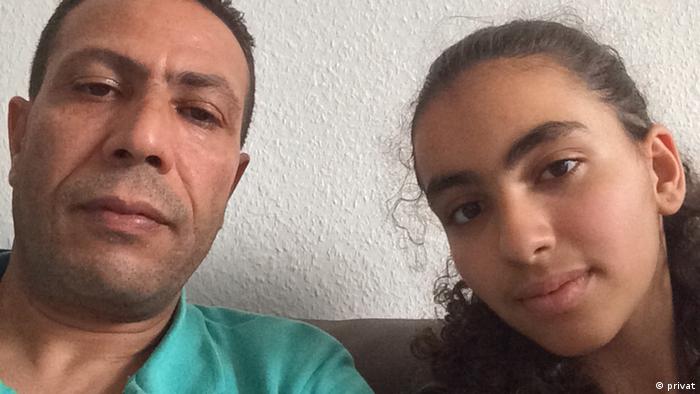 In an interview with DW's Arabic service, Atif Sahwil (seen left with daughter Reem in above photo) praised Merkel for her openness and voiced understanding for her position as the leader of Germany. His comments come after the chancellor told his daughter Reem, "Politics is sometimes hard," upon hearing that her family may be deported.

"I was pleased at the reaction of German Chancellor Angela Merkel to Reem's question. Ms. Merkel did something that no Arab state leader would ever do. Here in Germany it is normal that Ms. Merkel as chancellor is open toward the people and the public," he said, adding that Merkel was "in a position of responsibility and had to keep the country's laws."

"It was a dream that my daughter Reem was able to meet the German chancellor, the most influential woman in the world. I am also happy that Reem was allowed to speak about the situation of refugees," he said.

His remarks come in response to a controversy provoked by an encounter on Wednesday, in which Merkel talked with 29 pupils at a high school in the northern German city of Rostock.

During the talk, filmed by public broadcaster NDR, Reem, who has lived with her family in Germany for four years, told Merkel that her prospects in Germany were uncertain, as her family had only a temporary stay on deportation back to Lebanon. 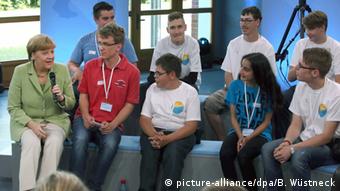 Merkel aimed to talk to the pupils about their aspirations

Reem burst into tears shortly after Merkel said, "Politics can be hard," and that Germany could not take in all Palestinian refugees or those from Africa, meaning that "some ... will have to go back."

The chancellor then moved over to console her.

Footage of the incident went viral in social media on Thursday, with Merkel's behavior drawing condemnation from many commentators.

Atif Sahwil said that the "media frenzy" was getting on his and his family's nerves.

"There are lots of journalists and reporters in front of the house, all wanting an interview with Reem. I had to smuggle her out of the house to school, where she was given her report today," he said, adding: "All her marks were good."

A Palestinian refugee who burst into tears after being told by Angela Merkel that "politics is sometimes hard" has defended the German chancellor. Merkel has been accused of heartlessness. (17.07.2015)

Reem: The Palestinian girl who asked Merkel the tough questions

Rarely do politicians have to come face-to-face with the problems of their people. Reem, a 14-year-old Palestinian girl seeking asylum in Germany, demonstrated to Chancellor Merkel the reality of a refugee's life. (17.07.2015)