Not much: These words could summarize the progress made so far by the EU in the refugee crisis. With just a week to go to the next summit, the European Commission has again urged member states to do more. 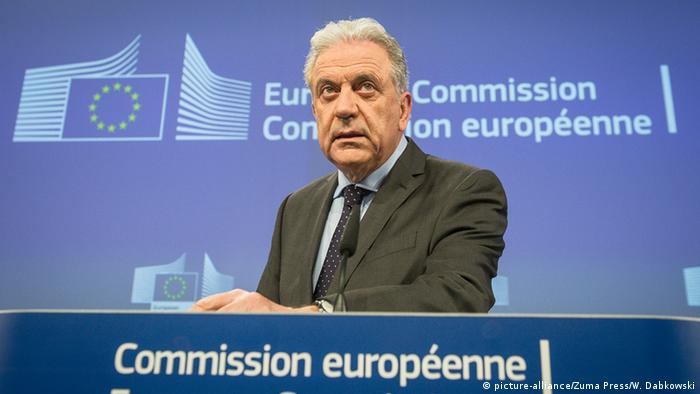 More than 300 people who tried to make their way from Turkey across the Mediterranean to the shores of EU-member Greece have died in the first six weeks of this year, many of them children. In one way, this number was at the heart of what Dimitris Avramopoulos was talking about on Wednesday.

Giving his report on what the EU calls its 'agenda for migration,' the EU's commissioner for the topic referred to the bloc's "moral duty", reminding everyone "we are talking about human beings."

But in another way, these human beings seemed to hardly play a role at all.

How progress is measured

'Schengen', 'relocation' and 'hotspots' - these are some of the terms and concepts by which the EU measures 'progress' on the migration issue.

Though the word evokes notions of either a 'hot tub' or a 'hot seat', the name 'hotspots' refers to reception centers on the shores of Italy and Greece at which arriving migrants are supposed to be fingerprinted and have their data fed into databases. If nothing much can be done to prevent people from getting to Europe, let's at least try to manage their arrival - that's the reasoning behind the 'hotspots'.

But of the eleven reception centers planned and agreed upon, only three are up and running - two in Italy, one in Greece - prompting seasoned Brussels correspondents to sigh:

"Greece has started stepping up its efforts," says Avramopoulos, "in ten days, the centers will be ready, with the 'hotspots' fully operational."

"Yes, they were slow," Avramopoulos adds about his fellow countrymen in Greece, "but things are moving fast now and from the moment these centers are working, things will be totally different."

But it's certainly not just Greece, this country at the EU's southeastern tip, that hasn't made good on its commitments to do what the EU agreed to do. Much of what hasn't been done is summarized on social networks with the hashtag #refugeecrisis.

That becomes obvious with regard to 'relocation', another one of these concepts with which the EU measures the success of its response.

In September last year, all 28 EU members had - after much dispute - agreed to relocate 160,000 persons "in clear need of international protection" from Italy and Greece, to take some pressure off these two EU members bearing the brunt of surging migrant numbers.

So far, not even 500 have actually been 'relocated' to other EU member states.

"If all member states had done what they had to do, the landscape of the situation would be different today," Avramopoulos said, adding that he had written a letter to each and every of the Union's interior ministers to remind them that they are bound by the relocation decisions which have to be implemented immediately."

More at stake than area without border controls

And then there's 'Schengen'. The system, under which most EU members and some outside of the union refrain from internal border controls, has been essentially - at least temporarily - dismantled since the increasing numbers of migrants at their borders prompted several EU countries, like Germany, to re-introduce border checks.

Commission President Jean-Claude Juncker is not alone in fearing that more is at stake than may be obvious at first glance; that indeed, the future of the European Union stands or falls with 'Schengen'.

But in the eyes not only of Hungary and Austria, Greece has shown it absolutely cannot be trusted to secure the external borders; in light of this, a "defense line" (to use the words of the Hungarian government) should be erected in Macedonia instead, and Greece effectively be kicked out of the Schengen agreement.

While agreeing that secure external borders were a precondition for an area free from internal border controls, and that there were "shortcomings in Greece's external border management," Avramopoulos refused any consideration that Greece could be expelled from Schengen.

It remains up to EU leaders to consider "recommendations" how Greece could do a better job at securing the Union's external borders.

Crunch time for the EU – once again, or maybe not yet?

Discussions about the EU's response to the migration crisis are scheduled for the second day of the EU summit, next Friday. It is set to be another occasion at which member states blame each other for failing to live up to commitments each of them made regarding any of the concepts around which a European response to the refugee crisis revolves.

The man presiding over the EU summit, Council President Donald Tusk, has already indicated that notwithstanding all appeals for "immediate action," such as the ones issued today by Dimitris Avramopoulos, nobody should hold their breath expecting any groundbreaking decisions next week.

The EU's current plan is to protect external borders and, if necessary, expel Greece - not from the eurozone, but from the Schengen Area. That will not keep people from moving to Europe, DW's Bernd Riegert writes. (26.01.2016)