Far-right party deputy: ′We are the mainstream in Estonia′ | Europe | News and current affairs from around the continent | DW | 13.03.2019

Far-right party deputy: 'We are the mainstream in Estonia'

The euroskeptic Conservative People’s Party (EKRE) made major gains in Estonia's parliamentary election with an anti-immigrant campaign warning of an upsurge in crime. Is this the face of the new mainstream?

Estonia's far-right EKRE party could soon be in government. In the country's most recent parliamentary election it had a surge in support, taking nearly 18% of the votes. After the election, the current Estonian prime minister backtracked on campaign promises and offered the euroskeptic EKRE coalition talks.

In the campaign, the Conservative People's Party said Estonia could be overwhelmed by immigrants.

DW's Tim Sebastian asked the deputy EKRE leader about racist comments he made before he entered politics.

"If you're black, go back," Helme said during a television appearance in 2013, adding, "I want Estonia to be a white country." In the Conflict Zone interview, Helme told Sebastian "80 percent of Estonians agreed with that statement."

Instead Helme offered his own view of the problem: "What is racist in Europe nowadays is the replacement of indigenous people. That is pure racism."

The EKRE deputy chairman also gave this defense: "I was a talking head in a commentator show… You're expected to say things in a more upfront way."

Sebastian asked him about linking immigration and crime, including Helme’s statements that an influx of immigrants would lead to raping and pillaging in the country. Helme offered this comparison: "There is a massive, massive problem with criminality in Sweden, Finland, Germany, UK that is brought in by… immigrants... In Sweden, in Norway the rape ratios have gone up a thousandfold."

When Sebastian asked him to provide any examples of raping and pillaging in Estonia, Helme offered: "We have two cases of Syrians in jail right now for trying to ignite their wives, trying to burn them."

Helme dismissed Sebastian's challenge on using fear in the campaign. "People are scared anyway," he said. Helme also defended provocative statements from his father, Mart Helme, who is the chairman of the EKRE. 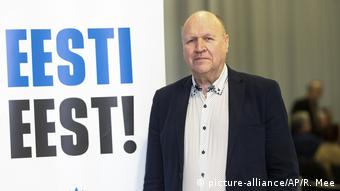 "'The indigenous people are being replaced with Negroes.' That's what your father, the chairman of the party, said." Sebastian said.

Helme offered a slight correction: "With immigrants, with immigrants," but then went on to say the wording "doesn't really even matter."

"We don't want to be replaced in Estonia with foreigners," Helme said.

Sebastian pointed out that Estonia had accepted just 206 people as refugees as part of an EU quota plan.

"This does not make any difference whether they are from Ukraine or from Nigeria.  … They are not Estonians."

Helme, whose party has been offered coalition talks, said the Estonian government was not accurately releasing the number of immigrants to the country.

"The government is lying … [or] doesn't know what it's doing."

The EKRE deputy leader attacked Estonian media for reporting on his party's association with the anti-immigrant 'Soldiers of Odin' group: “This is a boogeyman for the left. They have done nothing wrong. Why should they be demonized?”

Estonia was the first Baltic country to allow same sex marriage but the EKRE has attacked the move.

On Conflict Zone, Helme condemned three Tallinn circuit court judges who allowed same sex couples to marry saying they "should be fired … These people are no judges. They have broken the law."

The deputy of the euroskeptic party said that the EU was not very popular in Estonia.

"People don't like [the] European Union at all," Helme said."We are sovereigntists. We are against any attempts to take away power from the nation states."

Helme said the European Union was slipping into Soviet-style oppression.

"People who haven't lived under the Soviet rule might not recognize the trends, but the trends are unmistakable."

He said contemporary anti-hate speech laws were repressive. "People have been put into … prison in European Union for hate speech. … This is the same as it was in the … USSR."

"They wanted to jail Marine Le Pen to an asylum, a lunatic bin, because she was saying the wrong things in public," he offered as an example.

Helme also defended his criticism of the United Nations and his father's fear of a world government.

"I think the entire history of the United Nations shows you that they are bent on taking power," Helme said.

The far-right EKRE received nearly 18 percent of the vote in Estonia's parliamentary election. Political scientist Florian Hartleb talks to DW about the party's origins, and what its success means for Europe. (04.03.2019)

First results from Estonia's parliamentary election showed an unexpectedly large lead for the right-wing Reform Party, with the ruling Center Party suffering a slump. The populist EKRE was expected to make gains. (03.03.2019)

The center-right party's leader Kaja Kallas has ruled out a coalition with the far-right EKRE, who came third in Sunday's election. Kallas is now on track to become Estonia's first female prime minister. (03.03.2019)