A tour of Sachsenhausen, a memorial to Nazi death camp victims, was disrupted in July by far-right Alternative for Germany visitors. The incident, made public by a Berlin newspaper, has prompted a belated police probe. "Five or six" persons among 17 visitors "constantly interrupted" a tour of the former Sachsenhausen concentration camp near Berlin on July 10, staff at the memorial site told the Tagesspiegel. Members of the group reportedly uttered "manifestly far-right and historically revisionist" interjections.

The disruptive visitors from the Lake Constance constituency of opposition Alternative for Germany (AfD) co-leader Alice Weidel were reportedly traveling under a federally-funded scheme to enable voters to visit parliamentarians in Berlin.

A spokesman for Weidel said she herself did not take part in the tour and was "quite surprised" by the alleged incident.

However, the visit to the memorial and the Sachsenhausen Museum was explicitly requested by Weidel for the information tour, the Federal Press Office (Bundespresseamt, BPA) told DW.

Tagesspiegel said a federal government spokeswoman had confirmed that "anti-Semitic and historically untenable remarks" were made by one visitor, prompting the expert guide on the day to break off his presentation.

Nazi SS leader Heinrich Himmler commissioned architects to erect Sachsenhausen in 1936 on the fringe of the town of Oranienburg, 40 kilometers (25 miles) north of Berlin, as a structure to exhibit widespread terror and administer other camps in Nazi-held territory.

Tens of thousands of inmates lost their lives to starvation, ill-health and executions up until Sachsenhausen's liberation by Soviet and Polish troops in 1945. 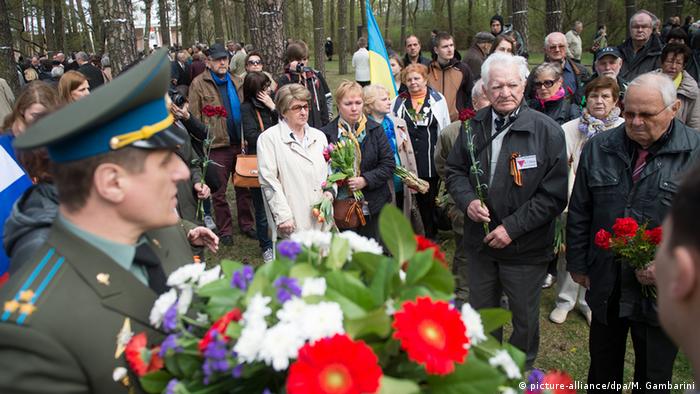 Among its 204,000 inmates over those nine horrific years were German dissidents, citizens of other European nations, and minorities racially targeted by the Nazis.

Horst Seferens, spokesman for Brandenburg state's foundation which oversees memorial sites outlying Berlin, said that some of the AfD visitors of July 10 had sought to relativize the crimes at Sachsenhausen with alleged acts by war-time Allies that defeated Hitler's Germany.

The AfD interrupters, said Seferens, had cast doubt on the existence of a gas chamber installed at Sachsenhausen, had trivialized Nazi death camp crimes, and had belittled memorial site staff by implying manipulation and incompetency.

The Federal Press Office told DW that it first learned about the incident at the end of July and had been specifically asked by Weidel to include Sachsenhausen in the constituents' trip to Berlin.

For the purpose of political education, each of the Bundestag's 709 parliamentarians could invite 50 citizens from his or her electorate on "information trips" to gain insights into "political" Berlin and its history on three occasions each year.

These "information trips" were organized and financed via the press office, said the BPA.

Locations visited included the Bundestag's chamber itself, federal ministries, the Chancellery, the BPA and also memorial sites recalling Germany's Nazi past and the former East Germany.

"We regard the political education trips as animportant component of our work," said the BPA. adding that in the wake of the incident it was consulting with the staff of memorial sites.

"The federal government rejects decisively and unmistakably.any relativization and trivialization of the crimes of the National Socialists, the war of extermination and Holocaust begun from Germany," said the BPA.

Josef Schuster, president of the Central Council of Jews in Germany, said the AfD adherents' behavior was "bitter" but not surprising.

The AfD seemed electorally ready to use any means, he said, even by trampling on the dignity of Nazi victims.

Memorial sites, enduring more and more "shameful and unacceptable behavior from visitors" needed support, including financial resources, to assist their staff to deal with such situations, Schuster said.

Every evening at 1830 UTC, DW's editors send out a selection of the day'spaniahb2018
hard news and quality feature journalism. You can sign up to receive it directly here.

'Remembrance has no expiration date' at Sachsenhausen, Ravensbrück

German Foreign Minister Frank-Walter Steinmeier was among dignitaries marking 70 years since the liberation of the Sachsenhausen Nazi concentration camp, saying remembrance must endure after survivors pass on. (19.04.2015)