The fallout from the arrest of a German "double agent," who was allegedly filtering information to the NSA, continues to create a stir. Germany's foreign minister and interior minister are the latest to have spoken out. 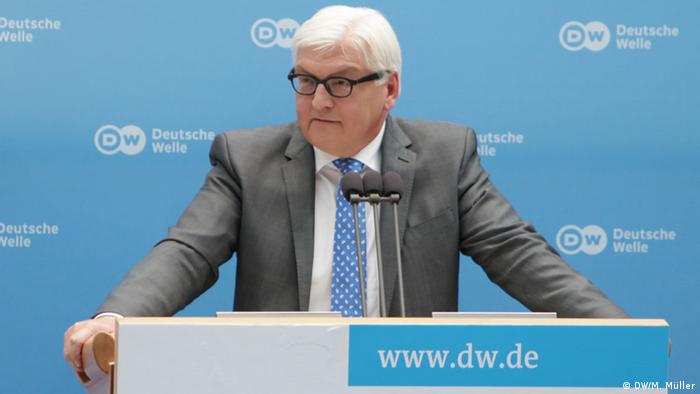 Foreign Minister Frank-Walter Steinmeier said during a visit to Mongolia on Sunday that: "If the reports are true, then we're not dealing with small issues." Therefore the United States must "collaborate [with Germany] since it has the capability to obtain the fastest possible information [on the subject]." Steinmeier also said that "out of self-interest, the US should also follow their obligation to cooperate," and not simply sweep it under the carpet.

German Interior Minister Thomas de Maiziere also told the Bild newspaper "quick and clear" statements need to be made by the US concerning the double agent.

On Wednesday, German authorities arrested a 31-year-old employee of the country's foreign intelligence agency, known by its German acronym BND. The employee was detained on suspicion of espionage. BND officials said that the suspect worked as an aide in the division "Foreign Deployment Areas" and was not an actual agent.

The suspect allegedly sold 218 documents to an unnamed US intelligence agency for 25,000 euros ($33,000), according to the German news agency DPA, which cited unnamed BND officials. According to the BND, the documents did not contain particularly sensitive information.

The German daily tabloid newspaper Bild reported on Friday that three of the 218 documents were related to Germany's parliamentary inquiry into NSA surveillance operations. The suspect allegedly received orders directly from the US embassy, according to Bild. The German Foreign Ministry on Friday called on US Ambassador John Emerson to cooperate with the investigation.

Public broadcasters WDR and NDR in cooperation with the daily Süddeutsche Zeitung originally broke the story. They reported that the suspect was originally detained on suspicion of trying to sell information to the Russians. During questioning, the suspect then supposedly admitted working for the US.

German parliamentarians across the political spectrum, including Merkel's traditionally pro-American CDU, have already expressed outrage over the allegations.

"If it turns out to be true that a BND employee worked for the US embassy for years, it would be a huge breach of trust in the transatlantic relationship," Stephan Mayer, the internal affairs spokesman for Merkel's conservative parliamentary grouping, told Bild.

"The responsibility for the acitivities of the BND lie with the federal chancellery," Volker Beck, the Greens' internal affairs policy expert, told Handelsblatt Online. "We expect that the highest levels will order a clarfication of the incident without reservation."