Fact check: How high is the risk of contracting COVID-19 in a stadium?

Some spectators are reported to have contracted COVID-19 after attending Euro 2020 football matches. The risk of infection is real and the delta variant — along with the Euro 2020 fixture — aren't helping matters. 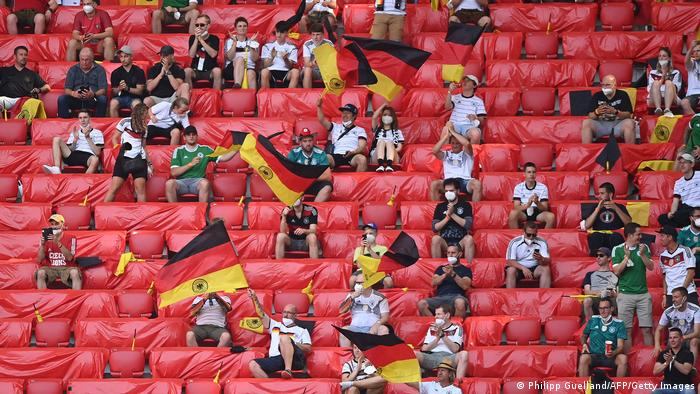 Covering seats helps maintain distance between fans, but not everyone follows the rules

The European Championship is being held in 11 different cities in 10 different countries. The images we see on our television or computer screens seem strange to many — 18 months into the coronavirus pandemic: Crowds in confined spaces spreading aerosols through their chanting and singing, thousands of people not wearing masks. What impact will the first major sporting event to be held with large crowds of spectators in the stands have on the third wave of the pandemic, which is only now subsiding? Our fact check provides the initial answers.

At some EURO 2020 matches, fans were screened in advance after returning positive COVID-19 rapid tests; at others, spectators tested positive for the virus after the fact.

Most recently, the Scottish Health Authority found that 1,991 fans from Scotland who tested positive for the coronavirus had previously attended European Championship events, including stadiums in London and Glasgow, as well as fan festivals, pub screenings and private soccer parties. According to the report, 397 infected fans watched the England vs. Scotland match at Wembley Stadium in London on June 18, and may have unknowingly spread the virus there.

The Scottish data is not evidence of infection in the stadium, but suggests that hundreds of infected people entered the arena — even though stadium visitors in London were required to present either a negative test result or be proven vaccinated or recovered, according to UEFA rules.

One explanation could be that the mandatory tests for Wembley are only rapid tests, and these are not carried out on site, but may be up to 48 hours old. So stadium-goers may have done the tests before arriving and then become infected during their journey. This is a scenario that aerosol researcher Gerhard Scheuch also considers plausible. "There were then maybe two to three superspreaders who infected the whole group," he told DW.

There were also a number of coronavirus cases after the Finland vs. Belgium match, which took place in St. Petersburg, Russia. In Denmark, spectators tested positive for the delta variant after the match between the hosts and Belgium.

According to Finnish media, at least 86 infections were detected in people returning home from Russia. In most cases, it is unclear whether they were infected in the stadium itself or elsewhere, like during travel to or  from the match.

On top of this, three spectators tested positive for the delta variant in Copenhagen following the match between hosts Denmark and Belgium. In Budapest, a French family are reported to have tested positive after France's match against Hungary.

Aren't football games harmless, since they are open-air events?

Experts agree that the chance of contracting COVID-19 at outdoor events is relatively low as fresh air dilutes aerosols — it is the airborne particles produced by breathing and talking that carry the virus. But only if the minimum personal distancing from others is maintained.

William Schaffner, professor of infectious diseases at Vanderbilt University in the United States, also points out that stadium attendance during Euro 2020 in and of itself poses a very low risk of infection, provided safety measures — such as limiting the number of spectators and social distancing — are observed. 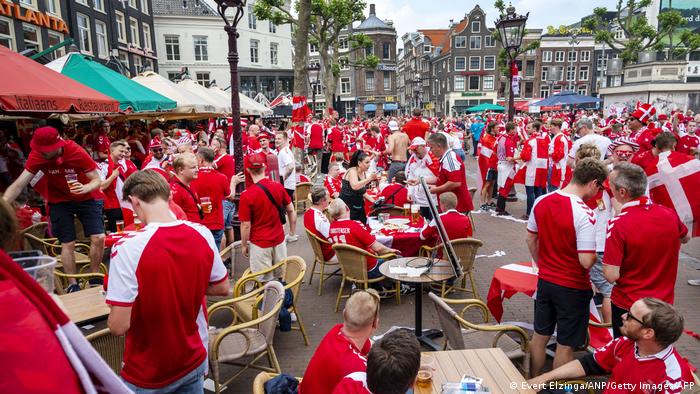 Gatherings outside of the stadium, like these Danish fans in Amsterdam, are part of the problem

"If an infected person exhales the virus there, the aerosols linger for a relatively long time," he said.

Most problematic, according to Scheuch and Schaffner, is what happens before and after a game; tens of thousands of fans use buses, trains and planes to get to and from the stadium. They stay overnight in hotels and may want to party in bars after a game.

What about the fact that many aren't adhering to the requirement to wear a mask?

Up until now, wearing a mask in stadiums at Euro 2020 has been mandatory, and UEFA officials in the stadium are supposed to remind fans of the rules. But many people in the arena still fail to follow them.

What consequences does this have? "Masks are not perfect," says Schaffner. "But they do provide some protection if everybody is yelling around you at a soccer game."

An as-yet unpublished study seen by DW suggests the same. According to the RWI Leibniz Institute for Economic Research and the SDU University of Southern Denmark in Sonderborg, Bundesliga matches with large crowds led to a significant increase in new infections. This was particularly the case when masks only had to be worn on the way to stadium seats, but not in the fan block.

This makes it all the more incomprehensible to many that mask rules for the last four European Championship matches in London have been relaxed in precisely this way: Since June 27, the UEFA website has said that if you are sitting in your seat at Wembley Stadium, you can remove your face covering. This has to do with the fact that the games are part of a study on the conduct of events. More information about the study can be found in this UK government document. 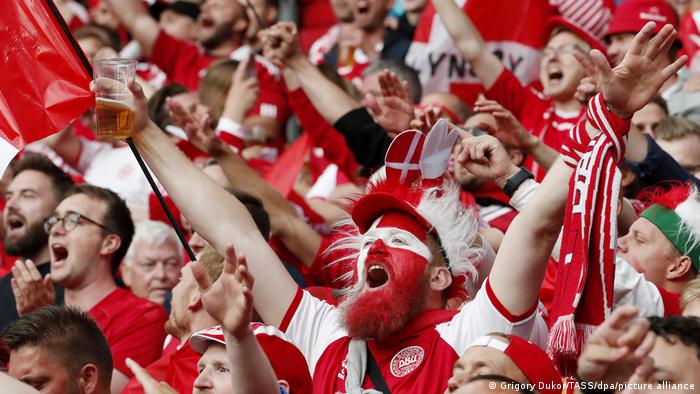 Danish fans in Copenhagen seemed comfortable gathering together without masks

Can distancing rules work inside a stadium?

The first half of the European Championship fixture has already shown that the specified minimum distance in the arenas is not being observed. In Copenhagen, Munich, Budapest, and other venues, many fans stood and sat close together. At the same time, the maximum capacities in many stadiums were drastically reduced by UEFA so that such distances could be maintained.

The exception so far has been Budapest, where not only a full stadium, but also fan marches with up to 20,000 participants were allowed to go ahead. In Copenhagen, UEFA said the stadium was at over 70% capacity. 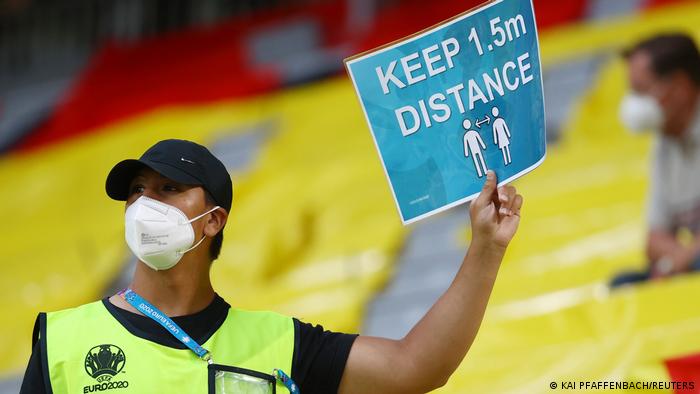 Worth a try: A steward in Munich holds up a sign reminding fans to keep their distance

The semifinals and the final are to be played at London's Wembley Stadium with up to 75% capacity. This means only every fourth seat will remain free — too few to maintain a minimum distance of 1.5 meters (about 5-feet) between spectators. UEFA also seems to be aware of this. On its website, the only words regarding distancing at Wembley are: "Keep your distance from other fans wherever possible." A few days ago, the wording was still that you should keep at least 1-meter away.

Could Euro 2020 accelerate the spread of the delta variant?

There is growing concern the number of infections being caused by the COVID-19 delta variant is on the rise in host countries Russia and Great Britain. 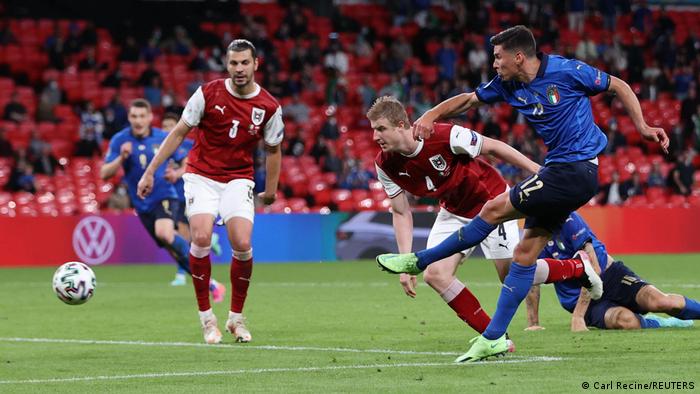 If UEFA has its way, Wembley will have even more spectators for the semifinals and final than attended the Austria vs. Italy game

The football body also announced that around 2,500 UEFA officials, media representatives and VIP guests will be allowed into the stadium without undergoing mandated quarantine upon entering the country. Officially, though, they are only allowed to leave their hotel rooms to go to the stadium.

Many researchers and politicians find the number of spectators being allowed to attend irresponsible, including Germany's Interior Minister Horst Seehofer and SPD member of parliament and health expert Karl Lauterbach.

Aerosol researcher Scheuch calls games going ahead under conditions like those mentioned in the United Kingdom "absurd." "The incidence rate there is simply too high to safely hold such mass events." 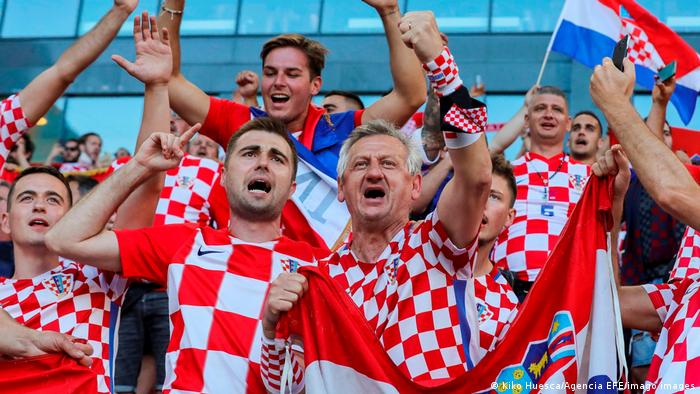 Although the European Championship could drive up infection rates in regions and countries where the games are being held, Scheuch considers the risk of the tournament being responsible for driving the spread of the delta variant in Europe to be low. This is due to the fact only a comparatively small number of visitors would travel in and out of each country.

Moreover, the scientist says the more contagious delta variant is already on the advance in Europe either way. Other experts also believe that delta will soon dominate in other countries, regardless of Euro 2020.

The World Health Organization (WHO), nevertheless, holds the European soccer championship partly responsible for the fact the number of cases in areas of Europe is again on the rise. WHO expert Catherine Smallwood spoke recently of an "end of a 10-week decline" in coronavirus infections in Europe. The European Championship is driving this development, she added, with crowds gathering not only at the stadium but also in pubs and on public transport.

A year after Euro 2020 was postponed, the plan for the rearranged tournament remains unclear. UEFA appear to be demanding fans in stadiums in multiple cities, but is that possible? The hosts themselves are not so sure.