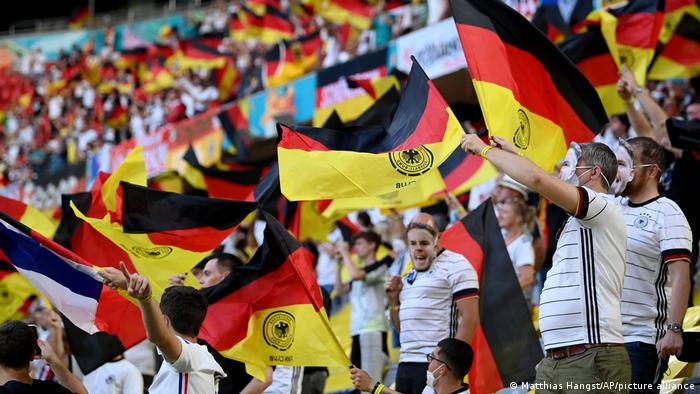 A trip to London would be ill-advised, a health expert has warned

German soccer fans have been urged not to travel to London for Tuesday's Euro 2020 match against England by a senior official of the World Medical Association.

Concerns abound over the highly infectious delta variant of the coronavirus, which has resulted in a surge in cases in Britain, prompting Frank Ulrich Montgomery, chairman of the WMA, to tell Bavarian newspaper Passauer Neue Presse: "Anyone who is unvaccinated is acting irresponsibly, given the delta variant prevalent in the UK and its risk of infection.

"Even a vaccinated person who follows the social distancing rules and makes a pilgrimage to the stadium is taking a limited risk," he added.

Germany's nerve-wracking 2-2 draw with Hungary set up Tuesday's clash with England at Wembley Stadium in an encounter that will decide who proceeds to the quarter-finals.

Under current COVID-19 travel restrictions, anyone returning to Germany from Britain must undergo a two-week quarantine, primarily because of the highly contagious variant.

German Chancellor Angela Merkel said on Wednesday she would like to see this policy mirrored throughout the European Union.

Crowds of 25,000 attended England's three group games, and now authorities have given the green light for some 45,000 to attend England's encounter with Germany, which is around 50% of the stadium's capacity. That will rise to more than 60,000 for the semi-finals and final match, which will also take place at Wembley.

"I consider this to be populism and I can only advise against travel to see the games," Montgomery said. "I don't understand why Prime Minister Boris Johnson is allowing this."

Here's a roundup of the major coronavirus developments around the world:

The vaccine produced by Pfizer-BioNTech is highly effective against the Delta variant, a Pfizer official said on Thursday.

First identified in India, Delta is becoming the globally dominant COVID-19 variant, according to the World Health Organization.

"The data we have today, accumulating from research we are conducting at the lab and including data from those places where the Indian variant, Delta, has replaced the British variant as the common variant, point to our vaccine being very effective, around 90%, in preventing the coronavirus disease, COVID-19," Alon Rappaport, Pfizer's medical director in Israel, told local broadcaster Army Radio.

Russia on Thursday reported more than 20,000 new infections and 568 deaths, a peak not seen since January, as the country battles a surging outbreak of the Delta variant exacerbated by a sluggish vaccine rollout.

Of those deaths, 92 were recorded in Moscow — the highest in one day since the start of the pandemic, according to the state-run TASS news agency.

The surge in cases since mid-June has been sparked by the variant first identified in India. It represents some 90% of new infections in Moscow, the city's mayor Sergei Sobyanin said.

Coronavirus rampant: How deadly is Delta?

Coronavirus rampant: How deadly is delta?

French President Emmanuel Macron has called on EU countries to "be vigilant because of the much-talked-about delta variant." Speaking ahead of an EU summit in Brussels, Macron added that the EU needed to up its vaccination campaign even more.

"For me, one of the issues of discussion is to be really taking coordinated decisions in terms of opening of borders to third countries and on recognizing vaccines because at this stage we have to limit this to the vaccines that have been approved by the European medical authority," he said.

Malta and the Balearic Islands will be added to England's green list of places that are safe to visit without requiring quarantine upon return, UK transport minister Grant Shapps has announced.

"Six countries including Tunisia and Haiti will be put on the red list. All these changes will come into effect from Weds 30 June at 4am."

He added that plans are afoot to allow fully vaccinated British residents to travel without needing to isolate upon return from so-called amber countries later in the summer.

Hundreds of students from various parts of Spain have apparently become infected with COVID-19 after graduation trips to Mallorca.

In Madrid alone, at least 245 young people have tested positive after a trip to the Balearic island, regional authorities have announced.

The Basque Country has reported 49 positive cases, with the regions of Valencia and Murcia registering 50 combined.

All of the individuals visited Mallorca between June 12 and June 18 and are believed to have contracted the Alpha variant which originated in the UK.

Formula One's British Grand Prix in July will take place in front of a capacity 140,000 crowd, Silverstone officials have confirmed.

The link between food and disease

COVID-19 Special: The link between food and disease

Africa is struggling in its fight against the pandemic as a third wave sweeps the continent and countries find it difficult to vaccinate their populations, Africa Centers for Disease Control and Prevention (Africa CDC) director John Nkengasong said.

The COVAX program, co-led by the World Health Organization (WHO) for fair distribution of doses, is planning reforms as it has been shunned by rich countries and failed to meet the needs of the poorest.

Africa CDC director Nkengasong said he was more worried about getting vaccines in time, regardless of where the doses came from.

"The third wave has come with a severity that most countries were not prepared for. So the third wave is extremely brutal," Nkengasong said during a weekly online briefing.

"Let me put it bluntly, we are not winning in Africa this battle against the virus so it does not really matter to me whether the vaccines are from COVAX or anywhere. All we need is rapid access to vaccines," he said.

Nkengasong said at least 20 countries were in the midst of the third wave, with Zambia, Uganda and Democratic Republic of Congo among those whose medical facilities were being overwhelmed.

Nearly all COVID-19 deaths in the United States now are in people who weren't vaccinated, according to analysis carried out by the Associated Press.

Analysis of available government data from May shows that "breakthrough" infections in fully vaccinated people accounted for fewer than 1,200 of more than 853,000 people that went to hospital with COVID-19, amounting to around 0.1% of all hospitalizations.

The US Centers for Disease Control has confirmed that myocarditis and pericarditis can occur after mRNA vaccination among young people. But the cases are rare. Medical experts continue to advise vaccination.