On the eve of the highly anticipated game between England and Germany, lawmakers have criticized the UK government and UEFA for allowing thousands of fans to attend Euro 2020 games. 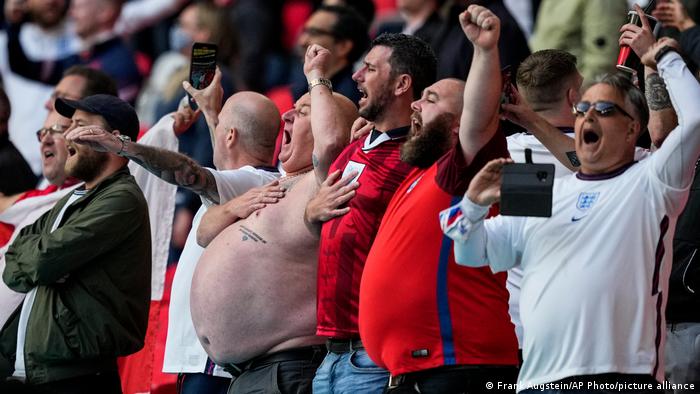 Germany play England tonight in front of more than 40,000 fans

German Interior Minister Horst Seehofer on Tuesday said it was "irresponsible" of the British government to increase the number of spectators at the remaining matches of Euro 2020 in London.

With both the semifinals and final due to take place at London's Wembley Stadium, Seehofer is keen on seeing fewer fans in the stands over fears of spreading the highly contagious delta variant of the coronavirus that is now prevalent in the United Kingdom.

Wembley will see around 40,000 fans for this evening's last-16 clash between England and Germany, around double the number that could attend group phase games.

Last week the British government announced the crowd capacity at Wembley would be increased further, to around 60,000 for the latter stages of the tournament, which is taking place a year later than scheduled due to the pandemic.

The increase was described by UEFA President Aleksander Ceferin as "great news."

However, Seehofer was less enthused. "I think it is irresponsible for tens of thousands of people to congregate in a small area in countries that are considered to be virus variant areas of the highly contagious delta [variant]," Seehofer told the German newspaper Süddeutsche Zeitung, adding that German Chancellor Angela Merkel shared the view.

The interior minister pointed out that a capacity of 20%, in practice in Munich for the games the Bavarian city has hosted during the tournament, was a more appropriate measure.

This is "a benchmark that could also apply to the other venues."

The delta variant of the coronavirus, which is considered particularly contagious, is rampant across the UK.

Germany has therefore classified the UK as one of its "areas of variants of concern," according to the Robert Koch Institute for infectious diseases. This means strict quarantine regulations apply to those who return to Germany from the UK.

Kretschmann: 'Wrong signal to give impression pandemic is over'

The state premier of Baden-Württemberg, Winfried Kretschmann, said the decision "to let even more people into the stadiums now, as at Wembley, is brazen."

"The images of the European Football Championship so far gave the impression that the pandemic was over," he told Redaktionsnetzwerk Deutschland. "That is an absolutely wrong signal."

At the games in Hungary and Denmark, the stadia were "full to bursting," with little signs of social distancing and few masks in sight. "This recklessness leaves me stunned," Kretschmann added.

He told German mass-circulation daily Bild that things had gone well so far in Munich, and that it was a "conscious decision to wait until it was clear how infection rates would develop in our country." Around 16,500 fans were allowed to attend games at the Allianz Arena.

More than 55,000 spectators were allowed into the stadium in Budapest to watch group matches and the last-16 match between the Czech Republic and the Netherlands, something Söder did not approve of.

"I would not have done it like that in Hungary, would not have wanted to take responsibility for it. To be the starting point for a super-spreader event, football is not worth it in that proportion. Enjoy, yes, but enjoy with reason."

He said that "personally" it did not make sense to hold the games at Wembley, and that organizing the semifinals and final "in a stadium at a time when the United Kingdom itself is restricting its citizens' travel to the European Union" was lacking "a certain symmetry" and proportionality as required by UEFA.

As Germany and England gear up for a Euro 2020 football match, a "psychic" female elephant in Hamburg predicted a German victory.

Germany intends to join England in a kneeling protest before their Euro 2020 last 16 match. The captains of both teams are also set to wear special armbands for the game.

Jadon Sancho: Revered in Germany, cast aside by England

When Germany face England on Tuesday night, they will almost certainly not have to worry about Jadon Sancho. England coach Gareth Southgate's decision to keep Sancho sidelined is one that few in Germany can understand.