Flying Dutchman Max Verstappen produced a brilliant drive at Silverstone to win the 70th Anniversary Grand Prix. The Red Bull victory denied Mercedes victory for the first time in 2020, but they took the podium spots. 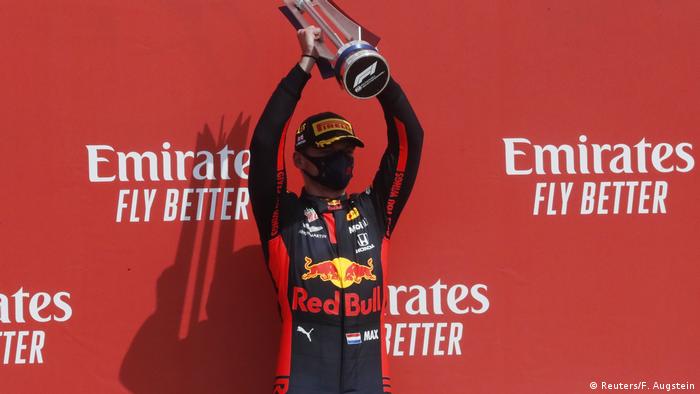 In scorching conditions at Silverstone with trackside temperatures reaching 44°C (111°F), Mercedes drivers Lewis Hamilton and Valtteri Bottas suffered significant tire problems throughout, but Red Bull's decision to go with hard tires in qualifying and at the start of the race proved to be inspired.

Verstappen started in fourth but immediately moved up to third on the first corner. Despite Hamilton and Bottas establishing an early lead out in front, the Dutchman remained cool, waiting to pounce on any Mercedes problems – which quickly emerged.

Bottas was raising concerns about tire heat as early as lap six, while Hamilton's were coming apart by lap 12. Despite pit stops, they were still having issues as they approached the half-way point.

Verstappen took the lead with ten laps to go and never looked back, securing his ninth career win. "We had a lot of pace in the car and we kept pushing," said the Dutchman. "We had a great day… we had the right strategy. I tried to put the pressure on [Mercedes] and they had to pit."

Hamilton offered his congratulations to Red Bull and Verstappen, saying: "They didn't have the blistering problems on the tires that we had today. It's unexpected but I'm sure the team will work out what the issues have been. At the end I was driving with half a tire."

Best team
Red Bull – Mercedes may have taken the other two podium spots but their tires clearly struggled in the heat. Red Bull's decision to go with hard tires ultimately proved crucial.

Drive of the day
Verstappen – The Dutchman and his team got their strategy just right and pounced at just the right time.

While Verstappen did everything right, Sebastian Vettel spinning out of control on the first lap under no pressure summed up the German's season.

Lap 52 of 52: Max Verstappen wins the 70th Anniversary Grand Prix at Silverstone! A brilliant drive, particularly early on, from the Red Bull driver, who took advantage of Mercedes' vulnerability in the heat. That's the first race this year that hasn't been won by the German team.

Lap 50 of 52: And there it is. Hamilton just had too much on the straight and flies round the outside of Bottas.

Lap 49 of 52: The final stages now. Bottas looks vulnerable to Hamilton, rather than being able to catch Verstappen. It's the Dutchman's to lose.

Lap 46 of 52: It took a litle longer than expected, but Hamilton eventually slides past on Leclerc's inside to move in to third.

Lap 44 of 52: Hamilton sets the fastest lap and looks certain to pass Leclerc soon. The Frenchman has slowed right down.

Lap 42 of 52: Hamilton hits the pits and comes out in fourth. Leclerc is up in to third. Will the championship leader have enough for a late charge here? However, there is some question of an infringement by Hamilton when he left the pit lane.

Lap 41 of 52: Leclerc is coming up on the rails here, he's fourth and might fancy his chances of nicking a podium spot. It's not going so well for the other Ferrari, with Vettel down in 12th.

Lap 38 of 52: How long can Hamilton stay out on these tires, surely not all the way? That's the big question here. Bottas doesn't look able to beat Verstappen in a straight race. Strategy is king today and tires, once again, the main issue.

Lap 33 of 52: Verstappen and Bottas both pit and the Red Bull man comes out ahead of his rival. Hamilton takes the lead, for now at least.

Lap 30 of 52: Vettel is not happy with his team, who have send him back out in 13th. Hamilton has also had a bit of a whinge about Red Bull.

Lap 27 of 52: Bottas takes back the lead! And then loses it again seconds later! Verstappen finally has to pit and the Mercedes man came out inches in front of him. But Verstappen won't back down and when the Finn goes wide, he retakes the lead. Are we finally going to get a non-Mercedes winner?

Lap 26 of 52: Verstappen's lead is almost 20 seconds now, Mercedes are really struggling. That might give Hülkenberg a chance for a first ever podium.

Lap 21 of 52: Both the Mercedes have pitted but they're starting to look a bit slower than Verstappen, who could well be on a one-stop strategy. The Dutchman will fancy this.

Lap 15 of 52: Hamilton does go in and, for only the second time all season, a non-Mercedes car leads. Can Verstappen make significant grround? Hamilton out in sixth, Bottas has moved to third.

Lap 14 of 52: Bottas pits, presumably earlier than planned, and returns down in sixth. Hamilton's tires are a state, so he'll presumably follow shortly. Verstappen is nipping at his heels.

Lap 12 of 52: Verstappen's engineers want him to go easy and cool the tires down. But he's having none of it: "this is my only chance" he says.

Lap 11 of 52: The familiar top three are pulling away from the rest, with about a second between Bottas and Hamilton and between Hamilton and Verstappen. Hülkenberg is a further seven seconds back. Verstappen looks like he might just have enough to trouble the Mercedes today.

Lap 6 of 52: The leader is among the drivers who is a little concerned about the temperature of his tires. One to watch there.

Lap 4 of 52: Bottas still leads, and holds the fastest lap point. And we've just seen the view of Vettel's start from the camera in his car. He went a touch wide on a kerb and had a big wobble, almost colliding with Sainz. There seems no obvious reason for the error. That's how it's going for Vettel at the moment.

Lap 1 of 52: The two Mercedes fly off and have an early battle for supremacy, with Bottas holding on just as Hamilton looked like passing him. Verstappen cruises past Hülkenberg in to third. But Vettel has had another Silverstone nightmare. It looked like he spun on the first corner and he's bottom of the pile. Catastrophe for the German, who started in 11th.

15:10 - It's very warm at Silverstone, which is likely to have all sorts of impacts here. Managing the heat will be important. The drivers are on their formation lap now.

15:00 - Hello and welcome to the second British Grand Prix in succession, though it's not officially called that, with this one also marking the 70th anniversary of Formula 1. We have about 10 minutes to wait until we're off.

As it happened on Saturday

Racing point driver Nico Hülkenberg will start third, a strong position for the replacement driver. The German is driving in place of Sergio Perez, who will miss his second straight race after testing positive twice for COVID-19.

Hülkenberg, who was let go by Renault at the end of last season, was a last-minute replacement for Perez for last weekend's British GP. After qualifying fifth, he was cruely denied an F1 return after his car failed to start in the garage.

Sebastian Vettel, who has struggled in his final season with Ferrari, will start 12th, four places behind teammate Charles Leclerc.

There is perhaps no better place for Formula One to celebrate it's 70th anniversary than Silverstone. The British circuit has held races since the 1940s and has been on the F1 calendar since the series' inaugural season in 1950.

To no one's surprise, Hamilton has excelled in Silvestone throughout his career. The Briton has won seven British GPs on the circuit, including last weekend.