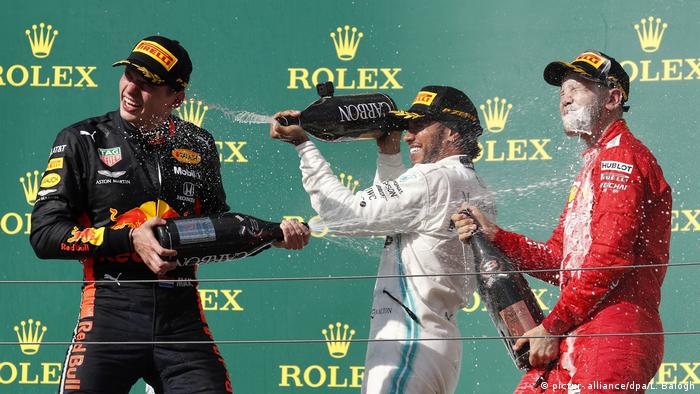 With 21 laps to go in the Hungarian Grand Prix, Lewis Hamilton caught everyone off guard by diving into the pit lane for a second time. The 34-year-old had been hot on the heels of Red Bull's Max Verstappen, defending pole position, but came out of the pits with the task of closing a 20-second gap.

While Hamilton questioned whether the decision to pit "was the right call" over the team radio, Verstappen was unequivocally told by his engineers that had they followed suit, he'd have come out behind Mercedes' main man.

By the time the checkered flag flew in Hungary though, the decision to switch to fresher, softer tires was vindicated as, with Verstappen tires fading, Hamilton took the lead with three laps remaining to claim his eighth win of the season.

During his seventh lap of honor in Hungary, Hamilton was quick to credit Mercedes' chief strategist James Vowles: "Thanks guys, I know the last one was hard and James sorry for doubting the calls on your strategy."

It was a humble moment from a driver of prodigious quality, who underlined his status as one of the greatest ever at the end of another thrilling comeback.

"I'm tired which is how it should be. I feel really grateful for the day and for the team for continuing to believe in me and push to the limits," Hamilton said. "We had brake problems all weekend and I was worried. We made some changes and it didn't make much different so I was actually doing a lot of lift and coast as much as possible.

"I honestly didn't know if I could catch the 19 second gap, the tires were dropping off and I kept pushing and pushing, they were like qualifying laps every lap. I think if Niki [Lauda] was here today he would take his hat off."

However, it's the record of another legendary German driver that Hamilton is still chasing. After clinching his 81st career win in Hungary, the 34-year-old is just 10 shy of equaling Michael Schumacher's record of 91. With only nine races left, it won't happen this season, but given the form of both driver and vehicle, it seems only a matter of time.

Race of the Century

Race it! The Race of the Century

Sunday's Chinese Grand Prix in Shanghai was the 1,000th race in Formula One history. Over the years the motor racing circuit has seen many big winners, bad accidents and charismatic personalities. (14.04.2019)