Syria enters 2019 with all signs pointing to it being reaccepted into the Arab fold. The diplomatic shift is a recognition that the war has been won and Arab states need to exert influence in a post-conflict Syria. 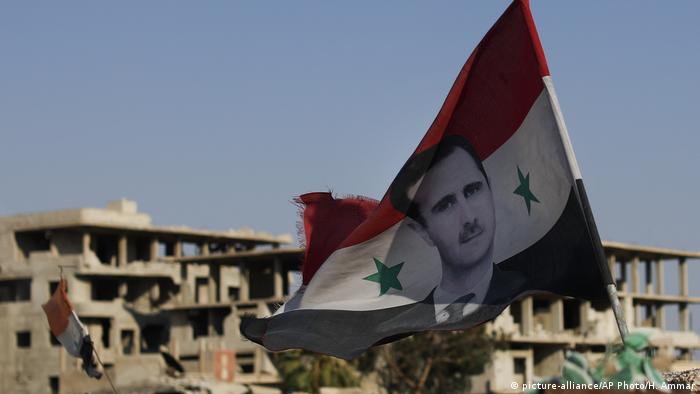 Nearly eight years into a devastating war and with victory in sight, Syrian President Bashar Assad looks set to be freed from his isolation in the Arab world in 2019.

Syria was booted out of the Arab League seven years ago as Arab states recalled their ambassadors, and Gulf Arab states shuttered their embassies to isolate the Assad regime amid a crackdown on protesters and descent into civil war.

Now Arab states are seeking to reconcile with Assad, who with the support of Russia, Iran and Hezbollah, controls more than two-thirds of the country following decisive battlefield victories against rebels and jihadis over the past three years.

Such a drive to bring Syria back into the Arab fold would be a major victory for the cash-strapped Assad regime, which faces Western sanctions and needs an estimated $400 billion (€350 billion) to reconstruct the war-torn country.

In the latest sign that Syria's diplomatic isolation in the region may be coming to an end, oil-rich Kuwait said on Monday that more Arab countries will reopen embassies in Damascus.

Kuwait's deputy foreign minister, Khaled Al-Jarallah, said that he predicted a "thaw in relations" between Syria and the oil-rich Gulf Arab states "in the coming days as more nations look to reopen their embassies in Damascus," according to state news agency KUNA.

Last Thursday, the United Arab Emirates (UAE) reopened its embassy, and the next day Bahrain said it planned to follow suit.

The UAE, which is a close ally of Saudi Arabia, said that the new situation requires an "Arab presence and communication" in Syria.

In an apparent reference to non-Arab Iran and Turkey, the UAE said there was a risk of regional interference in "Arab, Syrian affairs." 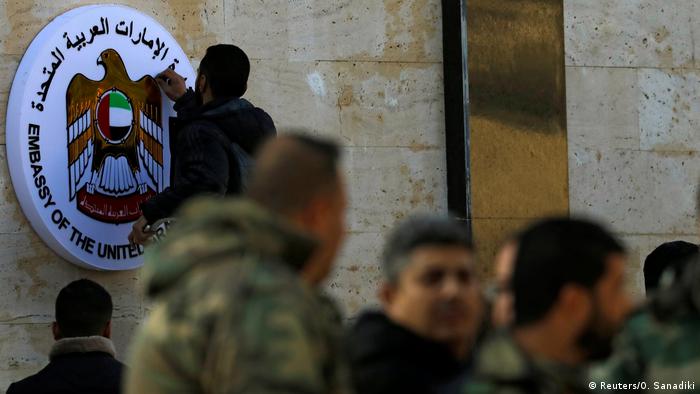 The Emirates opened their old embassy in Damascus on December 27

Tehran's backing has been crucial for the survival of the Assad regime. Turkey still backs rebel factions, but has given up on toppling Assad and largely used armed groups to counter Syrian Kurdish forces and carve out a buffer zone in northern Syria.

The Gulf Arab states, especially Qatar and Saudi Arabia, were the main regional financial and military backers of armed groups seeking to oust Assad, a policy often coordinated with the United States.

In 2017, the US halted its covert backing of rebels and last month announced some 2,000 US troops would withdraw from northeastern Syria, where they are backing a mixed Kurdish and Arab force battling the "Islamic State."

The planned withdrawal of US troops has upended the calculations of US-allied Gulf Arab states. It has also seen the Syrian Kurds, which control a quarter of the country, signaling they will pivot towards the regime to ward off a possible Turkish attack.

All eyes are now on Saudi Arabia, a rival of Iran whose role as the region's financial and military heavyweight could determine the course of the Arab world's rapprochement with Syria.

Jarallah said Kuwait's embassy in Damascus would remain closed and "only resume with the Arab League's consent." Syria's embassy in Kuwait, where a quarter of a million Syrians live, was never closed.

Meanwhile, Syrian intelligence chief Ali Mamluk visited Cairo for talks with officials in December, suggesting that re-establishing relations with Egypt could be on the table.

In another sign the Assad regime's isolation is coming to a close, Sudanese President Omar al-Bashir in December became the first Arab leader to visit Damascus since the start of the Syrian war. Trade between Syria and Jordan has also resumed in recent weeks after the reopening of a border crossing.

The UAE, Egypt, Bahrain and Sudan are close allies of Saudi Arabia, suggesting their contacts with the Assad regime were not opposed by Riyadh.

The momentum behind the Arab League moving to reinstate Syria comes as Iran is looking to cash in on its military support of Assad. The catch is that Iran's economy is weak and under the pressure of US sanctions, while the Gulf Arab states have deep pocket books for Syria's reconstruction.

Over seven years of war, Iran has become interlaced in the Syrian state and security apparatus, and now intends to play a role in the country's economy and reconstruction.

On Monday, Syria's economy minister said Iranian public and private companies would be given priority for the country's reconstruction as the two sides signed an economic cooperation agreement.

Iran will continue its "construction cooperation and advisory role" as long as the Syrian government requests, he said. Iran refers to its military support as advisory.

It is unclear when, or if, the Arab League may reinstate Syria. A meeting of the regional body's permanent representatives is to be held in Cairo on January 6. On January 19-20, the Arab Economic Summit will be held in Beirut and Syria's attendance is reportedly being negotiated.

The Beirut gathering could be a test for the Arab League summit scheduled for March in Tunis, Tunisia.

On December 27, Syria's only private airline, Sham Wings, made a direct flight from Damascus to Tunis, the first such flight since the war broke out.

The Syrian Observatory on Human Rights has said 20,000 people were killed this year in Syria's civil war. It's a record low in a conflict that has already claimed half a million lives — and that could flare up again. (31.12.2018)