Sudan's president has become the first Arab leader to visit Syria since the start of the civil war in 2011. Syria was expelled from the Arab League after the Assad regime violently clamped down on the opposition. 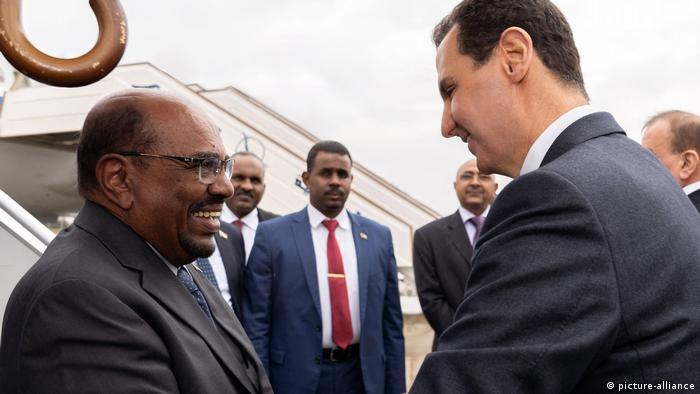 Sudanese President Omar al-Bashir was in Damascus on Sunday, marking the first time the leader of an Arab League nation has visited Syria since the civil war broke out nearly eight years ago.

Syria was expelled from the league in 2011, with the 22-member bloc criticizing President Bashar Assad for using military force instead of negotiating with the opposition.

While neither government has announced a specific purpose for the visit, some Arab League leaders, many of them sworn enemies of Assad ally Iran, have expressed interest in re-establishing ties with Syria as the war winds down in favor of Assad's troops.

In October, Assad told a little-known Kuwaiti newspaper that Syria had reached a "major understanding" with Arab states after years of hostility. He also said Arab and Western delegations had begun visiting Syria to prepare for the reopening of diplomatic missions.

According to Assad's office, the two presidents discussed the "situations and crises faced by many Arab countries" and the need for "new principles for inter-Arab relations based on the respect of the sovereignty of countries and non-interference in internal affairs."

Sudanese media reported that al-Bashir did not spend the night in Syria, returning to Khartoum immediately after the talks. The trip marked the first time a Sudanese president had been to Syria since a 2008 Arab League summit hosted by Damascus.

Syria's civil war has claimed over 360,000 lives and displaced millions.

Al-Bashir has been Sudan's leader since 1989, and he is wanted by the International Criminal Court on charges of genocide and war crimes in his own country. However, deportation under an ICC warrant is not a legal obligation and governments can decide whether or not they want to comply.

A game designer from Syria

The leader was responsible for the beheading of a US aid worker in Syria, said a US official. Even as the group suffers military defeat in Iraq and Syria, the UN has warned it still poses a threat to global security. (03.12.2018)

With the help of Interpol, 200 Sudanese officers have dismantled an operation that forced 85 minors into intensive labor. Interpol officials said the number of nationalities involved shows it's a "transnational problem." (10.09.2018)

President Omar al-Bashir has fired all 31 government ministers as he seeks a new, smaller cabinet amidst economic crisis. Inflation has reached an astronomical 65 percent. (10.09.2018)

A nighttime curfew was ordered in Blue Nile state after days of violence between the Berti and Hausa tribes. The military coup in October is blamed for a security vacuum that has reignited long-standing disputes.