Germany's far-right NPD party has called for a black Christian Democrat (CDU) politician to go home and urged its members in the eastern state of Thuringia to deliver this message to him personally. 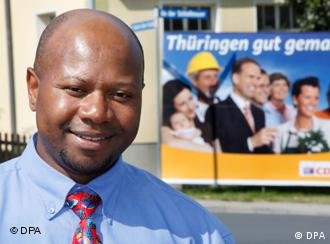 Schall is described as integration specialist for Chancellor Merkel's CDU

Zeca Schall, who is under police protection following the NPD statements reacted defiantly to the threats which were posted on the group's website on Tuesday, saying he considered himself to be a Thuringian.

According to the Christian Democrat's party spokesman for the state, Heiko Senebald, Schall said he would not be cowed by extremist threats and that he would continue to work on the regional election campaign.

The 45-year-old German currently appears in a local poster campaign ahead of state elections on Aug. 30. The NPD referred to Schall as a "ratings-nigger" and said of Schall, who has been in Germany since 1988, that as he was "no longer needed" he should "directly head home to Angola."

CDU members in the eastern state immediately rallied behind Schall, calling the right-wing abuse, "inhuman" and a "violation of human dignity." The party on Wednesday submitted a request for criminal charges to be pressed, saying the NPD's statements were an incitement to racial hatred.

Chair of politics and culture at Berlin's Free University Hajo Funke praised the CDU's direct and rapid response to the verbal abuse but said Thuringia is not doing enough to prevent the spread of right wing ideas.

"They are a latecomer in preventing right wing extremism," he said. "They are one of the least active states in eastern Germany and in Germany as a whole, so it's good that they are finally starting to do something."

According to Senebald, the CDU and Thuringia do enough to combat racism. Calling Thuringia an open and welcoming state, Senebald said the NPD was barely represented in the state and referred to programs aimed at preventing right-wing extremism. These range from the reintegration of former extremists into society as well as helplines for people wishing to leave the groups.

Germany's Office for the Protection of the Constitution said put membership of Thuringia's NPD party at just over 500 in 2008, around 80 less than in 2007. The agency also referred to the party's structure as weakened through political infighting.

The party's statements against Schall are likely to reignite debate over whether the NPD, which is described by Germany's domestic intelligence agency as racist, anti-Semitic and revisionist, should be banned. A ban would require a parliamentary majority. The last attempt to achieve a ban failed in 2003.

The NPD currently has around 7,000 members and holds seats in the state parliaments of Saxony and Mecklenburg-Western Pomerania.

NPD leaders on trial for racist campaign against soccer star