The European Council head has criticized the Law and Justice party-led government for repeatedly clashing with the EU. Donald Tusk also warned against the emergence of a nationalist front in the 2019 EU elections. 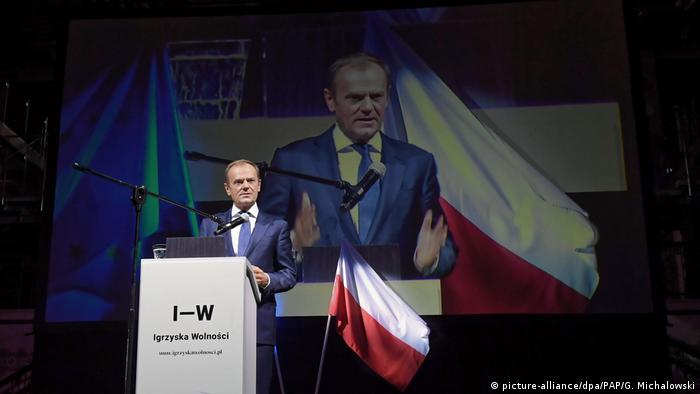 European Council President Donald Tusk has lashed out at Poland's ruling politicians, likening them to "contemporary Bolsheviks" who threaten the country's independence.

Tusk, seen as a likely contender in Poland's 2020 presidential election, was speaking in the city of Lodz on the eve of the 100th anniversary of Poland's independence after 123 years of being partitioned between Prussia, Russia and the Austro-Hungarian Empire.

The former Polish prime minister paid homage to Marshal Jozef Pilsudski, who led the victory over the Bolsheviks Red Army in 1920, and ex-Polish President Lech Walesa, who challenged Poland's Soviet-backed communist rule during the 1980s.

"Jozef Pilsudski was facing a more difficult situation than we have today when he was conquering the Bolsheviks and in fact, defending the Western community against political barbarians," Tusk said at a gathering of intellectuals and politicians on Saturday.

"Walesa had a more difficult situation when he was conquering the Bolsheviks in a symbolic way, when he was bringing out the European, the freedom, the national values in us. But he managed.

"Why shouldn't you be able to defeat the contemporary Bolsheviks?" Tusk said to great applause.

Tusk has denounced the euroskeptic government led by the conservative Law and Justice party as a threat to Poland. The Polish government has repeatedly clashed with the European Union over issues such as judicial reform, immigration and the environment.

"Whoever today in Poland takes steps against our strong position in a united Europe is really taking steps against Poland's independence," Tusk said.

Deputy Senate Speaker Adam Bielan hit back at Tusk, saying he was trying to divide Poles and provoke conflict on the eve of a big national holiday.

Security has been stepped up in Warsaw ahead of a joint march by the ruling party and far-right groups to celebrate the 100th anniversary of independence.

In an interview published Saturday by the Polish newspaper Gazeta Wyborcza, Tusk also warned against the emergence of a nationalist front in European Parliament elections in May.

"It cannot be ruled out that there will be two streams represented: one in the colors of the brownshirts, anti-European and focused on nationalism, and the second which wants to push as much as possible for EU integration," he said.

Tusk also spoke of rising anti-European sentiment in several capitals, saying some forces wanted "conflict rather than cooperation, disintegration rather than integration."

Is Poland's new government a PR stunt or an actual change?

EU President Donald Tusk has warned that Poland's PiS government could push the country out of the bloc if it stops being a net benefactor of EU funds. Relations between Brussels and Warsaw are at an all-time low. (10.01.2018)

Things can change quickly. In 2013, 70 percent of Germans described their country’s relationship with Poland as "good." Now that number is down to 31 percent. Why did it happen, and what are the current problems? (04.06.2018)