Donald Tusk has called on the UK to come up with its own plan to avoid a border in Ireland. Theresa May rejected the EU's draft offer and is set to announce her own proposal in Brussels. 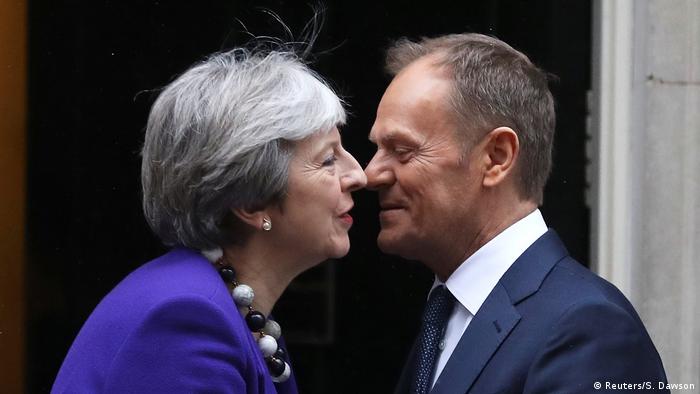 European Council President Donald Tusk challenged British Prime Minister Theresa May to present her own ideas on preventing a hard border between Ireland and Northern Ireland as the two leaders held talks in London on Thursday.

Following the meeting, an official for Tusk said he and May had "an open and honest debate in a good atmosphere about the real political difficulties ahead of us."

Their meeting at Downing Street came a day after May rejected a draft EU deal proposing that Northern Ireland remain in the EU customs union if the two sides fail to find a better solution. The prime minister reacted angrily to the proposal, saying she would refuse anything that undermined the UK's constitutional integrity.

Read more: UK waits to see how the post-Brexit winds will blow

"The PM said that the draft text put forward by the European Commission yesterday was unacceptable to the UK as it would, if implemented, undermine the UK common market and constitutional integrity of the UK," May's office said in a statement following her meeting with Tusk.

Red lines all around

May's government has so far ruled out remaining in the single market or creating a new customs union that would require the free movement peoples.

However, it has not said how it intends to avoid a hard border on the island of Ireland in order to protect the Good Friday agreement. The 1998 truce ended three decades of sectarian violence in Northern Ireland.

Tusk has criticized the UK's self-imposed "red lines" on the single market and customs union, warning that would shape the future relationship and make frictionless trade, as called for by British politicians, impossible.

"I want to stress one thing clearly: there can be no frictionless trade outside of the customs union and the single market," Tusk said ahead of the meeting. "Friction is an inevitable side effect of Brexit by nature."

May is set to announce on Friday her expectations for the UK's future relationship with the EU after it leaves on the bloc in 13 months' time. May briefed Tusk on the speech, with reports suggesting she will make the call for an "ambitious economic partnership."

Tusk will make a similar announcement on the EU's stance next week.

Warnings from the EU's chief negotiator, Michael Barnier, caused the pound to sink to a seven-week low against the dollar.

Barnier told reporters on Thursday that the only option open to the UK was a free trade deal, similar to the ones the EU recently signed with Canada and Japan.

"The UK is closing the door on itself one by one and the only possible model which remains is that of the free trade agreement, as we did recently with Canada, Japan or Korea," Barnier said in Brussels.

The former French minister for foreign affairs also warned that there was no guarantee for a  21-month transition deal — an agreement designed to give London and Brussels more time to finalize the results of Brexit. According to the reports, the announcement rattled investors and sparked a sell-off of the pound.