EU negotiator Michel Barnier has revealed the bloc's first draft of the Brexit withdrawal treaty, emphasizing there were "no surprises." Barnier's speech focused on border issues between the UK and Ireland. 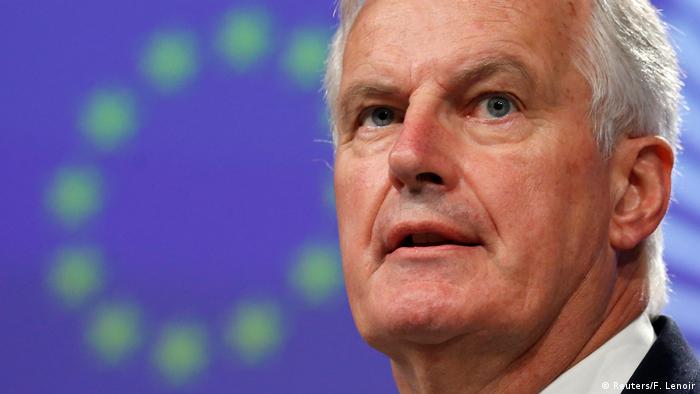 European Union Brexit negotiator Michel Barnier said the UK must speed up talks if it wants to withdraw from the EU by March of next year.

"If we wish to make a success of these negotiations ... we must pick up the pace," Barnier said as he revealed the draft Brexit divorce treaty on Wednesday.

He repeated that there were "no surprises" in the 120-page draft that contains 168 paragraphs.

The arrangements of the draft treaty are overseen by a joint EU-UK committee, but the European Court of Justice remains as the ultimate authority to resolve disputes.

Read more: Opinion: Brexit – that was the easy part

The draft treaty was based on interim agreements reached in December and on EU positions that Britain has yet to accept.

'Not trying to make any shockwaves'

In particular, a protocol on how to avoid a "hard border" between the Republic of Ireland and Northern Ireland would effectively keep the northern neighbor within the EU structures and rules, such as the bloc's single market and customs union.

Read more: Opinion: The EU budget is about more than money

The draft states that the plan would only come into effect if no other solution to the border issue could be found. In such a case, "a common regulatory area comprising the Union and the United Kingdom in respect of Northern Ireland" would be set up to ensure the free movement of goods.

Barnier: 'I'm not trying to provoke'

Ireland and the EU have called for any Brexit agreement to avoid a hard border — including customs checks — to protect the 1998 Good Friday peace agreement with Northern Ireland.

Read more: How a hard Brexit could hurt Germany: Reckoning with the worst that may befall

Following a number of questions from reporters about the delicate political situation between the UK and Ireland, Barnier said he was "not trying to make any shockwaves" or provoke anyone.

"We've got 43 years of integration between the UK and EU to unravel here," Barnier said. "We have more than 700 international agreements which the UK will be leaving because they wanted that."

'No UK prime minister could agree to it'

Following the presentation on Wednesday, Prime Minister Theresa May said an Irish border after Brexit would "undermine the constitutional integrity of the UK" and was unacceptable to Britain.

May said the plan would "undermine the UK common market" by essentially putting a border between Northern Ireland and the rest of the UK. "No UK prime minister could ever agree to it," May said.

May said Britain would work with the EU on alternative proposals and remains "absolutely committed" to avoiding a hard border. The British prime minister is due to make a Brexit speech on Friday, where it is expected she will outline future relationship she wants with the European Union.

Ireland welcomed the EU's first draft of the Brexit agreement, but was prepared to discuss other options once Britain provided alternatives to how trade and travel can be kept smooth across the Northern Ireland border.

The EU draft contains "the necessary legal provision to implement the backstop" that would avoid a hard border between the UK and the EU member state, the Irish government said.

"It's not okay for people, whether pro-Brexit politicians in Britain or parties in Northern Ireland, to just say 'no' now. It's incumbent on them, if they can't accept the backstop, well then they must detail how Option A or B would work," Irish Prime Minister Leo Varadkar told Ireland's Newstalk radio station.

EU negotiator Michel Barnier reminded the UK that details on its post-Brexit strategy were still sketchy. He warned that a transition deal was by no means certain due to "substantial disagreements." (09.02.2018)

The two countries have moved to prevent the UK government from launching a power grab when Britain leaves the European Union. New legislation will be introduced to repatriate EU laws on fishing and farming if required. (28.02.2018)

UK Prime Minister Theresa May has called for a security treaty between the EU and Britain "to protect all EU citizens." European Commission chief Jean-Claude Juncker said security ties between the two will be upheld. (17.02.2018)

British Prime Minister Theresa May: 'Europe's security is our security'