EU chief negotiator Michel Barnier has said Britain must decide whether to stay in the bloc's customs union ahead of talks later this week. British PM Theresa May earlier ruled out remaining in the customs union. 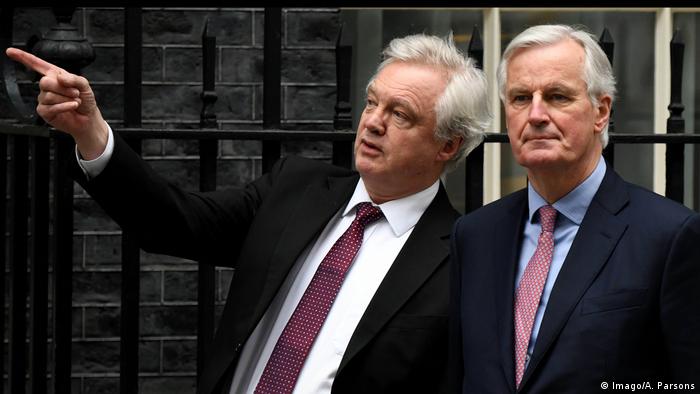 Barnier's comments come after British Prime Minister Theresa May ruled out Britain's membership of the EU customs union after it leaves the bloc and ahead of the first formal negotiations on a final deal starting Tuesday.

- Barnier said: "Without a customs union ... barriers to trade and goods and services are unavoidable ... Time has come to make a choice." He told British broadcaster Sky News ahead of his arrival in London: "My feeling is that we have not a minute to lose because we want to achieve a deal."

- Speaking alongside Barnier, Davis said Britain was clear on what it wanted, including a customs agreement with the EU that would make trade as "frictionless as possible," while allowing Britain to negotiate new trade deals with non-EU countries.

- Tom Brake, the opposition Liberal Democrats' Brexit spokesman, said on Twitter that May's announcement "confirms the crazed, extreme Brexiters are now in control of the government."

- David Cullinane, Brexit spokesman for Irish Republican party Sinn Fein, said: "There will be a border if the hard Brexiteers get their way and Britain leaves the customs union."

What is the EU customs union? It is an arrangement allows goods to travel tariff-free between customs union members, which includes all EU member states plus partial members Turkey, Andorra and San Marino. Goods entering member countries from a non-members must pay a union-wide tariff.

Can Britain remain in the EU customs union after Brexit? Barnier has repeatedly said Britain can only remain in the EU customs union if it abides to the bloc's rules, including paying membership fees, accepting no limits on EU migration into Britain, and renouncing any right to negotiate trade deals with non-EU countries. Brexiteers have however rejected those conditions.

What would leaving the customs union mean for Britain? It would allow Britain to negotiate third-country trade deals, which many pro-Brexit ministers have said they support. But the move could raise tariffs on British-EU trade and force Britain to enact border checks between Northern Ireland, a British territory, and the Republic of Ireland, an EU member state. British politicians in favor of a softer Brexit fear the economic and political disruption that would result and have called for Britain to either remain in the customs union or seek an arrangement that mimics it.

Read more: Brexit Diaries 24: An elephant in the room

The customs union debate is set to be a key discussion topic when British and EU negotiating teams meet for the first time on Tuesday since the EU gave the go-ahead in December to move talks onto the details of a final deal.

The 499-kilometer Irish border wasn't originally intended to be an international frontier. Since the Republic of Ireland was created, the situation at the border has mirrored the changing nature of Anglo-Irish relations. (03.12.2017)