Britain intends to sign trade deals while part of the EU customs union during a transition period, according to David Davis. The EU will discuss guidelines for an expected two-year Brexit transition next week. 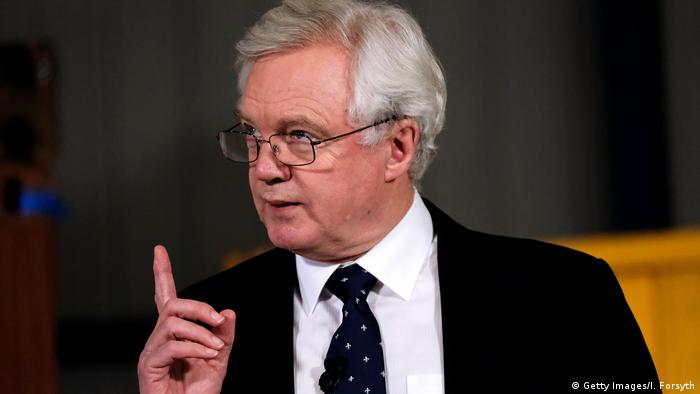 The UK's so-called "Brexit Minister" David Davis has said the UK should be permitted to negotiate and sign trade deals during a transition period following its exit from the European Union.

The UK is set to leave the EU in March 2019, followed by what is expected to be a two year transition period to create a smooth divorce after more than years in the bloc.

Read more: UK to abide by EU rules during transition, with no voice

Britain would remain part of the EU customs union during the transition period, during which talks on the UK's trade relationship with the bloc are to be negotiated.

"Of course maintaining access to each other's markets on current terms means we will replicate the effects of the EU customs union during the implementation period," Davis said in a speech on Friday. "But participating in a customs union should not preclude us from formally negotiating — or indeed signing — trade agreements," he said, adding that any such trade deals would then enter into force at the end of the transition period.

The guidelines of the transition are to be discussed by the other 27 EU member states in Brussels next week.

Davis also said he would discuss with the EU how regulators can provide a smooth transition for companies.

"We must discuss how regulators and agencies can best provide continuity and clarity during this period in a way that benefits everyone," he said. "We should approach the implementation period as the bridge to this new relationship. That means each side committing to not taking any action that undermines the other."

Divisions within the Tories

Prime Minister Theresa May is struggling to balance the desires of hardline "Brexiteers," agnostics, and pro-EU parliamentarians within her own party. She's also walking the tightrope of so far laying foundations for a rather gentle Brexit, broadly in the mold envisaged by Brussels, while being feted in the partisan British tabloids as the hardened negotiator winning back British sovereignty.

On Thursday, Chancellor of the Exchequer Philip Hammond — perhaps the cabinet's strongest opponent of Brexit — caused a stir within the conservative ranks. The finance minister told global elites in Davos that the EU trade talks involved "taking two completely interconnected and aligned economies with high levels of trade between them, and selectively moving them, hopefully very modestly, apart."

The term "very modestly" didn't go over well with the hardline pro-Brexit camp, leading to a response from May's office.

"While we want a deep and special economic partnership with the EU after we leave, these could not be described as very modest changes," Downing Street said on Thursday.

Rumors of a potential leadership challenge from within the Conservatives have hounded May ever since she became prime minister after the 2016 Brexit referendum. Even 2017's snap election ended up doing little to quell them, as the Tories lost ground rather than gaining seats as expected. Speculation of her being toppled from within has resurfaced in recent weeks, with bookmakers currently favoring a backbench MP and proto-Brexiteer, Jacob Rees-Mogg, as a successor in the event that May falls.

Hammond later attempted to clarify his remarks, saying Britain would be leaving the EU's customs union and single market.

"It's a fact our economies are integrated, that's the baseline from which we leave the single market and customs union – which clearly represents change," he said on Twitter.

Davis said on Friday that there was no difference between himself, Hammond and May on Brexit.

British PM Theresa May struggles on amid Brexit uncertainty

Despite plunging approval ratings and calls from prominent quarters for a second EU referendum, Theresa May appears to be safe in her job for the time being. Samira Shackle reports from London. (08.01.2018)

Jean-Claude Juncker and Donald Tusk say the door remains open for the United Kingdom to change course on leaving the EU. Talks of a second Brexit referendum have been quashed by Prime Minister Theresa May's office. (16.01.2018)

The UK heads into an uncertain 2017, with the shadow of Brexit looming over the nation. With so many unknowns is Britain hoping for the best or resigned to the worst? Cristina Burack reports from London. (02.01.2017)