EU chief negotiator Michel Barnier has warned that Brexit should not be used to create more bureaucracy. He was reacting to the British government's white paper on future relations with the bloc. 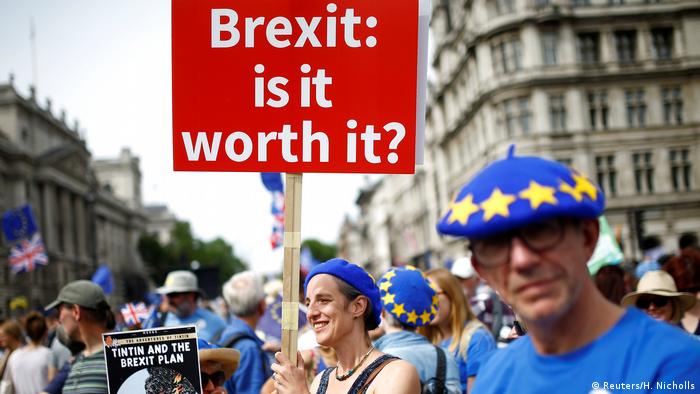 The British government's blueprint for its trading relations with the EU after it has left the bloc contains "useful" elements, but many questions remain, EU chief Brexit negotiator Michel Barnier said on Friday.

"From our point of view there are ... several elements that open the way for a constructive discussion," he said, including plans for a free trade deal, a commitment to common standards and guarantees on fundamental rights.

But Barnier hinted that some of the proposals contained in a white paper published last week may be unworkable and questioned whether they were compatible with the EU's basic principles, or in the bloc's interest.

'UK well-advised to focus on trade with EU'

'UK well-advised to focus on future trade with EU'

"There are some points that are in contradiction with the guidelines" of the remaining 27 EU leaders, Barnier told reporters, citing the integrity of the EU's single market and the indivisibility of its four freedoms – free movement of goods, services, capital and persons.

Britain has indicated that will seek single market privileges for industrial and agricultural goods alone, while aiming for a much looser arrangement for the trade in services.

Barnier, meanwhile, questioned whether the proposals would create more red tape — ironic in view of the fact that  one of the major arguments cited for leaving the bloc during Britain's June 2016 referendum on EU membership was too much bureaucracy in Brussels.

"I would simply say that Brexit cannot be and will not be a justification for creating more bureaucracy," he said

Barnier, who met new UK Brexit minister Dominic Raab on Thursday, also restated that 80 percent of the withdrawal agreement was already in place, but that there was still no settlement on how to avoid a hard Irish border between the Republic of Ireland, which is an EU member, and the British territory of Northern Ireland.

"This requires a legally operative backstop, an all-weather insurance policy ... All 27 member states insist on this," he said, adding that British negotiators had been invited to work on the Irish border issue next week.

Read more: Theresa May says Donald Trump advised her to 'sue the EU' over Brexit

British Prime Minister Theresa May said in a speech in Northern Ireland's capital, Belfast, on Friday that she accepted that a hard Irish border was "almost inconceivable," but dismissed the EU's current backstop plan — to treat Northern Ireland as a separate customs area to the rest of the United Kingdom — as "unworkable"..

EU Europe ministers also met on Friday to discuss Britain's White Paper but were not expected to make an immediate joint statement on the proposals.

"When you make a proposal limited to agricultural products and goods, you have to ask what about services, what about capital, what about the free movement of people. Those questions will have to be answered in the coming days and weeks," he said.

Luxembourg Foreign Minister Jean Asselborn said: "There are rules, and these rules must be abided by. We should not play with this. At stake are tens of thousands of jobs, or more. And in a sense it is about stability in Europe," he added.

Britain is set to leave the EU on March 30, but an October deadline to finalize the details of the country's withdrawal and a transition period loom.

Brexit is causing much anxiety within the business community, as companies prepare for the possibility that Britain will fail to secure a deal, an outcome that has the potential to cause widespread chaos.

Business and political leaders have been frustrated at the slow pace of talks and extent of political discord in Britain, including the rebellion against May over her blueprint, which saw protest resignations from her foreign secretary, Boris Johnson, and Brexit secretary David Davis.

On Thursday, The European Commission, the EU's executive arm, published a document on Thursday urging the remaining 27 member states and businesses to "step up preparations" for all outcomes, including the lack of a deal. It warned of disruptions, including to business supply chains.

One of the UK's oldest banks is following the trend to relocate operations across several European locations after Brexit. It is no longer a choice between Frankfurt, Paris or Dublin that bankers in London are mulling. (17.07.2018)