Prime Minister Theresa May has united her Cabinet around a Brexit proposal that would see Britain keep some benefits of EU membership outside of the bloc. Whether the EU is prepared to agree with the proposal is unclear. 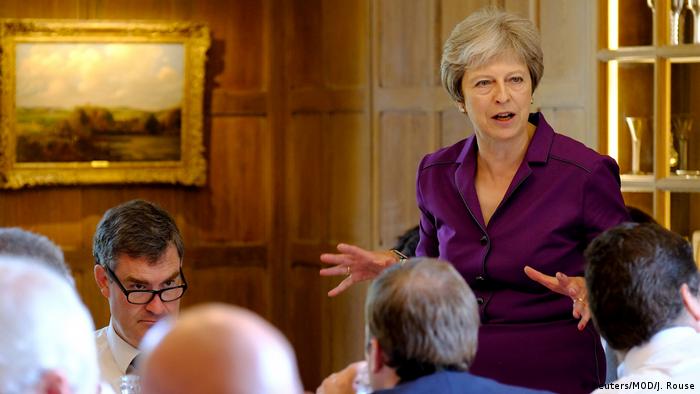 British Prime Minister Theresa May has obtained her Cabinet's agreement for a proposal that would see Britain strive for a free trade deal in goods with the European Union after it leaves the bloc in March 2019.

Ministers discussed the proposal for hours at the prime minister's Chequers country residence outside London as May tried to unite her bitterly divided Cabinet on a vision for Britain's post-Brexit economic relationship with the EU.

"This is a proposal that I believe will be good for the UK and good for the EU and I look forward to it being received positively," May told reporters late Friday.

The proposal would withdraw Britain from most parts of the EU's single market and customs union for goods and services, removing the UK from the EU's legal jurisdiction, allowing it to strike new trade deals with third countries and ending unfettered free movement of people from the continent to Britain.

Hard-line Brexiteers within May's Conservative Party have long called for a complete break with the bloc to give Britain more independence over its trade and immigration policies.

But the deal also appears designed to placate some pro-EU elements within her party who want Britain to maintain a close economic relationship with the bloc, as well as British and EU businesses that want frictionless trade post-Brexit.

According to the proposal, both sides would strike a fresh deal to replace Britain's membership in the EU single market and customs union with a deal on tariff-free trade in goods and agricultural products and a British commitment to ensure British goods are made to EU standards.

Goods entering Britain but bound for the EU would also enter freely, according to the proposal, via the use of new border technology to calculate and apply potential differences in tariff and trade rules.

That arrangement, May hopes, should also meet EU demands against the reintroduction of customs and border checks between Northern Ireland, a British territory, and the Republic of Ireland, an EU member state.

The proposed deal would, however, omit services trade, the lion's share of the British economy, to ensure Britain regained "regulatory flexibility" after its departure.

EU is not a 'supermarket'

Despite securing a domestic win, May could face stiff opposition to her proposal from the European Union.

EU chief Brexit negotiator Michel Barnier wrote on Twitter that he would assess whether the proposal was "workable and realistic." Hours earlier, he told reporters the EU would not allow Britain to approach the bloc like a "big supermarket."

EU officials have repeatedly warned London against "cherry-picking" — demanding beneficial access to some parts of the European Union while dismissing certain obligations it views less favorably — for fear that other countries could follow Britain out of the 28-country bloc.

The British proposal appeared to acknowledge EU misgivings by warning that the government would speed up preparations for a "no-deal" exit.

London's "lack of realism" on Brexit is holding up divorce talks with the EU, Scotland's First Minister Nicola Sturgeon told DW. She also dismissed claims she was "weaponizing" Brexit to push Scottish independence. (26.06.2018)

Investment in Britain's car sector collapsed by almost a half in the first six months of the year, industry figures have shown. New projects are being hindered by Brexit-related uncertainties for carmakers. (26.06.2018)

These days, the Northern Ireland peace process and free trade mean you'd hardly notice that there was a border separating two parts of the Emerald Isle. Brexit could make things complicated once again. (04.12.2017)