Estrack, a network of ground stations run by ESA, is tracking China's lunar "sample return" spacecraft. It aims to bring moon rock back to Earth by mid-December. It could be a step towards more regular moon flights. 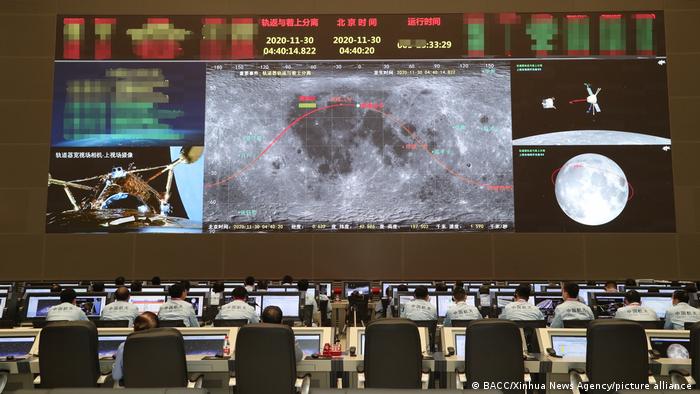 China is positioning itself as a formidable force in lunar exploration.

Last year, it became the first spacefaring nation to land a spacecraft, Chang'e 4, on the far side of the moon.  And now it's successfully landed a new lunar spacecraft,  with the aim of bringing rock and soil, known as regolith, back to Earth in about two weeks (December 15-17, 2020). Chang'e 5, a robotic lunar probe, launched on November 23.

It's landed on the near side of the moon, in a region to the north of Mons Ruemker, a mountain overlooking Oceanus Procellarum — the "Ocean of Storms"  — and China's space agency says the probe has already started gathering rocks and soil.

The China National Space Administration (CNSA)  says Chang'e 5 "will bring about 2 kilograms [4.4 pounds] of lunar samples back to Earth in mid-December, 44 years after the last substances from the moon were returned to Earth." That was on a Soviet mission called Luna 24.

First, they are a test of technology and engineering — our ability to land on a moon or planet, such as Mars, and return to Earth. Second, we're still trying to work out why and how our solar system formed the way it did.

Europe is keen to work with China on robotic missions  and human spaceflight.

"We're now in the most critical phase of the mission," says Pier Bargellini, who heads ESA's Ground Facilities Operations Division.

Once the samples have been collected, a return vehicle will launch from the lunar surface and then perform an automatic docking with an orbiting vehicle before it all returns to Earth. 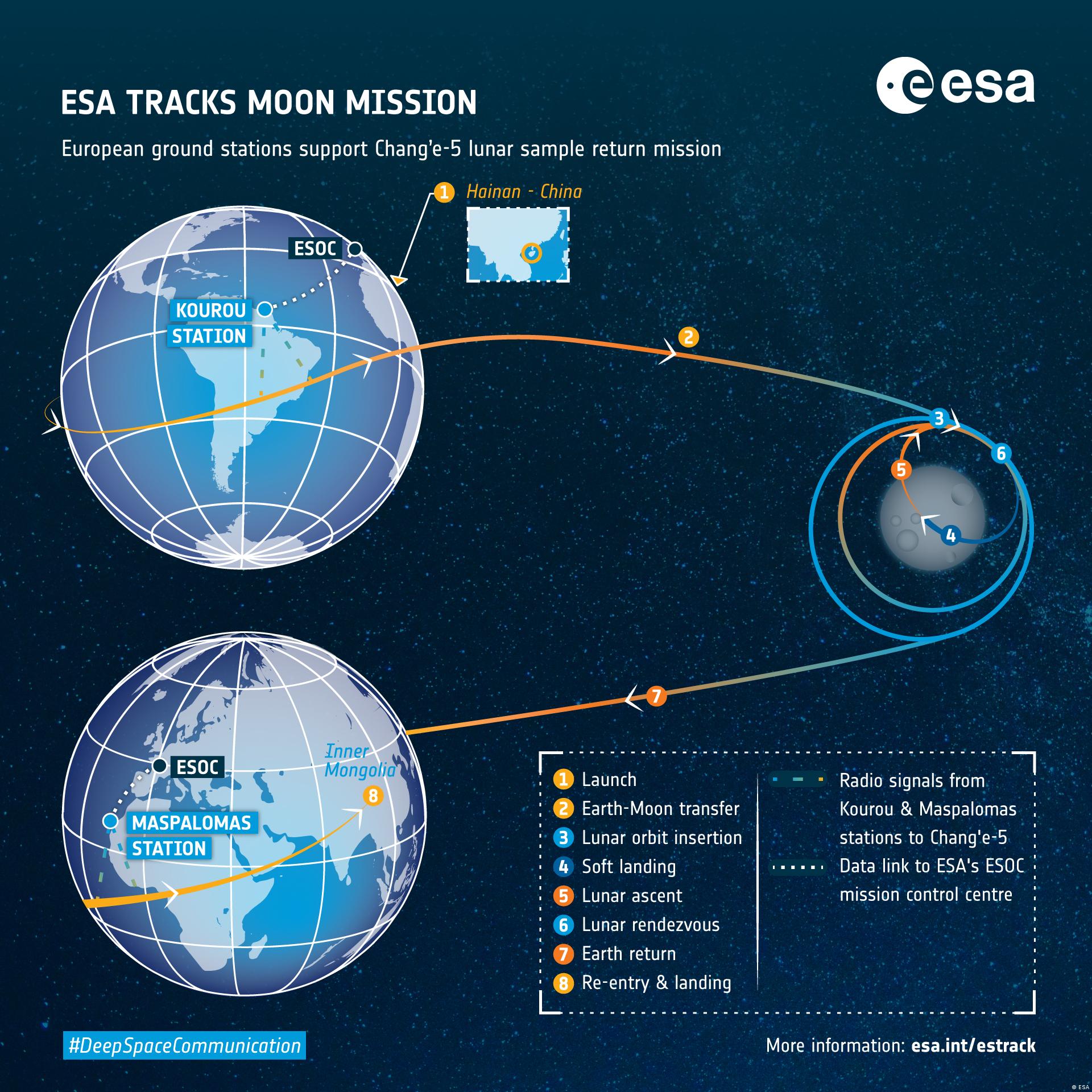 "And we're supporting this phase with a large antenna we have in Malargüe, Argentina," says Bargellini. "The Chinese have their own antenna in Argentina, so we're providing back up, so we don't lose any data if there are problems."

That's important to ensure all those critical steps are performed as planned. After that, a Spanish antenna at Maspalomas in the Canary Islands will track the sample return vehicle as it reenters Earth to land north of China's Inner Mongolia.

"You want to track the return vehicle as much as you can to know its trajectory exactly and ensure it reenters at the right place," says Bargellini.

ESA has supported a number of China's Chang'e missions. But Chang'e 5 is, by CNSA own admission,  China's "most complex space mission ever."

Why study lunar rock and soil?

The moon and planet Earth are "intimately" linked, says Urs Mall, a researcher at the Max Planck Institute for Solar System Research. Mall says they are in a "double system." Some even say that the moon is "Earth's daughter."

And the two together, say scientists, have got to have some bearing on our understanding of our solar system as a whole.

"Take tectonics, for instance," says Mall. "Tectonics shaped Earth, we've known that [for a while], but we're now seeing tectonics on the moon. We need to understand why it's so strong on some planets and not so strong on others."

Rocks and soil, meanwhile, are a good source of information about the formation of planets and moons. We've learnt a lot since the American Apollo sample return missions  of the late 1960s and early 70s and the Soviet Luna missions.

The moon "not so dead after all"

"During the Apollo and Luna eras, it was more of a political question whether you brought samples home, and we asked some fundamental questions, like 'How old is the moon?'" says Mall. "But we need to know much more about the moon's entire composition, why the near side is so different from the far side."

We've also learnt since Apollo and Luna that there's been volcanism on the moon, "so, the moon is not as dead as it looked originally."

It's also important to land at sites that haven't been investigated before, says Mall. The Soviet Luna missions, for instance, were all in a "relatively small area." 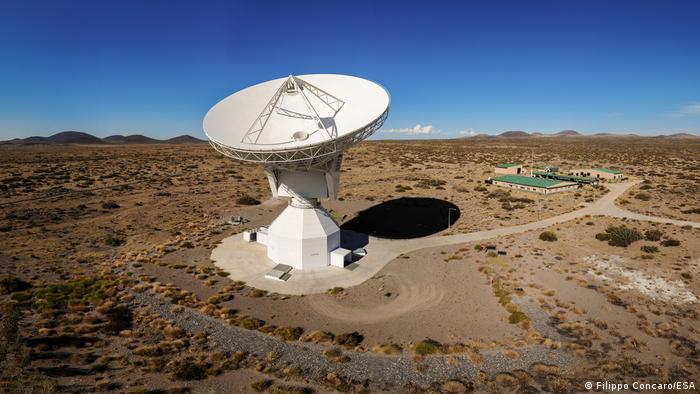 No one does space alone: Estrack is a global network of tracking stations that supports international missions

The Chinese are now going back to the moon to do what others didn't do before.

"Absolutely," says Mall. In fact, Chang'e 5 is now doing what Europe could have done a long time ago, he says. "There have been long discussions in Europe, but it's been extremely difficult to convince people to go back."

But perhaps it's not too late. ESA is keen to learn from the Chinese, and its collaboration on the Chang'e missions is a way for Europe to do that.

"Europe is now active in trying to have missions to the moon — the moon is the focus of exploration for ESA, the Americans and many others," says Bargellini. "So, we are learning a lot about tracking spacecraft around the moon."

They also hope to learn from China's automatic docking technology for a joint European and American sample return mission to Mars.

The moon faces stiff competition from Mars. China's got its Mars missions as well. There is that European-American mission mentioned above, and Japanese plans for returning rocks and soil  from a Martian moon.

About 10 or 15 years ago, says Bargellini, there was a debate in the space community about whether to focus on the moon or Mars, and where to invest.

"Things have changed a lot in the past five years, because the moon is not just an interest to space agencies but now we also have several companies interested in services for the moon," Bargellini says. "And ESA and NASA are both trying to get companies to invest in infrastructure for communication  with landers and orbiters around the moon."

Practicing for the moon

Plus, the moon is less technologically complex to reach, says Bargellini.

So, the moon is a great testing ground for missions farther afield. "Whatever we learn on the moon missions will be beneficial for the future of Mars exploration," he say.

And on that score, it looks like China has just taken a lead on the rest of the pack.

"There's no question that the Chinese are able, they have shown before that they can land on the moon, and they are showing us they can collect samples and hopefully bring them back to Earth," says Mall. "Now, it's time for them to show that they can collaborate scientifically with the whole world."