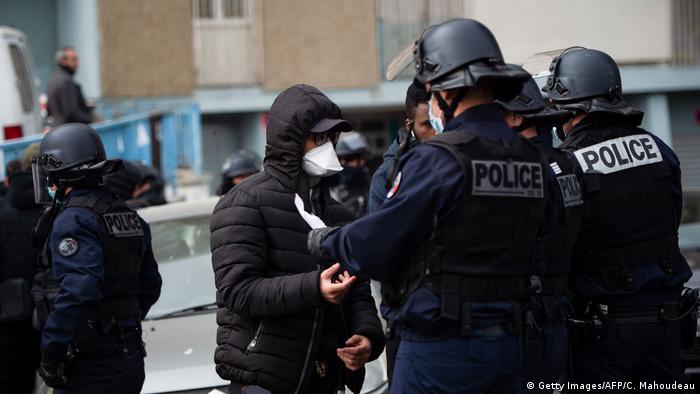 Police forces across Europe were marred by systemic racism when implementing coronavirus lockdown measures, Amnesty International said in a report published on Wednesday.

The investigation revealed "a disturbing pattern of racial bias which is linked to concerns about institutional racism within police forces, and echoes wider concerns raised in the ongoing Black Lives Matter protests."

The death of George Floyd on May 25 while in police custody in Minneapolis sparked protests around the world and "highlighted the pervasiveness of discriminatory policing and impunity in Europe as well," the report added.

The enforcement of lockdowns meant poorer communities were more likely to suffer greater crackdowns, according to Amnesty, and these zones often have a higher proportion of people from ethnic minorities.

In Seine-Saint-Denis, the poorest area of mainland France where the majority of inhabitants are Black or of North African origin, the number of fines handed out for breaching lockdown measures was three times higher than in the rest of the country, Amnesty said. Furthermore, poorer areas were often subjected to longer overnight curfews.

In the UK, police in London registered a 22% rise in stop and searches between March and April of this year. During that same period the proportion of Black people who were searched increased by almost a third.

Meanwhile, discrimination against Roma minorities in Bulgaria and Slovakia was evident during lockdown, the report said. Governments from both countries brought in mandatory quarantines on Roma settlements, for example.

In Slovakia they also tasked the military with enforcing quarantines while Amnesty considers that this option "is not suitable to carry out public health measures."

During mandatory quarantines in Bulgaria, over 50,000 Roma citizens were cut off from the rest of the country and suffered severe food shortages, according to Amnesty's investigations.

Qatar is one of the world's richest countries, but around 100 laborers from Southeast Asia and Africa working on a prestigious stadium project have not been paid in seven months, Amnesty International claims. (11.06.2020)

Schools and clinics in northwestern Syria were targeted in 18 attacks between April last year and February, according to Amnesty International. The rights group accuses Syria's regime and Russian forces of "war crimes." (11.05.2020)