European Parliament to vote on controversial copyright reform | Europe | News and current affairs from around the continent | DW | 26.03.2019

Will the reform of European Union copyright law herald the downfall of the digital era as we know it, or is it merely a matter of compensating artists? The European Parliament is set to vote on the landmark dispute. 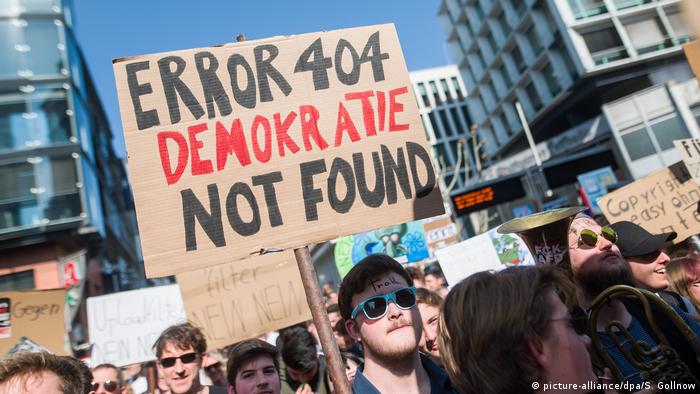 The campaign platform Change.org claims to have collected over 5 million signatures protesting European Union copyright reform. The figures, however, cannot be independently checked — it's impossible to track exactly who is voting.

It could be people making those clicks — but it could also be computers. One thing is for sure: the campaign's initiators want the high number of signatures to make an impression on lawmakers in the European Parliament, where a vote will be held Tuesday regarding a fundamental reform to digital copyright law.

The regulation causing particular concern first appeared in Article 13 and is now in Article 17. The laws pertain that in the future, online platforms would have to detect and filter out videos and music that would be deemed illegal according to copyright law.

Critics say that in order to detect the copyright-protected content, platforms such as YouTube would most likely utilize automatic "upload filters" which can have a relatively high error rate. These filters are not compulsory — in fact, they are not even mentioned in the legislative text — but they are likely the only practical method of processing huge amounts of data. Internet policy experts and activists argue that this could also hinder the uploading of legal content.

Fears of an 'upload filter'

Some opponents of the controversial regulation even claim that it would mean the end of the internet as it currently exists. To MEP Axel Voss, of Germany's conservative Christian Democratic Union (CDU) — Chancellor Angela Merkel's party — this all seems like a gross exaggeration. Voss is the rapporteur who set out the copyright reform proposed by the European Commission to the European Parliament. He has defended the draft bill in numerous interviews, stating that its intention is not to curtail freedom of opinion. 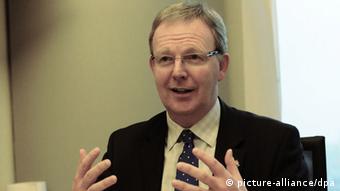 Voss says the reform won't amount to an 'upload filter'

Quotations, satire and even reputedly memes, he says, will still exist. The goal of the reform is not to introduce an "upload filter," Voss told German radio Deutschlandfunk Nova, but rather to ensure that artists whose works are being used are fairly compensated: "The aim is to tell the platforms: You can use your business model, but you have to reimburse fairly too." Flat rate payments through the platforms are also a possibility, he said.

The battle over Article 13 has already taken a bizarre turn in Germany. Last weekend, there were demonstrations in 40 cities. CDU MEP Daniel Caspary speculated that the demonstrators were backed by lobbying firms, who in turn are being steered by big US internet companies — a claim that sparked a backlash on social media.

Germany's center-left Social Democratic Party (SPD) has sided with the demonstrators and is set to oppose the copyright reform on Tuesday in the Strasbourg plenary session despite having initially given it their approval in negotiations that go back to 2016. Even the SPD's lead candidate for the European Parliament elections in May, Katarina Barley, is now against "upload filter." As minister of justice, Barley approved the copyright reform in the Council of the European Union after protracted negotiations with the European Parliament and the European Commission. And that was only a few weeks ago. The copyright reform prompted protests over the weekend

Will the reform be delayed?

Is landmark legislation on the horizon for the EU? If the majority of MEPs vote against the copyright reform, it would be the first time that the Parliamentary plenary rejects a bill which was approved by the responsible Commission.

Even the proponents of the copyright reform concede that this would be an extraordinary success for the activists' campaign. However, its supporters have also warned that this would mean no reform at all before the European Parliament elections in May. Those who hold rights to creative works would continue to be left out in the cold if users are utilizing their works without permission.

The European Court of Justice has long been calling for copyright law to be modernized in line with the digital era and has condemned the mindless copying of copyright-protected material.