The vote is the final step toward ratifying the EU-UK agreement and marks the last chapter of the Brexit saga that began almost five years ago. Relations between Brussels and London have already begun to sour. 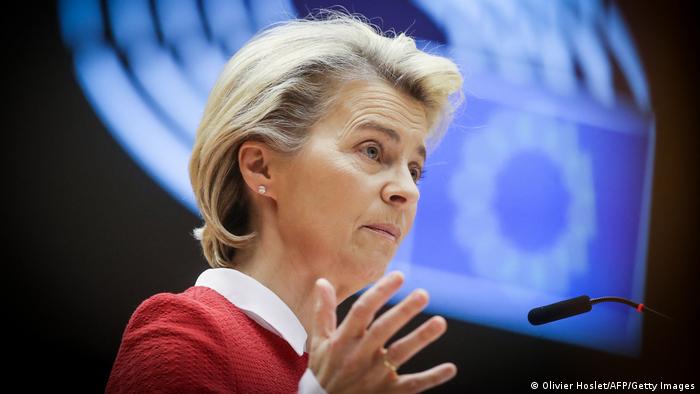 The European Parliament was set to hold a vote on a post-Brexit trade deal between the EU and the UK on Tuesday.

The parliament is expected to ratify the pact, which has been provisionally in effect since the beginning of the year pending the EU's final confirmation. The final Brexit seal has been accompanied by bitter warnings from some European quarters.

The Trade and Cooperation Agreement (TCA) was the result of nine long months of negotiations and set up a relationship of zero tariffs and zero quotas on goods traded between the EU and UK.

What does the EU think of the deal?

A lack of agreement over joint health, environment and other regulations has muddied attempts to avoid a hard border between Northern Ireland and the Republic of Ireland.

EU Commission chief Ursula von der Leyen took an optimistic view during Tuesday's parliamentary session, saying that although the EU is facing "a lot of vigilance, diligence and hard work," the vote is not just an end, "it is also the beginning of a new chapter."

Relations have also soured between London and Brussels following a row over the supply of AstraZeneca COVID-19 vaccine doses.

What has been the impact of Brexit so far?

Trade between the two sides has plummeted since the break came into effect on January 1, with EU imports from the UK down almost 50% and exports to the UK down 20% during the first two months.

"Brexit is a historic mistake. It was pushed through by irresponsible nationalism, based on false promises and shortsightedness," said Austrian MEP Andreas Schieder, who helped prepare the vote.

What is the dispute over the border in Ireland?

The EU also launched a legal dispute against the UK after Westminster unilaterally extended a grace period for not conducting checks on goods being transported between Northern Ireland and the rest of the UK.

The two sides have yet to find common ground on how to implement the so-called Northern Ireland protocol which aims to protect the single market while avoiding a hard border with EU member Ireland.

"This deal is not good because Brexit is not good. The situation is also complicated because we cannot be sure how trustworthy the UK government really is," said Terry Reintke, the vice-president of the Greens/EFA group in the European Parliament.

"Still, this agreement can be a starting point reconstructing what we lost due to Brexit," she said.

The European Parliament will vote on Tuesday evening, after several hours of debate, and the result will be announced on Wednesday.