The German statistics office said exports from Germany to the UK fell by almost a third in January, pointing to Brexit and the coronavirus pandemic as key drivers of the biggest slump since the 2009 financial crisis. 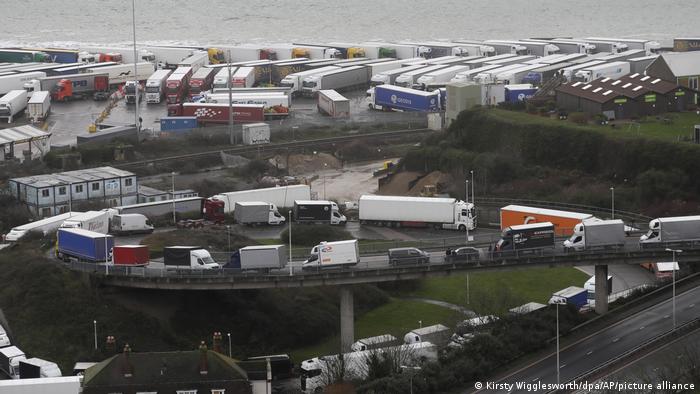 Freight transport and travel has been made less frictionless, in both directions, as a result of Brexit

German exports to the UK fell by roughly 30% in January year-on-year, according to preliminary data released by the country's statistics office on Tuesday, citing Brexit and the coronavirus pandemic.

DeStatis, Germany's Federal Statistics Office, said it was the highest year-on-year decline for any month since the financial and economic crisis in 2009 when exports fell by 17%.

The report also said that since 2016 — the year of the Brexit referendum — German exports to the United Kingdom have steadily declined.

Last year, German companies exported goods and services worth €66.9 billion, In 2015, that figure was €89 billion.

Britain left the EU's single market and customs union on January 1, meaning companies have had to grapple with new red tape to do business across EU borders.

Agricultural exports — in particular food and meat — have been particularly badly hit.

One of Britain's largest business groups said last month that many small companies were facing an "existential" threat as they grappled with obstacles Brexit has imposed on commerce.

About half of UK exporters are experiencing difficulties owing to confusion over paperwork, higher costs, and delays to shipments, according to a survey of 465 firms by the British Chambers of Commerce

Imports to Germany from Britain are also suffering, falling almost 10% last year, according to the preliminary German figures.

The statistics agency will publish more complete data for German-U.K. trade on March 9.