Brexit has threatened the peace in Northern Ireland | Europe | News and current affairs from around the continent | DW | 10.04.2021 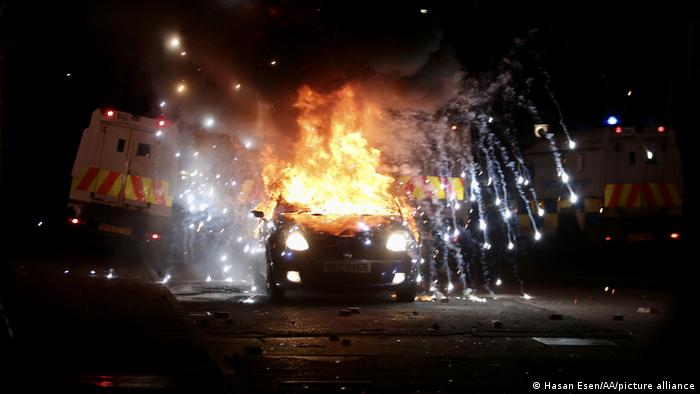 In the 23 years since the historic Good Friday Agreement peace deal ended three decades of brutal, bitter conflict in Northern Ireland, fears that widespread violence could return increased sharply after the 2016 Brexit referendum.

As the UK prepared to leave the EU, the former British prime ministers Tony Blair and John Major were among the politicians who were most adamant that Brexit could undermine the peace agreement.

Those fears were realized when riots and disorder broke out in Northern Ireland at the end of March. Dozens of police officers have been injured since, and a bus was hijacked and set on fire in a sharp escalation on Wednesday. The violence began on March 29 in a unionist enclave of Londonderry, or Derry, a city that also has a comfortable Irish nationalist majority. A group of about 40 people, many of them well under the age of 18, threw projectiles, including a petrol bomb, at police.

Since then, there have been outbreaks of similar violence in a handful of cities and towns, mostly in unionist areas. The disorder worsened on Wednesday night, when a so-called peace wall separating nationalist and unionist communities in Belfast was breached and skirmishes broke out involving youths from both sides.

The riots have almost exclusively involved unionists. The violence has been widely linked to long-simmering anger about the Northern Ireland Protocol, the special post-Brexit trade arrangement that has created additional trade barriers between Britain and Northern Ireland.

Many unionists believe that the terms of the protocol, commonly referred to as the "Irish Sea border," weaken Northern Ireland's status within the United Kingdom and draws it closer to the Republic of Ireland, an EU member state, making Irish unification more likely.

Well-documented shortages of certain products in Northern Ireland in the early months of 2021 as well as other early complications, have exacerbated frustrations. The largest loyalist party, the Democratic Unionist Party (DUP), has collected more than 140,000 signatures for a petition calling on the UK government to withdraw from the protocol.

Threats of violence were quick to surface. In January, EU inspections of animal-based food produce arriving at Belfast and Larne ports from Britain were briefly suspended because of concerns that staff carrying out checks were being intimidated. Graffiti threatening port staff had been appearing regularly since the protocol came into effect.

Several unionist commentators and politicians have suggested that another trigger for the violence was the decision at the end of March by the Police Service of Northern Ireland not to prosecute anyone in the main nationalist party, Sinn Fein, for the fact that many of its leading figures had attended a funeral in June that contravened pandemic lockdown rules.

Arlene Foster, the leader of the DUP and the current first minister of Northern Ireland, retweeted a video of the bus being attacked with a petrol bomb on Wednesday and wrote that such actions "only serve to take the focus off the real law breakers in Sinn Fein."

The nature of the violence so far shows that what is happening is not simply political protests gone wrong. Many of those taking part in attacking police have been teenagers or younger. The scenes have been chaotic, with little in the way of coherent political messaging.

Much of the violence has occurred in areas where criminal gangs connected to loyalist paramilitary groups are strongest. In a statement issued on Friday, a group representing paramilitary squads such as the Ulster Volunteer Force, Ulster Defence Association and Red Hand Commando denied any involvement in the violence.

Several prominent unionist commentators have noted that the violence in these areas has coincided with a major recent clampdown by the UK government's Paramilitary Crime Task Force on the major gangs that are dealing drugs in the areas. In other words: Criminals under serious pressure from law enforcement have exploited real political discontent for their own ends. 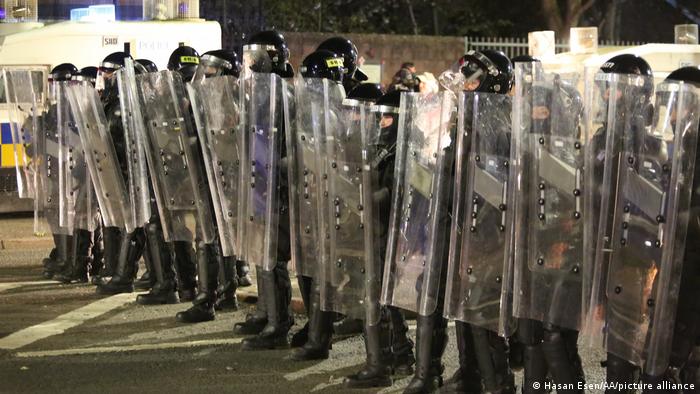 Riot police have been deployed across Northern Ireland as protests continue

There is deep and genuine discontent within broad swaths of political unionism over the Northern Ireland Protocol. However, Irish nationalist parties such as Sinn Fein and the SDLP, as well as the nonaligned Alliance Party, would argue that the problem is not the protocol but Brexit in the first place.

The implications for Northern Ireland were barely mentioned during debates ahead of the referendum. The likes of Blair and Major were notable exceptions in Britain. However, many politicians in the Republic of Ireland issued warnings that a Leave vote could have disastrous consequences for Northern Ireland, as did the Alliance Party and the Irish nationalist parties.

A problem for the DUP in this regard is that it passionately campaigned for a Leave vote and even helped fund "Vote Leave" ads in Britain. Then, during the torturous Brexit negotiations, the party rejected proposed arrangements that would not have had an impact on trade between Northern Ireland and the rest of Britain in order to push for a harder Brexit.

During the years between the 2016 vote and the UK's full departure on January 1, 2021, fears of renewed violence were based on the idea of a return to a border between Ireland and Northern Ireland — something that would inflame nationalists.

Leo Varadkar, the Republic of Ireland's prime minister at the time, brought a newspaper article about a fatal 1972 attack on a customs post to a 2018 EU summit to convince his fellow leaders of the need to avoid a border. In the end, the resurrection of that hard border on the island of Ireland was avoided. But violence has not been.

Brexit alone can hardly be blamed for the latest flare-up of the deep sectarian conflict that has endured for more than 400 years. But, from the moment that seismic referendum result was confirmed nearly five years ago, it was clear that at least one community in Northern Ireland's fragile, complex divide was going to lose out.

Though the vast majority of people in Northern Ireland — whether they be nationalist, unionist or neither — are appalled by the violence, hardly anyone is surprised by it.

Trimble was instrumental in ending 30 years of violence that killed more than 3,500 people in Northern Ireland. British PM Boris Johnson and Irish Prime Minister Micheal Martin have led the tributes.