European leaders reacted with sadness over the weekend to the death of former United States President Ronald Reagan, who died of pneumonia on Saturday at age 93 in his home in California. 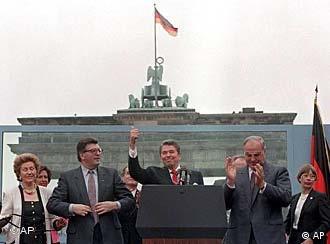 In a 1987 visit to Berlin, Reagan called on the Soviets to 'tear down' the Wall.

Political leaders across Europe, especially in the former Soviet-controlled Eastern Europe, on Sunday eulogized former U.S. President Ronald Reagan for dedicating his office to fighting to end the Cold War. In a 1987 trip to Berlin, he famously sent an unforgettable message to the then-Soviet leader Mikhail Gorbachev. "Mr. Gorbachev," he said, "tear down this wall"!

Following his death on Saturday after a long battle with Alzheimer's disease that took him out of the public eye a decade ago, European leaders reflected on his achievements.

DW-WORLD has rounded reactions from Germany and the rest of Europe, including that of Gorbachev, who was one of the first to honor the passing of the president.

"I feel great regret. Reagan was a statesman who, despite all disagreements that existed between our countries at the time, displayed foresight and determination to meet our proposals halfway and change our relations for the better, stop the nuclear race, start scrapping nuclear weapons, and arrange normal relations between our countries." -- former Soviet leader Mikhail Gorbachev

"He was a stroke of luck for the world. (Two years after Reagan called on Gorbachev to tear down the wall, he noted, it fell.) Two years later the Wall fell and 11 months later Germany was reunified. We Germans have much to thank Ronald Reagan for." -- former German Chancellor Helmut Kohl

"His commitment to overcome the East-West conflict and his vision of a free and reunified Europe helped bring about the conditions that finally made German reunification possible." -- German Chancellor Gerhard Schröder

"I was deeply hit by the news about the death of Ronald Reagan. He was a man of firm principles who was indisputably instrumental in the fall of Communism." -- former Czech President Vaclav Havel

"President Reagan was one of my closest political and dearest personal friends. He will be missed not only by those who knew him, and not only by the nation that he served so proudly and loved so deeply, but also by millions of men and women who live in freedom today because of the policies he pursued. Ronald Reagan had a higher claim than any other leader to have won the Cold War for liberty, and he did it without a shot being fired. To have achieved so much against so many odds and with such humour and humanity made Ronald Reagan a truly great American hero." -- former British Prime Minister Margaret Thatcher

"When he saw injustice, he wanted to do away with it. He saw communism, and he wanted to put an end to it. We understood, without saying it, that we were workingin the same direction. We did not consult with each other, yet each knew that he could count on the other." -- Solidarity founder Lech Walesa

"The Pope received the news of President Reagan's death with sadness. Two days ago, when he met President Bush at the Vatican, the Pope sent a warm message of best wishes to Mrs Reagan, knowing that her husband was very sick." -- a spokesman for Pope John Paul II

"A great statesman who through the strength of his convictions and his commitment to democracy will leave a deep mark in history. " -- French President Jacques Chirac

"Reagan will be remembered as a good friend of Britain.The negotiations of arms control agreements in his second term and his statesmanlike pursuit of more stable relations with the Soviet Union helped bring about the end of the Cold War. He will be greatly missed by his many friends and admirers on this side of the Atlantic." -- British Prime Minister Tony Blair

"President Reagan was a determined opponent of Communism and he played an important role in bringing an end to Communism and to the artificial division of Europe imposed after the Second World War. This process culminated in the accession of ten new member states to the European Union at the beginning of May this year." -- Irish Prime Minister Bertie Ahern